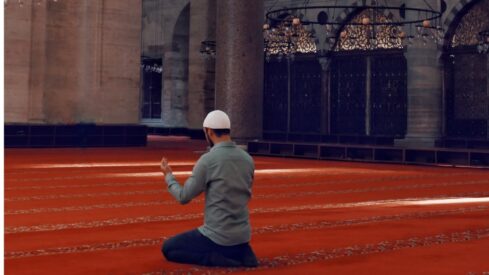 The rapid shift from obeying Allah Almighty in Ramadan to disobeying Him and moving away from His way after Ramadan has its reasons, the most important of which are the following:

Absence or lack of sincerity during the acts of worship that used to be performed: This insincerity is exemplified in the person who performs prayer or pays charity so that people will see him. In doing so he may achieve a certain rank, some material benefit from them, or the like. Such a person does not perform acts of worship with the intention of pleasing Allah Almighty, and achieving a great reward in the Hereafter.

Absence of concentration during the performance of the acts of worship despite the presence of sincerity: This leads to the person not benefiting from performing such acts, not filling the heart with faith and not drawing his heart closer to his Lord, a thing which would have prompted him to persist in doing good and abandoning evil.

Lack of moderation in acts of worship, being over enthusiastic and exerting much effort than that which each person can bear: This makes the soul change afterwards because it does not possess the quality of persistence. This happens although the Messenger (peace and blessings be upon him) ordered us to do those deeds which are within our capabilities.

Weakness of the soul and its yielding to the insinuations of the devil: This occurs because of the absence of good company, or the companionship of bad people who one is unable to affect, so one is affected by it instead. Another reason is abandoning acts of worship suddenly, therefore, one’s soul becomes empty and likely to be filled with devilish insinuations and love of committing acts of disobedience.

The soul’s need for recreation after periods of patience in Ramadan: This makes it seek the utmost enjoyment, as compensation for what it has missed. So it indulges in pleasure until it surpasses the wide range of the lawful and enters into the unlawful.

In order to cure this shift, which may afflict some people in different degrees that vary from one person to another in degree and form, one has to apply the following means, the most of which are in fact the opposite of the above reasons:

Gradual training to be sincere when performing every act: Each act should only be performed with the intention to please Allah Almighty, to gain His reward, and to benefit from it by enjoying happiness in this world and reward in the Hereafter. This can be achieved through hiding the act as much as possible, not mentioning it afterwards, and bearing good intentions while doing it. Then one is to ask Allah for His help and support and supplicate to Him to help you resist devilish insinuations of ostentation while performing the act. After that, one should ask for Allah’s forgiveness for any ostentation that may have been felt during or after the act and the person should have the firm will to not repeat feelings of ostentation in following acts.

Gradual training on concentration during the different acts of worship through not performing too many acts and being moderate: What is important, for example, is not reading too many chapters of the Qur’an but rather it is enough to read some verses with contemplation followed by practicing what is understood. Furthermore, repeating one or two of the supplications of remembering Allah with due contemplation that moves the heart, is much better than repeating many supplications without gaining any benefit, and so on.

Looking for good company like that which was available in Ramadan, merging with it, and clinging to it, for it serves as a shield against devilish insinuations. The Messenger (peace and blessings be upon him) says, “Indeed, the wolf eats of sheep only the faraway one.” (Reported by Abu Dawud with a good chain of transmission). Keeping good company supports you to continue in obedience; it was reported that the Prophet (peace and blessings be upon him) said, “A person follows the religion of his friend; so each one of you should consider whom he makes his friend.”

Avoidance of sudden slackness after Ramadan or abandoning the acts of obedience: One should continue to perform acts of worship after Ramadan even in a lesser form. Perhaps this is one of the wisdoms inferred from the hadith in which the Messenger (peace and blessings be upon him) says, “He who observed the fast of Ramadan and then followed it with six (fasts) of Shawwal; it would be as if he fasted perpetually.” (Muslim) Maybe observing fast for some days in Shawwal, and by analogy, performing some rak`ahs of optional night prayer, some prayers in the Mosque, reciting some verses of the Qur’an, paying some charity, and doing other acts of obedience that used to be observed during the honorable month would prevent sudden emptiness in the soul. This is intended to remind the soul of the sweetness and good effects of worship and to keep the inner joy that was attained during Ramadan. This makes one try not to lose such pleasure, so that at least one would persevere in doing the minimum level that achieves this pleasure.

Preparation of lawful recreation: The soul leaves Ramadan while it needs some rest and recreation. This can be attained through trips, journeys, contests, games, visits, and other permissible worldly pleasures. If the soul does not find this recreation by permissible means, it might get depressed and weakened, discontinue obedience, or even look for enjoyment in prohibited matters!

Supplication to Allah for whoever has changed after Ramadan: People should supplicate such a person, as their supplication will eventually be answered. The Messenger (peace and blessings be upon him) says, “Whenever a Muslim servant supplicates for his brother in his absence, the Angel says: Amen, and the same be for you too.” (Muslim) This person should supplicate for himself as well.

Finally, it has to be taken into consideration that curing and educating souls need gradual advancement, patience and a long time, just as the Qur’an and the Messenger (peace and blessings be upon him) did with the Companions (may Allah be pleased with them), for souls are not like paintings that can be drawn or painted in a day or two.