From Drury Lane to Makkah 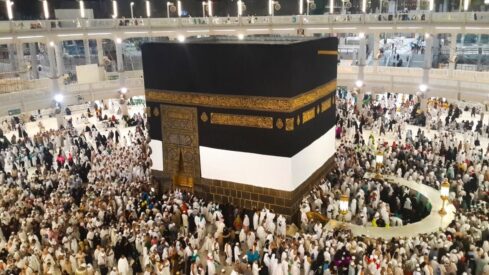 History has not recorded the name of the first British Muslim to carry out the rites of Hajj. Rumors abound of converted Crusaders who made the trip in medieval times, and of British Muslims in Ottoman naval service who visited the hallowed precincts in the seventeenth and eighteenth centuries. But the first detailed account of the Hajj by an English Muslim had to wait until the Edwardian era, when the artist Hedley Churchward became the first recorded British ‘Guest of God.’

Like many Anglo-Muslims of his day, Churchward was the conservative, gentlemanly scion of an ancient family; indeed, his ancestors possessed the second oldest house in Britain . His father ran a successful business in Aldershot , and was well-received in regimental circles, enabling the young Churchward to meet Queen Victoria and the philanthropist Baroness Burdett-Coutts. Showing an early artistic talent, Churchward studied art and became a recognized painter, specializing in the then highly prestigious field of theatrical scene painting. A familiar figure in London’s West End in the 1880s, he worked closely with celebrities as varied as Tennyson, Millais, Lord Leighton, and the most famous of all Victorian ‘supermodels’, Lily Langtry.

A leisurely trip through Spain opened the young scene-painter’s eyes to the glories of Moorish architecture, and he was tempted to venture across the Straits to Morocco . Here, in a world still untouched by Western influence, he quickly fell in love with the gentle and beautiful lifestyle of Islam. After several visits, he gravely announced to his startled family that he had become a Muslim.

Churchward traveled on to Cairo, where he studied for several years at Al-Azhar, the Muslim world’s highest seat of learning. His scholarship developed apace, enabling him to preach Friday sermons at a small mosque, and even landing him an appointment to the prestigious post of lecturer in Sira (the Prophet’s biography) at the Qadis’ Academy – no small achievement for a convert.

In need of more lucrative work, Churchward then sailed for South Africa, where his art and his elegant drawing-room manner soon won him the favor of Cecil Rhodes, who made him the gift of a rare pink diamond. Moving effortlessly between the Muslim community and the Transvaal ’s white elite, it was thanks to Churchward’s earnest intercession that President Paul Kruger granted permission for the erection of the first mosque in the Witwatersrand goldfields.

On his return to Cairo , Mahmoud Churchward married the daughter of a prominent Shafi‘i jurist of Al-Azhar, and continued his Arabic lecturing. But both his head and his heart told him that his Islam was not yet complete: the magnetic pull of the Fifth Pillar was becoming impossible to resist. As he later recorded: ‘One evening, as I strode along the looming Pyramid in the sunset, and saw the jagged skyline of Cairo behind the dreamy African dusk, I decided to carry through what I had intended to do ever since I turned a Moslem – I would go to the Ka’aba at Makkah.’

As an Englishman he realized that this ambition might prove hard to fulfill: there was a danger that the Caliphal authorities at Jeddah might distrust the sincerity of his claims to be a Muslim, and unceremoniously turn him away. He therefore petitioned the senior ‘Ulema (scholars) for a letter of recommendation. In the awe-inspiring presence of the Chief Qaadi (judge) of Egypt, together with Shaykh al-Islam Mehmet Jemaluddin Efendi (the Ottoman Empire’s highest religious authority, who happened to be on a visit to Cairo), he submitted to a three-hour examination on difficult points of faith. Passing with flying colors, he received a beautifully-calligraphed testimonial signed by the scholars present. This religious passport was to serve him well in overcoming the bureaucratic obstacles which lay ahead.

In 1910, after a further year in South Africa , the would-be Hajji packed his trunks and set out from Johannesburg for the Holy Land . Steamers in those days were slow, and Churchward faced the added impediment of having to travel via Bombay , where he spent weeks in frustrating negotiations with shipping-clerks, officials, and an urbane Lebanese Christian who was the Ottoman consul. At last he found an elderly pilgrim ship, the SS Islamic, and this vessel, captained by an irascible Scotsman and armed with cannon against the threat of pirates, chugged slowly across the shimmering heat of the Indian Ocean, visiting the poverty-stricken Arabian Gulf before wending its leisurely way up the Red Sea.

The days passed slowly, and the time for Hajj was fast approaching. Steaming at six knots, halting at small ports to deliver sacks of mail, which had to be handed over with six-foot tongs because of the fear of plague, there was little to do except watch the dolphins, eat curry, and pray on deck with the Indian pilgrims.

Landing briefly at the Sudanese port of Suakin, Churchward dropped in on the British Consul, who airily told him that his plans to visit Makkah were doomed. ‘My dear chap,’ he told him, sipping an iced drink on the Consular veranda, ‘to begin with you will not be allowed to land at Jeddah.’

But two days later, the Islamic steamed into the roadstead of the Arabian port. ‘On the Indian deck,’ he recorded, ‘there started a great packing of pots, portable stoves, babies and sacks of rice.’  It proved necessary to row ashore in a small dinghy, plunging through the hot spray past a Turkish battleship that had been moored for so long that the coral had grown up around it, immobilizing it forever. Once his little boat was beached on the sands, a short conversation with the Ottoman officials established that all was well, and Churchward went into the town to make contact with the local representative (wakil) of Sharifa Zain Wali, a rich businesswoman of Makkah who ran a large organization of mutawwifs – pilgrim guides. Naturally, she could not attend him here in person – as Churchward later observed: ‘Owing to the immense numbers of pilgrims, hundreds of thousands, who reach Jeddah each year, it is as impossible for these much-respected dignitaries to escort their customers personally as it would be for Mr. Thomas Cook to chaperone every Cockney globe-trotter through Europe. Like all her colleagues, she employed a considerable staff, who saw that the Hajis carried through the ritual prescribed by the Prophet.’

The Wakil took Churchward to his beautiful Arab house, and explained how to don his Ihram clothing before letting him settle down for the night. ‘Finding a level place on the irregular stones I lay down anew’, he wrote. ‘This time a thousand million mosquitoes hovered over me.’  The following day, he telegraphed most of his money through to Makkah, and entrusted, as was the custom, the remainder of his funds to the Mutawwif. That evening, ‘while the lamps of Jeddah glowed in a tropic sunset, two donkeys arrived.’  The road beyond Jeddah was little more than a camel track, but the Wakil confidently led the small party towards the nocturnal east, with Halley’s Comet hanging splendidly among the stars above. ‘Against the stars I saw rock faces; we seemed to be trotting through a kind of canyon. Saving the fall of our donkeys’ feet there was nothing to be heard, not even a jackal. … Bang!  Explosions suddenly rang from some place high in the dark hills. No mistake, those were rifle shots … The growing brightness showed a very picturesque old building, a kind of tower several hundred feet above the road. From the steep path serving the structure some fez-adorned figures ran down. They wore uniforms and held guns in their hands.’

An Ottoman officer came up, and politely explained that his men had successfully chased off a band of robbers. In those days, attacks by desert Arabs on pilgrims were distressingly common; but Churchward and his party rode on, trusting in Allah. In the oven-like heat of the early afternoon, after several stops at roadside coffee-houses, they passed the stone pillars which indicated the beginning of the sacred territory into which no non-Muslim may intrude.

‘On entering here my guide signed to me that we should say the proper prayer. Touching his heart and forehead he muttered the Fatiha (opening chapter of the Qur’an) and held his hands together as if to receive Heaven’s blessing. Then he said, Hena al-Haram (Here is the Holy Ground).’

‘Some pigeons, wild doves and other birds were the first specimens of desert fauna I came on. They appeared perfectly tame, and fluttered a few inches from our faces. Some sat on the hard stones and allowed the donkeys to go right upon them. Very carefully the Wakeel led his beast around the little creatures, for no man will dare to kill a living thing here.’

In the Holy City at last, after almost two days on the road, Churchward and his companions entered the tall mansion-cum-hotel of the Sharifa. This pious and aristocratic lady, a direct descendent of the Holy Prophet, had family connections in Cape Town , where her company of pilgrim guides had been recommended to Churchward. Unpacking his goods, he sent her a gift of a Gouda cheese, which was borne up to her unseen presence by excited servants. The Sharifa herself shortly called to him from behind a wooden mashrabiya screen: ‘Mubarak!  Welcome to my house.’  ‘I replied that I felt proud to live in her house, whereat she answered that she was proud of me. ‘The Kafirs make good cheese,’ declared the lady, ‘they must have many cows.’’

The English pilgrim struggled up seven flights of stairs, bathed, and slept on the roof. He was awoken before dawn by the strange lilting sound of Ottoman bugles, and after prayers and a breakfast of melons he set off behind the Mutawwif towards the Sacred Mosque. Taking care to scuff their feet disdainfully on some well-worn flagstones, which the Mutawwif declared were some former idols of Quraish which had been cast down there by the Prophet to be humiliated, Churchward and his companion finally entered the House of God. The first stage of a five-month journey had finally come to an end.

The Description of the Prophet (Pbuh) by the companions

The prophetic approach to strengthening self-confidence

Types of actions of the Messenger, may God bless him and grant him peace

The Prophet’s seeking for forgiveness

Shaping the Economy of Madinah by the Prophet (Pbuh)

O Prophet, Why should you forbid (yourself) what God has made lawful for you, in order to please your wives?
Top Reading
1
The Messenger is not sent except in the language of his people
2
Lessons on the patience of female companions around the Messenger
3
The celebration of Muhammad’s birthday
4
Ramadan and the Lunar Calendar
5
A Short Account of How Islam Began in Makkah and Was Completed in Madinah
6
Why Muslims Should Support Intelligent Design?
7
The Rights of Children on Parents in Islam
8
The Prophet’s Forgiveness of His Enemies
9
The Prophet’s Inexhaustible Patience
10
Freedom in the Prophet’s Era