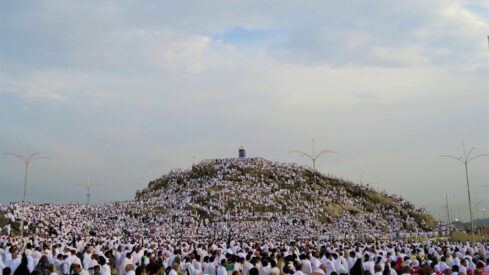 After you have made the necessary preparations – paid your debts, repented, absolved yourself of any wrongdoing toward others, etc. – you are ready to take the first step in the blessed journey: ihram.

The word ihram is used for three meanings:

1. The two pieces of cloth worn by male pilgrims.

3. The state of consecration in which the pilgrims are during Hajj or `Umrah. After putting on ihram (first meaning) and making the intention of ihram (second meaning), the pilgrims enter automatically the state of ihram, which requires them to avoid certain things. Below are more details on ihram in its three senses.

How do I put on ihram?

Cleanliness is recommended before putting on the clothing of ihram. It is recommended that you clip finger and toe nails, shave off armpit and pubic hair, comb the hair and beard, trim the moustache, bathe (perform ghusl) or at least make wudu’. Men, but not women, are also recommended to put on perfume.

For men, the clothing of ihram comprises two sheets of cloth. One is wrapped round the upper part of the body except the head. It is normally draped over both shoulders but in certain times it is to be draped over one shoulder. This will be discussed later. The other is wrapped round the lower part of the body. You can fix this piece by a belt, a money belt, or a pin.

For women, the ihram is ordinary loose-fitting clothes that cover all of the body except the face and hands. In some countries it is a tradition for women to wear special clothes, such as white dresses or black cloaks, for ihram, but this is not required.

There are no restrictions as for women’s footwear. But for men, footwear should not cover the toes and ankles. Socks and shoes, therefore, should not be used by men.

Putting on ihram is the first step in Hajj and `Umrah. As mentioned above, you first put on ihram and then make the intention of starting Hajj or `Umrah (the second meaning of ihram). You can put on ihram in your home or wherever you want, provided that when you intend to start Hajj or `Umrah, you are dressed in the clothing of ihram.

As you will see later in this article, there are prescribed places that you should not pass before putting on ihram and making the intention of starting Hajj or `Umrah.

How, where, and when do I start pilgrimage?

Now after putting on the clothing of ihram, you are ready to start your pilgrimage by making the intention of starting Hajj or `Umrah. It is recommended to make the intention after performing one of the obligatory prayers or after praying two rak`ahs. You express this intention by saying, in the case of `Umrah, “Labbayka, Allahuma, `Umrah” (O Allah, I answer Your call by performing `Umrah). As for Hajj, the intention varies according to the mode of Hajj you choose:

1. In ifrad Hajj, you are going to perform only Hajj and therefore you make the intention of Hajj saying “Labbayka, Allahuma, Hajjan” (O Allah, I answer Your call by performing Hajj).

3. In qiran Hajj, you are going to combine `Umrah with Hajj, so you make the intention of both `Umrah and Hajj saying “Labbayk, Allahuma, `Umratan wa Hajjan” (O Allah, I answer Your call by performing `Umrah and Hajj).

There are certain places at which you should make your intention. These places are called mawaqit (plural of miqat). You should not pass your fixed miqat without putting on the cloth of ihram and making the intention of ihram. These are five places:

1. Dhul-Hulaifah, a place southwest of Madinah and 18 km from its mosque. It is the miqat for the people coming from Madinah and beyond.

2. Dhat-`Iraq, a place 94 km to the northeast of Makkah. It is the miqat for the people coming from Iraq and beyond.

3. Al-Juhfah, a place 187 km to the northwest of Makkah. This was the miqat for the people coming from or passing through Syria and Egypt. It was on the eastern coast of the Red Sea, but it has completely disappeared and Rabigh (to the north of Al-Juhfah) is used as this miqat now.

4. Qarn Al-Manazil, 94 km to the east of Makkah. It is the miqat for the people of Najd and the pilgrims who pass by it.

5. Yalamlam, 54 km to the south of Makkah. It is the miqat for those coming from Yemen and the pilgrims who pass by it.

As mentioned in the article “About Hajj and `Umrah”, there is a prescribed time for Hajj: the months of Shawwal, Dhul-Qi`dah and Dhul-Hijjah. So making the intention of Hajj should take place in the period from Shawwal 1 to Dhul-Hijjah 9. It is not possible to start Hajj on Dhul-Hijjah 10 or afterwards because this means missing the ritual of staying in `Arafah on the day or night of Dhul-Hijjah 9, which is one of the pillars of Hajj.

What are the prohibitions while in the state of ihram?

1. Clipping nails and shaving hair from any part of the body.

2. Using perfume in any way.

5. Hunting or eating from game meat. Pilgrims are forbidden to hunt, help in hunting, or eat of any land game prepared for their sake, at their suggestion, or with their help.

7. For women, wearing Niqab or gloves.