Al-Aqsa Mosque & the Dome of Rock 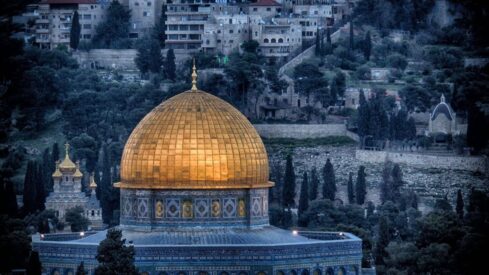 Al-Aqsa Mosque (in Jerusalem) was the first of the two qiblahs (prayer direction), and is one of the three mosques to which people may travel for the purpose of worship. It is said that it was built by Sulayman (Solomon, peace be upon him), as stated in Sunan an-Nasa’i and classed as authentic by al-Albani. And it is also said that it existed before Sulayman (peace be upon him) and that Sulayman rebuilt it; this is based on the hadith reported by Al-Bukhari and Muslim on the authority of Abu Dharr (may Allah be pleased with him) who said: “I said, ‘O Messenger of Allah, which mosque was built on earth first?’ He said, ‘Al-Masjid Al-Haram [in Makkah].’ I said, ‘Then which?’ He said, ‘Al-Masjid Al-Aqsa.’ I said, ‘How much time was there between them?’ He said, ‘Forty years. So wherever you are when the time for prayer comes, pray, for that is the best thing to do.’”

The Prophet (peace and blessings be upon him) was taken on the Night Journey (isra’) to Bayt Al-Maqdis (Jerusalem), where he led the Prophets in prayer in this blessed mosque. Allah says: [Glory to (Allah) Who did take His servant for a Journey by night from the Sacred Mosque (Al-Masjid al-Haram) to the farthest Mosque (Al-Masjid al-Aqsa), whose precincts We did bless, in order that We might show him some of Our Signs: for He is the One Who heareth and seeth (all things).] (Al-Israa’ 17:1)

The Dome of the Rock was built by the caliph `Abd Al-Malik ibn Marwan in 72 AH. It is mentioned in Al-Mawsu`ah al-Filastiniyyah (4/203): “The name Al-Masjid Al-Aqsa was historically applied to the entire sanctuary (Al-Haram Al-Sharif) and the buildings in it, the most important of which is the Dome of the Rock which was built by `Abd Al-Malik ibn Marwan in 72 AH/691 CE, which is regarded as one of the greatest Islamic historical buildings. But today the name is applied to the great mosque which is situated in the southern part of the sanctuary plateau.”

It also says in al-Mawsu`ah (3/23): “The Dome of the Rock is situated in the middle of the plateau of Al-Masjid Al-Aqsa, which is in the southeastern part of the city of Al-Quds (Jerusalem). It is a spacious rectangular plateau which measures 480 meters from north to south, and 300 meters from east to west. This plateau occupies approximately one-fifth of the area of the Old City of Jerusalem.

We have already seen above that the name of the mosque was historically applied to the whole plateau. The Muslims’ fondness for the picture of the Dome may be because of the beauty of this building, but this does not excuse them from the resulting mistake of not distinguishing between the Mosque and the buildings that surround it.

Read more in this series: "Al-Israa' and Al-Mi`raj" 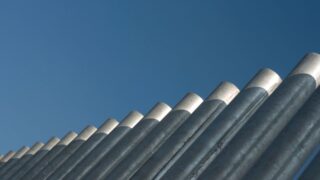 Muslims will often say to those of the Christian faith, “We love Jesus too.” as a prophet.