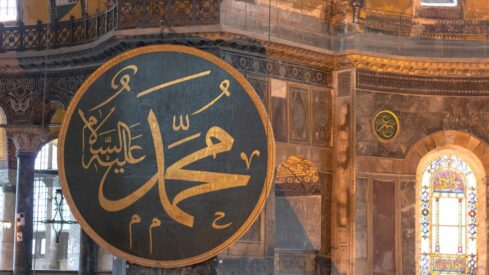 Is there anyone who does not know Muhammad, the Prophet of Islam?

To us – Muslims – he is the revealed mercy, the bright light, the fountainhead of truth, the beacon of knowledge and religion. He is the establisher of the balance of truth when all balances tilted, the restorer of justice who gave everyone his due right, the emancipator of slaves, and the raiser of the banner of righteousness and monotheism.

Yes, he was all this and much more! He was best of the best; the ideal human being. May Allah’s peace and blessings be upon him!

Indeed, Prophet Muhammad, peace and blessings be upon him, was a man who – with Allah’s Grace – became a whole ummah (i.e. nation or community) that spread over the entire world with one religion, one language, a joint history, as well as a religion-based fraternity.

As far as his social life is concerned, Prophet Muhammad was an orphan who lost not only his father, but also his mother at a young age. Nothing could be harder than losing one’s parents at a very early age! It did not stop there as he later lost his grandfather who supported him and took good care of him as a child. What did he do afterwards?

Did he withdraw into an isolated corner? Or, did he hide himself in a dark place? Or, did he find himself a small shell to confine himself to? No, he did not do or even think of any of these options. On the contrary, he set out – with a firm will – to defend humanity, support the weak, establish the right of the wronged, and console the injured.

Indeed, Muhammad was a single man who succeeded in creating a whole progressive ummah; he made history and wrote down lengthy pages of magnanimity, nobleness, and humaneness that have never been preceded and will never be repeated. He was successful in doing this through endeavoring to prepare his own men; the men who would shoulder the responsibility of conveying the message of Islam to the whole world; the men who defied all forms of tyranny and injustice, whether practiced against Muslims or non-Muslims alike. They stood in the face of tyranny and sided with absolute justice, whether practiced by Muslim or non-Muslim individuals.

Men-making is one of the greatest issues that defy any educational and/or scholarly methodology. Indeed, the method of Islam, represented in the light of revelation and the strength of faith, is the best recipe for making men and heroes. Surely, this can be done only in accordance with what is destined by the Almighty.

Islam was revealed to a community sunk in ignorance. It brought with it a methodology that carries per se guidance, light, and goodness. It is a method that brings up righteous generations, refines their souls, helps them build civilizations, and gets man out of darkness into light. The Almighty says,

(O people of the Scripture! Now has Our messenger come unto you, expounding unto you much of that which you used to hide in the Scripture, and forgiving much. Now has come unto you light from Allah and a plain Scripture. Whereby Allah guides him who seeks His good pleasure unto paths of peace. He brings them out of darkness unto light by His decree, and guides them unto a straight path.) (Al-Ma’idah 4:15-16)

The moment one embraces Islam, one starts to feel the trust confided to him/her by the Almighty. Every single one of the Prophet’s Companions cherished the responsibility of calling for Allah and found sweet in any and all forms of torture and sacrifice. When those men devoted themselves to their faith, Allah liberated at their hands most of the territories of the inhabited world at the time. They founded a state with sovereignty, and they excelled over the Persians and the Romans.

Sayed Qutb, the late Muslim writer and thinker, says in his Dirasat Islamiyyah (Islamic Studies) under the title, Victory of Muhammad ibn `Abdallah:

Muhammad won victory the day he managed to render his own companions, May Allah be pleased with them, as real faithful believers who [as all mortals] eat food and walk in the markets. He gained victory the day he made each one of them an embodied model in which people could see Islam incarnated or mirrored in.

[Verily] Texts alone can do nothing. The Qur’an cannot be effective unless it fills one with its principles, values and guidance; and, principles cannot survive until they turn into real conduct.

Hence, Muhammad’s first priority was to build men rather than deliver sermons; to formulate consciences rather than put speeches in an elegant style; to establish a whole ummah rather than create an abstract philosophy… As for the conception, this was taken care of by the Noble Qur’an per se. Muhammad’s mission was then to turn the conception into real human beings.

Muhammad won the day when he managed to weave human beings using the fabric of Islam. When he turned their [internal] belief in Islam into action, he made many thousand copies of the Qur’an using no ink and/or papers, but, using the light [of Islam] and [their] page-like hearts. He, then, set them out to interact with all peoples in a give-and-take process that shows the latter the real essence of Islam.

Shortly, those Companions were taught by their ever-first master how to “emulate” the English proverb: Actions speak louder than words!

Truly, all this did not take place in the twinkling of an eye. Instead, it was achieved through the shedding of their blood and the spending of their most precious properties in the cause of Allah.

Following are the essentials of gaining victory and empowerment: as the faithful should (a) adhere to their firm belief, and (b) turn their internal belief into a practical reality that can be seen by the onlookers as represented in values, ethics, fair dealings, and effective acts of worship. In so doing, a Muslim becomes able to and capable of extending the just message of Islam to the whole world.

These were the things that changed the Companions of the Prophet and made them capable of making that huge leap from idolatry to leading the human race; from being the most humiliated people on earth into the most dignified ones; from an insignificant community into an ummah that leads the whole world and establishes an unprecedented civilization. It is Islam, the Qur’an and Prophet Muhammad who managed to change them and turn them all into that past wonderful reality. It is their keen following of the example of the Prophet that made them capable of absorbing all that he had to teach them about the Creator, life, and the Hereafter.

Finally, many are those who graduated from the Prophet’s faith-based educational institution. They did not get degrees from western or eastern universities; rather, they were graduates of the Prophet’s men-making plant more than 1400 years ago. To cite some prime examples only, we can mention Abu Bakr As-Siddiq (the reformer), `Umar ibn Al-Khattab (the inspired leader), `Uthman ibn `Affan (the openhanded), `Ali ibn Abi Talib (the unique genius), Mus`ab ibn `Umair (the peerless ambassador), Salman Al-Farisi (the brilliant philosopher), Abu Dharr Al-Ghifari (the faithful ascetic), Sa`d ibn Al-Rabi` (the altruist), and many more thousands who succeeded in rendering most of the globe under the merciful and goodness-bearer banner of Islam. They managed to educate the whole world about the Lord, Allah, Who created all from nothing and Who desires nothing but their own goodness.

Truly, as long as the Qur’an is here, the plant will maintain its faith-based production line!