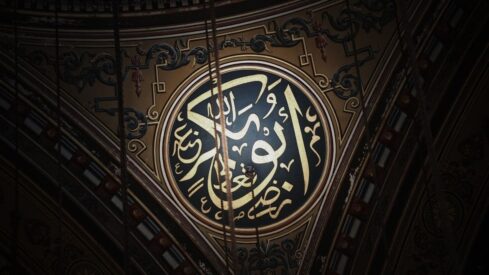 He is `Abullah ibn `Uthman ibn `Amir ibn `Amr from a branch of the Quraysh tribe. His father, `Uthman, was known as Abu Quhafa. His mother, Salma, was also known as Umm Al-Khayr.

From his early years, Abu Bakr was known for his good and upright nature. He was honest and truthful and came from a noble family. These things won him respect among the people. His goodness also won him the friendship of young Muhammad (peace and blessings be upon him). The two became fast friends in early boyhood. The friendship was to prove lifelong and history making.

When he grew up, Abu Bakr became a rich merchant, but he remained very kindhearted. When he saw someone in trouble, his heart melted and he did his best to help him. If his money could remove suffering, he did not care how much he had to spend. Once he gave away 35 thousand dirhams out of his total fortune of 40 thousand. He was so honest in his dealings that people kept their money with him. But above all, Abu Bakr had a sincere heart and a firm will. Nothing could stop him from doing what he thought was the right thing to do.

When the Makkans were intent on putting out, once and for all, the light of Islam, Allah commanded the Prophet to move to Madinah. In the burning heat of the midday sun, there was a knock at Abu Bakr’s door. The Messenger of Allah sought permission to enter, and after everyone else had left the room, he told Abu Bakr, “I must leave for Madinah tonight.”

“Will I also have the honor of going with you?” asked Abu Bakr eagerly. “Of course,” came the reply. “Get things ready.”

Abu Bakr was beside himself with joy. “I have been looking forward to this day for months,” he exclaimed. “I have kept two camels specifically to carry us to Madinah.”

It was Abu Bakr who made all the arrangements for the historic journey. For three days he and the Prophet (peace and blessings be upon him) lay hidden in the cave of Thawr. Abu Bakr’s slave tended flocks of goats near the cave all day and supplied them fresh milk for food. His son `Abdullah brought news about what the Makkans were doing.

The Makkans were searching for the Prophet like mad hounds. Once they came right to the mouth of the cave. Abu Bakr grew pale, fearing not for himself, but for the Prophet. However, the Prophet remained perfectly calm. “Do not fear,” he said to Abu Bakr. “Certainly Allah is with us.”

Of all the companions, Abu Bakr had the honor of being with the Prophet during the most critical days of his life. Abu Bakr knew full well what this honor meant and did full justice to the trust put in him.

After the Prophet’s death, Abu Bakr was chosen as the caliph. He served for only two years, three months, and ten days before he, too, passed away. During this short period, Abu Bakr was able to do great things for Islam that made his name immortal and placed him among the greatest men of all times.