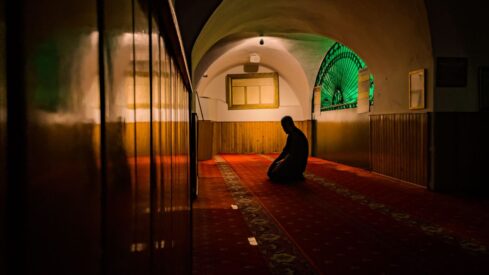 Recently, a very close member of my family died. While the dead body lay inside one of the rooms of my house, two thoughts continuously went through my mind. The body reminded me that one day, I would be lying in the same manner, motionless, and my close ones would be looking at me, remembering the treasured moments we had together.

Another thought that occurred to me was what would remain of the dead body while it lay so still, ready to be buried; and what it would take with itself for the Day of Judgment was a question that kept coming back to me again and again.

This question has been answered in the Qur’an in various places and it reminds us of the fact that death is the biggest reality of this life and the real struggle in this life should be to acquire good deeds so that one is able to attain a higher status in the Hereafter:

“Wealth and children are [but] adornment of the worldly life. But the enduring good deeds are better to your Lord for rewards and better for [one’s] hope.” (Al-Kahf 18:46)

The Qur’an has pointed out that in the creation of the heavens and the earth, the rising of the sun and moon are signs for those who believe in the meeting with their Lord:

“Allah it is Who raised up the heavens without visible supports, then mounted the Throne, and compelled the sun and the moon to be of service, each runs unto an appointed term; He orders the course; He details the revelations, that haply ye may be certain of the meeting with your Lord.” (Ar-Ra’d 13:2)

What we have to understand is how these signs indicate that there will be a Hereafter. One course of thought is that if God can create the heavens, earth, mountains and rivers then why can He not raise us all after we are dead. The second reasoning is that there is so much wisdom behind the creation of this universe and each object follows such an impeccable order, that it cannot be that the Creator of this galaxy with His infinite wisdom will treat the oppressed and oppressor in the same manner.

How can it be that one who commits murder and rape will be treated in the same manner as one who uses his wealth in helping the poor and needy?  That is why the Qur’an has said:

Another confirmation of the Day of Judgment through this message in the Qur’an:

“Respond to your Lord before a Day comes from Allah of which there is no repelling. No refuge will you have that day, nor for you will there be any denial.” (Ash-Shura 42:47)

From these ayahs (verses) we can say that the main purpose of this life is to prepare oneself for the Day of Judgment. The Qur’anic description of that day is one of distress and anguish for those who have committed more sins than good in this worldly life; the treatment of sinners is described as follows:

“Then indeed you, O those astray [who are] deniers, will be eating from trees of zaqqum, and filling with it your bellies, and drinking on top of it from scalding water, and will drink as the drinking of thirsty camels. That is their accommodation on the Day of Recompense.” (Al-Waqi’ah 56:51-56)

On the other hand, those who were righteous and God-fearing in this world will be granted a place in Heaven wherein lies great rewards for them. The rewards for such people have been described in many different places of the Qur’an.

What an individual has to remember is that he is answerable for his actions and God is watching over us all the time. God, exalted is He, keeps on reminding us that He is watching every action of ours and has informed all believers that He is All- Knowing and Wise:

“He knows what is in the heavens and earth and knows what you conceal and what you declare. And Allah is Knowing of that within the breasts.” (At-Taghabun 64:4)

God Almighty has said in the Qur’an that He created men and jinn for no other reason but to serve (worship) Him:

“I created the jinn and humankind only that they might worship Me.” (Adh-Dhariyat 51:56)

But, God did not leave man astray and gave him guidance in the form of His revelation so that he may be led to the right path:

“It is He who sends down upon His Servant [Muhammad] verses of clear evidence that He may bring you out from the darkness into the light. And indeed, Allah is to you Kind and Merciful.” (Al-Hadid 57:9)

This is how God describes the characteristics of one who will be awarded a place in Paradise:

“Successful indeed are the believers, who are humble in their prayers, and who shun vain conversation, and who are payers of the poor-due; and who guard their modesty -Save from their wives or the (slaves) that their right hands possess, for then they are not blameworthy, but whoso craves beyond that, such are transgressors -and who are shepherds of their pledge and their covenant, and who pay heed to their prayers.” (Al-Mu’minun 23: 1-9)

God Almighty has assured man that He is very forgiving and will forgive his past sins if he repents:

“Say, ‘O My servants who have transgressed against themselves [by sinning], do not despair of the mercy of Allah. Indeed, Allah forgives all sins. Indeed, it is He who is the Forgiving, the Merciful.” And return [in repentance] to your Lord and submit to Him before the punishment comes upon you; then you will not be helped.’” (Az-Zumar 39:53-54)

We as individuals should try to read the Book of Allah more often so that we are guided towards the right path and so that the concept of death does not become a shock for us but a warning that one day we will all die and will be answerable to our Lord for our each and every action.

It is our responsibility to read the Qur’an with understanding so that we can comprehend the message of God and the purpose of this life becomes clearer to us all. The Qur’an is Allah’s mercy upon His creation and we should not neglect the warning that the Book of God sends to the whole of mankind. The Qur’an has further ensured mankind that in its reading do hearts find ultimate rest and peace:

The main point behind this article is to remind each reader that one day we will all have to go back to our Lord. Hence, we must strive to earn good deeds in this world, as this life will be our only opportunity to present something in front of God on the Day of Judgment.

The funeral, thus, should not be confined to just a ceremony but serve as a reminder to each of its participants that our return is to our Lord and the only thing that will help us on that Day will be good deeds.

May Allah guide us all to the right path and help us in earning good deeds and may He forgive our past sins.