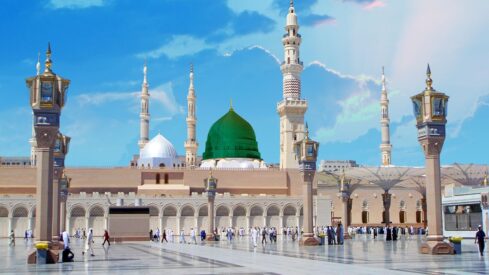 A sister once told me that she and her family had made hijrah to Egypt but that she couldn’t have come without her microwave oven. Hmmm. That struck me as perhaps not being in quite the same spirit as the Muhajirun who emigrated from Makkah in 622 CE. But then again, maybe that’s just because when I lived in Los Angeles, I was the only person there who didn’t own a microwave.

The Muhajirun left behind not only their property but often their families, too. At that time there were very few households in which everyone was Muslim. Most families were split, with one spouse or one child Muslim and the rest of them pagan. Those who emigrated never knew if they would see their family members again. No photographs to remember them by, no weekly telephone calls or e-mails to those left behind. But the Muhajirun were willing to make the sacrifice.

Today there are still many who revert to Islam and find themselves cut off by their families. If they are still living at home at the time of their reversion, they may actually be kicked out. If they’re not still living at home, their families may just cut their relations with them. (To be fair, there are also families who don’t ostracize their Muslim member, even if they do think he or she has “gone off the deep end.”) Yet people continue to revert, unable to deny the truth any longer. So, though they may not actually move to a new land, they are in some respects like the Muhajirun, that is, in need of help.

But where are the Ansar today?

We often hear about the great sacrifices that the Muhajirun made, but they couldn’t have left Makkah without the Ansar, the Muslims of Madinah who helped them.

The Ansar did more than open their homes and help the Muhajirun financially. They knew full well that by pledging to protect Muhammad and his followers, they were challenging the whole of Arabia. We know that they realized that, because one of them stood up and warned the others just before they pledged.

Are there many of us today who are willing to help our fellow Muslims if there is any sort of risk involved? I’m afraid that where we are living comfortably, too many of us don’t want to “get our hands dirty” or get involved.

Another great thing about the Ansar. Before they became Muslim, they were divided into two tribes, Aws and Khazrah. And I mean divided, frequently at war with each other. Yet when they accepted Islam, they were able to overcome those differences and unite under Muhammad’s leadership. No more “my dad can beat your dad.” These people were serious in their devotion to Islam.

Today we see too many of us divided over minor issues—even ones as petty as the style of each other’s clothes or the length of veil or beard. Or we take an issue on which there is not unanimous consensus and let that be the basis by which we judge others. Rather than looking at the 90 percent on which we agree, we focus on the 10 percent on which we disagree. Thus we make no progress, always squabbling over petty details while our enemies continue to mow us down (literally or figuratively), drain our coffers, humiliate and debilitate us.

Where are the Ansar?

When my husband and I visited Madinah some years ago, I commented to our host that I was disappointed that the Prophet’s house and original mosque had not been preserved as a museum. I would have liked to see the simple way he lived. (I can see it now—an Arab Williamstown with the reconstructed or preserved buildings, the main part of each room roped off, all the artifacts left “just the way the owner left it,” employees in period costumes, $20 admission.) Our host replied that, first of all, the mud brick they used back then didn’t last long, so there was no way to preserve it. And that that was not in the spirit of Islam, Islam was for progress.

Some of us are suffering as the Muslims of Makkah did—sometimes worse—but the question remains, where can we go that’s better?

Well, yes, we should be progressing materially, while not letting that become our be-all end-all. In fact, the Prophet’s main concerns in Madinah were not for the economic revival or the pursuit of wealth, but simply that the Muslims might be safe and secure—able to walk the streets without being hassled or molested—and free to worship.

As the beginning of another Hijri year arrives, we need to take stock of where we stand as individuals and as an Ummah. In some part of the world we are facing more restrictions on our freedom of religion, especially our right to dress in accordance with our religion. As a repercussion of numerous attacks, in some places we are still assaulted, harassed, or unjustly treated by civilians and police alike. In another parts of the world most of us suffer, some worse than others.

There are enough of us world wide who are suffering as the Muslims of Makkah did—sometimes worse—but the question remains, where can we go that’s better? And where are the Ansar to help us?