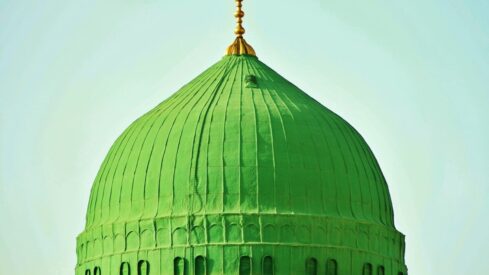 Muslim scholars have discussed different ways to consider the Prophetic claim of Prophet Muhammad (peace and blessings be upon him). This subject is known as Dala’il an-Nubuwwah (proofs of the prophethood). There are hundreds of scholars who wrote in the past and continue writing on this subject. Entire books and volumes have been devoted to this subject.

There are some who have mentioned his miracles and especially the miracle of the Qur’an as proofs of his prophethood. Some others have mentioned the prophecies of previous prophets about his coming as mentioned in the Bible, both in the Old Testament and the New Testament. Some have also mentioned prophecies in other ancient religious literatures of Hindus, Buddhists and Zoroastrians. Some have based the proofs on the Prophet’s own character, teachings and his achievements. This is indeed a vast subject and can be discussed in many different ways. It is important to know the proofs of his prophethood. Through this knowledge one can distinguish the true prophet from those who make false claims. It can also help us to explain the message of Islam to others.

Imam al-Bukhari and many other scholars of Hadith mentioned a very interesting historical report. From this report we learn how a reasonable leader approached this subject. It is mentioned that after the Treaty of Hudaibiyah, the Prophet (peace and blessings be upon him) sent many letters to the neighboring chiefs and rulers inviting them to Islam. He sent Dihyah al-Kalbi (may Allah be pleased with him) with a letter addressed to the Eastern Roman Emperor Heraclius. He ruled a vast territory of the Middle East at that time. This letter was probably sent to him in the year 628 C.E. Heraclius was in Jerusalem at that time celebrating his victory over the Persians. The letter was given to the governor of Busra, who delivered it to the Emperor. The Emperor was intrigued by this noble letter. He wanted to know more about the one who sent him this letter and whether he was truly Allah’s Messenger.

There was a caravan of Arab traders in the city. Heraclius ordered the caravan people to be brought to his court. Abu Sufian ibn Harb was the chief of this caravan. He was not a Muslim at that time. Actually, he was then one of the enemies of Islam. Later when he became Muslim he reported this whole incident to Abdullah ibnAbbas (may Allah be pleased with both of them).

Ibn `Abbas (may Allah be pleased with him) said: Abu Sufian ibn Harb informed me that Heraclius sent a messenger to him while he was accompanying a caravan from the Quraish. They were merchants doing business in the Levant (Syria, Palestine, Lebanon and Jordan), at the time when Allah’s Messenger had a truce with Abu Sufian and the unbelievers of the Quraish. So Abu Sufian and his companions went to Heraclius at Ilya’ (Jerusalem). Heraclius called them in the court and he had all the senior Roman dignitaries around him.

He called for his translator who, translating Heraclius’ question, said to them, “Who amongst you is closely related to that man who claims to be a Prophet?”

Abu Sufian replied, “I am the nearest relative to him (among the group).”

Heraclius said, “Bring him close to me and make his companions stand behind him.”

Abu Sufian added [to Ibn `Abbas], “Heraclius told his translator to tell my companions that he wanted to put some questions to me regarding that man (the Prophet) and that if I told a lie they (my companions) should contradict me. By Allah, had I not been afraid of my companions labeling me a liar, I would have lied against him (the Prophet).”

Heraclius: What is his family status among you?

Abu Sufian: He belongs to a noble family among us.

H.: Has anyone else among you before him ever claimed the same (i.e., to be a Prophet)?

H.: Was anyone among his ancestors a king?

H.: Are the strong and powerful following him or the weak and poor?

A.S.: It is the weak and poor that are following him.

H.: Are his followers increasing or decreasing (day by day)?

A.S.: They are increasing.

H.: Does anyone among those who embrace his religion become displeased and leave the religion afterwards?

H.: Have you ever accused him of telling lies before his claim (to be a Prophet)?

H.: Does he ever betray or is he treacherous in his agreements?

A.S.: No, we are at truce with him but we do not know what he will do in it. (Abu Sufian said [to Ibn `Abbas], “I could not find an opportunity to say anything against him except that word.”)

H.: Have you ever had a fight with him?

H.: What was the outcome of your battles with him?

A.S.: He tells us to worship Allah alone and not to worship anything along with Him, and to renounce all that our ancestors had said. He orders us to pray, to speak the truth, to be chaste and to keep good relations with our kith and kin.

Heraclius said to his translator to convey to him,

[1.] I asked you about his family and your reply was that he belongs to a noble family among you. In fact, all the Messengers come from noble families among their respective peoples.

[2.] I questioned you whether anyone else among you claimed such a thing, and your reply was no. If you had said yes, I would have thought that this person is copying the previous person’s saying.

[3.] I asked you whether anyone of his ancestors was a king. Your reply was no. If you had said yes, I would have thought that the man wants to take back his ancestral kingdom.

[4.] I further asked you whether he was ever accused of telling lies before he said what he said, and your reply was no. So I wonder how a person who does not tell a lie about others could ever tell a lie about Allah.

[5.] I then asked you whether the rich people follow him or the poor. You replied that it was the poor who followed him. In fact, the poor are always the followers of the Messengers.

[6.] I asked you whether his followers are increasing or decreasing. You replied that they were increasing. In fact, this is the way of true faith, till it is complete in all respects.

[7.] I asked you whether there was anyone who, after accepting his religion, became displeased with and abandoned his religion. Your reply was no. In fact, this is the sign of true faith, when its delight penetrates the depths of the hearts.

[8.] I asked you whether he had ever betrayed and your reply was no. Likewise, the Messengers never betray.

[9.] I asked you what he ordered you to do, and your reply was he ordered you to worship Allah, and not to worship anything along with Him and forbade you to worship idols and ordered you to pray, to speak the truth and to be chaste. If what you have said is true, he will very soon occupy this place underneath my feet now. I knew from the scriptures that he was going to come but I did not know that he would be from you. If I could reach him I would go immediately to meet him and if I were with him, I would certainly wash his feet.

Heraclius then asked for the letter addressed by Allah’s Messenger to him. The letter was delivered by Dihya to the governor of Busra, who forwarded it to Heraclius. The letter said: “In the Name of Allah, Most Gracious, Most Merciful. This letter is from Muhammad, the Servant of Allah and His Messenger to Heraclius the ruler of Byzantines. Peace be upon him who follows the right path. I invite you with the call of Islam. Accept Islam and you will find peace. Allah will double your reward. But if you turn away then you will have upon you the sin of Arisiyyin (his subjects). ( O People of the Book! come to common terms as between us and you: That we worship none but Allah; that we associate no partners with him; that we erect not, from among ourselves, Lords and patrons other than Allah.” If then they turn back, say ye: “Bear witness that we (at least) are Muslims (bowing to Allah’s Will). ) (Aal `Imran 3: 64)”

Abu Sufian said [to Ibn `Abbas], “When Heraclius finished his speech and read the letter, there arose commotion and many voices in the court, so we were asked to leave.” (Reported by al-Bukhari)

It is possible that Heraclius accepted Islam secretly, but he was unable to declare it because he feared rebellion of his people. However, it is interesting that he tried to consider the Prophetic claim by considering:

Considering all these aspects of his life, he became convinced that Prophet Muhammad (peace and blessings be upon him) was indeed the Messenger of Allah.