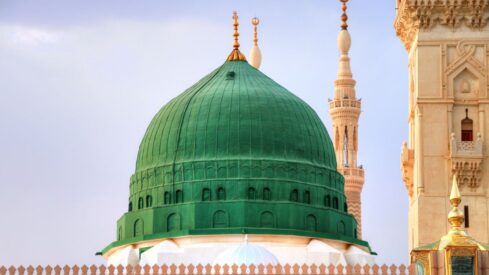 God, the Most Wise, has always chosen Prophets with the best of characters, morals and spirits. It appears that the one who has the quality of a Prophet, is undoubtedly granted the wisdom to be a superb counselor. Such is the typical character of a Prophet.

Prophet Muhammad was among the great Prophets granted such gift. God bestowed on him the best of characters, one of which was his exceptional counseling excellence which was manifested in his life and teachings.

Despite enormous persecution that Muslims faced, the Prophet did not cease to be their best comforter and counselor. It was such characteristic that caused the ruthless Arabs to transform to the best of humans and attach themselves to him like magnets. There was not a time when they needed advise, and he would ignore them or shun them. (Prophet Muhammad Master of Tolerance)

Numerous other examples indicate his wise counseling methods. In one incident, a young man came to him and asked if he could make fornication lawful. The Prophet, after listening attentively, asked some simple questions:

Would you like someone to do that to your mother?

The boy replied in the negative.

Would you like someone to do that to your sister?

Again, he replied in the negative.

Would you like someone to do that to your Aunt?

No. The Prophet then placed his hand on the man’s chest and made du’aa that Allah help him to remain chaste. (Ahmad)

He had used much kindness in responding while making the issue personal so the man could feel the gravity of his intention. With his kind methodology, the Prophet explained that in Islam, we do not perform such acts and when feeling the urge, one must turn to God with du’aa to make it easy for him to stay away from sin.

Also, he was more than just a preacher. As the ultimate counselor, he would often respond to the inquirers by individualizing them and make the questioner feel important and worthy. He would try to help replace the low feelings within the hearts with a seed of faith that would not only deal with small problems they would have but would enable them, on a long run, to handle bigger issues through stronger faith in God.

One should take notice that the Prophet, while counseling with others, did not point fingers and preach halal and haram. He would instill faith in the hearts so that the halal and haram are readily accepted. This is an example of an effective counselor.

Before he became a Prophet, he managed to use his great wisdom to solve a potentially deadly problem for his tribe.

The Kabah had to be rebuilt after a flood and the Prophet helped with the reconstruction. When it was time to place the Black Stone, (al Hajar al Aswad) on the eastern wall of the Kabah, arguments erupted about who would have the honor of putting the Black Stone in its place. Upon seeing that a fight was about to break out over the issue, Abu Umayyah, Makkah’s oldest man, suggested that the first man to enter the gate of the mosque the following morning would decide the matter. That man was Muhammad who was held by the Makkans as the trustworthy one (Al-Amin),” they shouted in joy: “This is Muhammad”. He came to them and they asked him to decide on the matter. He agreed.

He proposed putting the Black Stone on a cloak; the elders of each of the clans held on to one edge of the cloak and carried the stone to its place. They all agreed. The Prophet then picked up the stone and placed it on the wall of the Kabah. Everyone was satisfied.

Transformation of the Arabian Peninsula

Over the 23 years of Revelation, the Arabian Peninsula witnessed a full transformation of some of most ill-character Arabs into superb human beings who would easily sacrifice their own lives to save another and for the cause of their leader, Muhammad. Would this have been possible if he merely preached the revelation he received? Was his character and method of communication the driving force for the success of his mission?

The Prophet could not be a great counselor/teacher without being a student himself. God taught him, and he, in turn, taught others. His learning was not a mere learning a topic. He embodied what was taught to him by his Creator until it became a part of his being. Then he taught them to others and captivated their souls with the beauty of the message. His greatest tool was the Quran, which he used to heal their ailing souls. The Prophet was able to establish laws in the hearts and souls of people and constructed a new social order. (*)

He could certainly not have achieved such a giant victory which affected the human population of his time till this day—nearly one sixth of the world population, without possessing a good character. Thus one would be certain that a counselor must first have an exemplary character.

Additionally, one must use a gradual approach in order to make a long term change in the heart of the ailing souls. Again, we notice that the Supreme Teacher used this method to strengthen the heart of His Prophet, who in turn, did the same with his followers.

{And those who disbelieve say, “why is not the Quran revealed to him all at once?” Thus [it is sent down in parts], that We may strengthen your heart thereby. And we have revealed it to you gradually, in stages [over 23 years]. And no example of similitude do they bring to [oppose or to find fault in you in this Quran], but We revealed to you the truth [against that similitude or example], and the better explanation thereof.} (Al-Furqan 25: 32-33)

The examples of his wise dealing with people are numerous. One would only be awed as to how he dealt with some of the situations where ordinary people would have acted quite differently.

A Bedouin once entered the mosque and started to urinate in it. Mosques at that time had no walls and carpeted floors, and the ceilings were palm leaves held up by palm stems. The people ran to (prevent and restrain) him. Prophet Muhammad said:

Do not interrupt his urination (i.e. let him finish).

Then the Prophet asked for a pitcher of water to be poured over the place of urine and then explained very kindly that the mosques are places of worship and must be kept clean. (Al-Bukhari and Muslim)

The best counseling manual for a true seeker is the Quran. If one embodies what is in it, he/she is victorious. In fact when Aisha, the wife of Prophet Muhammad, was asked about the character of the Prophet, she said:

One may say, since he was the last Prophet and messenger to mankind, no other can ever be quite like him. This is true because none shall ever have to shoulder a fraction of the responsibilities he had to bear. However, as his followers we have the easy part which is to seek and adopt his gentle qualities and high moral standards into daily practice; for the Prophet’s life was divinely chosen to function as a practical manual of how one should better themselves.

Prophet Muhammad’s character and qualities are not only for the Muslims to follow, but the sincere seekers who learn about him, praise his noble character and wish to follow it.

Throughout centuries, scholars tried to follow his examples and teach others likewise.

According to a member of an Islamic community, a visiting Sheikh would spend a lot of time answering each person’s question after his speech until the person was fully satisfied. Upon being asked the reason for this method, he responded: “this part – the one-on-one time – was one of the most important parts of bringing people closer to Islam, because Prophet Muhammad was not just a preacher; he was a counselor as well.”

Read more in this series: "Inspired by the Prophet's Wisdom"