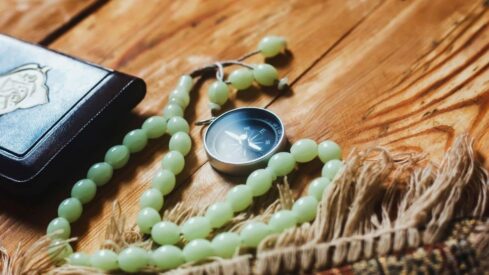 The symbolism of the Ka`bah as the exclusive and permanent direction for Muslims in Salah was extremely important. Physical expression of feelings and emotions is a natural human tendency, because man has a material as well as a spiritual aspect besides his nature. Emotions and feelings are only fulfilled when expressed physically or tangibly; releasing one’s happiness and satisfaction. This action brings about balance and harmony between the outer and inner aspects of the human soul, and provides a means of fulfilling man’s desire to know what lies behind the apparent symbol and the outward physical form.

All Islamic religious rituals are based on this natural basis as mere intention expressed privately and abstract spiritual meditation are not enough to satisfy the requirements of religious worship. In this way, every movement and bodily action will have a religious significance attached to it bringing soul and body into full harmony. In those religious communities where this innate human craving for symbolism and physical expression and representation of religious devotion is misunderstood or abused, people have gone astray.

Idolatry and the worship of inanimate objects such as stones, trees, planets and stars, as well as animals and birds can be traced to such abuse and misunderstanding. Islam presents a unique straightforward concept of the nature of Allah Almighty Who is not anthropomorphic and Whose Attributes cannot be defined or represented in physical form.

Nevertheless, physical means or symbols, such as the qiblah, that point man’s senses, heart, soul and body towards Allah, are important. Allah cannot be restricted by the confines of space, but man needs the dimension of space to direct and concentrate his devotion and feelings towards Allah. Hence, the important need for the qiblah arises. Once that principle was understood, it was necessary for the new direction in Salah, qiblah, to be unique and exclusive to Islam in order to underline Islam’s distinction and eminence.

A corollary of this principle says that Muslims are specifically forbidden to emulate or adopt other, non-Muslim, religious and cultural customs. However, it would be wrong to put this down to bigotry or prejudice on the part of Islam, since outward religious and social behaviour is a reflection of the inner beliefs and ideals that motivate and determine behaviour and outlook. These beliefs and ideals are the main factors that distinguish between different nations, outlooks, ethical systems, moral values and ways of life.  Abu Hurayrah narrated that the Prophet (peace and blessings be upon him) said: “The Jews and the Christians do not dye their hair. So, adopt a different line.” (Al-Bukhari and Muslim)

He was also reported to have told a group of his Companions who stood up to greet him: “Do not be like other communities who stand up in reverence to one another.” (Abu Dawud and Ibn Majah)

He also said: “Do not revere me in the same way the Christians revered Jesus, son of Mary. I am a mere servant of Allah. So, refer to me as Allah’s Servant and Messenger.” (Al-Bukhari)

Prophet Muhammad (peace and blessings be upon him) strongly advised his followers against imitating non-Muslims in appearance, dress, manners, etiquette and behaviour; as behind all these outward aspects lie the emotions and conviction that shape man’s outlook, character and way of life.

More importantly, the Prophet (peace and blessings be upon him) strongly rules out the adoption of ideas and concepts not emanating from, or reconcilable with, the world order Allah has commissioned the Muslim community to promote and establish. The Prophet warns against defeatism and feelings of inferiority among the Muslims who, being selected to lead mankind, should derive their values, traditions and the basis of faith from the original source of their religion; Allah Almighty.

The Muslim Community Among Others

The Qur’an describes the Muslim community variously as the leading community, a consummately upright nation and a paradigm of moderation. This special acclaim is only conferred upon them only because they draw their philosophy, outlook, traditions and way of life from Allah’s revelation.

It is not out of religious bigotry and intolerance that Islam presents itself to the world as a universal and most complete way of life. Islam sees itself as a unifying force in the world, because it advocates unity of all mankind under one God-given social, political and economic way of life. It offers equality to all and does not recognize or advance the interests of one group at the expense of others.

Today, Muslims are called to understand the significance of having their own exclusive qiblah. It is not merely a direction to which they turn in their Salah, nor is it an empty symbol. It is a feature that distinguishes Islam’s aims, concerns, identity and its whole outlook on life.

Muslims today, more than any other time in their history, need to assert their identity. They need to set themselves apart in the world which is suffering under the tyranny of false religions, oppressive and arrogant ideologies, flawed political and economic systems and heedless leadership. They have to offer new and effective remedies to save mankind and fulfil Allah’s will, so that the world will acknowledge their community as the central and righteous nation commissioned by Allah to carry His Message to all mankind.

Islam is a complete way of life through which Muslims become fit to inherit Allah’s trust and the leadership of mankind and to stand witness before Him for all humanity. However, it is only when they adhere faithfully to Islam that they take on their distinctive and unique features and qualities without which they lose their way, and their influence and status in the world diminish and evaporate.

This article has been taken with modifications from the author’s book In The Shade of The Qur’an.