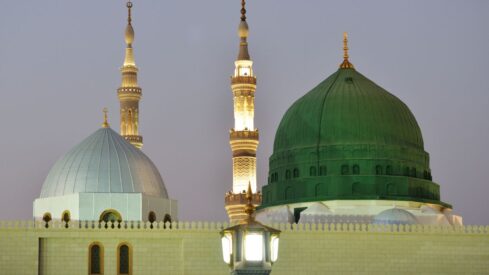 Very rarely we hear positive stories of inter-religious affairs in the news nowadays. It is becoming a cultural trend that conflict and controversy drive the propaganda for the media, fuelled by politicized “religions,” and even more so between the religions of the people of the Book and Islam.

Very rare is the positive coverage between the Judeo-Christian faiths and the Islamic faith, but unbeknown to many, the relationships between them date way back, even before the coming of Islam.

Upon the first revelation of the Quran in Mount Hira’, Prophet Muhammad (peace be upon him) rushed back home to his wife, Khadijah bint Khuwaylid. She assured him that whatever it is he was hearing was indeed a true revelation from God. Although she had yet to understand what the revelation meant, she wrapped her husband in a blanket and consoled him from his fears.

Once they had both calmed down, Khadijah urged the Prophet to consult her cousin, Waraqah ibn Naufal, a wise elderly Christian believer. Waraqah then relayed that this was the beginning of the birth of Islam and that Prophet Muhammad had a turbulent journey ahead. Unfortunately, Waraqah passed away a little later but his words held throughout the embodiment of Islam.

It was through this act alone, that Muslims were to “rely” on Christian consult and protection while the revelations reeled in. Throughout Islamic history, Muslims turned to their Christian comrades, who were rarely hesitant towards them when it came to providing shelter and help, and in turn, Prophet Muhammad always treated them with kindness and respect, knowing the lineage of both faiths grossly intertwined through their scriptures.

In the first emigration of fleeing the pagan Quraysh oppression, Prophet Muhammad received directive for the Muslims to migrate to Abyssinia, a country under the peaceful rule of a devout Christian King. The Christian King, Negus, welcomed the Muslim envoy peacefully, even when two of the Quraysh came to sabotage their good relations. It was through the narrations of chapter Maryam that the Muslims were saved by the King Negus and good relations between Muslims and Christians were sealed, by Ja’far ibn Abi Talib, the Prophet’s cousin and one of the leaders of the emigration.

Even with the discrepancy in belief of the status of Jesus (peace be upon him), Negus turned the Quraysh back towards Makkah with their gifts that they were to exchange for the Muslims who had fled their land. The King decided immediately that he wouldn’t swap a single Muslim for any of the Quraysh’s presents, and that they – the believing Muslims – were allowed to live and practice their faith in Abyssinia as long as they wished.

The Prophet’s Kindness to Jews and Christians

Besides the Christians, the Jews are also considered Ahlul-Kitab, which literally means the “People of the Book.” Those who follow the scriptures of the Torah (the Jews) and the Gospel (Christians) fall into this family, and had always enjoyed good relations with Prophet Muhammad and the first generations of Muslims.

In the Quran God says:

{O people of the Scripture! You have naught (of guidance) till you observe the Torah and Gospel and that which was revealed unto you from your Lord. That which is revealed unto (Muhammad) from thy Lord is certain to increase the contumacy and disbelief of many of them. But grieve not for the disbelieving folk.} (Al Ma’idah 5: 68)

As Islam began to grow and spread throughout Arabia, Prophet Muhammad met with many Christian communities and Jewish Tribes to spread Islam, but never outwardly converted them. He did, however, encourage them to continue to follow their Scriptures and not to compromise their faiths. He also reminded his Muslim followers:

“He who wrongs a Jew or a Christian will have myself as his accuser on the Day of Judgment.” (Al-Bukhari)

In his plight to create a peaceful spread of Islam, Prophet Muhammad had his followers enact a document to regulate the relationship between people of the Book around Madinah, where Islam was a growing civilization.  According to the sources, this is what the document said:

“Whoever joins the signatories of this scripture would be entitled to our help and would not be subject to any injustice, nor should the Muslims cooperate against them. The children of Ouf (a Jewish tribe) are community of believers. The people of the scriptures are allowed to follow their religion as much as the Muslims are allowed to follow theirs, and so are their allies except the one who commits injustice or sin, for he does not harm but himself… The signatories of the document are entitled to mutual advice, sincerity and assistance rather than fighting each other…” (503)

This document was the first in history establishing religious pluralism and freedom of beliefs. Peace was enacted as long as everyone celebrated the goodness of their religions and did not impose their beliefs on others. It was also known that Prophet Muhammad never ridiculed other religions and his spreading of the messages of Islam was always imbued in kindness through his speech and actions.

Even when Islam was insulted, the Prophet would peruse wisdom and dignity when explaining their misconceptions. Even so, he would only speak when he was directed to do so:

Prophet Muhammad though, openly encouraged the people of the Book to reinstate monotheism, something that was and is quickly being lost: {Say: ‘O People of the Scripture. Come to an agreement between us and you: that we shall worship none but Allah, and that we shall ascribe no partners unto Him, and that none of us shall take others for lords beside Allah. And if they turn away, then say: Bear witness that we are they who have surrendered (unto Him)’.} (Al-Imran 3: 64)

There are always more similarities between the people of the Book than differences, and this is something that we need to remember when reading contemporary news in the mainstream media nowadays.

His Respect for Non-Muslims in War

When it comes to the command to engage in battle, Muslims are not allowed to fight unless in self-defense or to drive out oppression. Even so, there is a comprehensive directive of the rules of war, and no Muslim is allowed to harm a non-Muslim who is unarmed, one who is working in the fields or those who take refuge in Mosques, Churches, Synagogues and Temples. This shows the continuous respect for non-Muslims, even during war.

In the unfortunate Battle of Khaybar which took place in Madinah, a Jewish tribe, Banu Nadir, had worked together with the Quraysh to instigate animosity between the Jews and Muslims who were living peacefully in Madinah. The Muslims were commanded to fight and victory fell into their hands. They also captured the daughter of the leader of the tribe, Safiyyah bint Huyayy.

“Your father remained the staunchest Jewish enemy to me until Allah The Almighty killed him. O Safiyyah, if you choose Islam, I will keep you as my wife; if you choose Judaism, I may release you and let you join your people.” (Muslim)

The options Prophet Muhammad gave Safiyyah were both kind and sensitive to her situation and did not cause any more hardship upon her, after she had just lost her father. But Safiyyah had already chosen Islam in her heart, long before the battle. This was the religion she had been waiting for to complete her own faith. She married the Prophet Muhammad.

Unfortunately, Safiyyah did face hardship amidst her new family as an “outsider” and she was frequently known as the “Jewish wife.” When she poured her heartache to the Prophet, he told her:

“You should tell them, ‘How could you be better than me when my husband is Muhammad, my father is Aaron and my uncle is Moses?” (At-Tirmidhi)

This narration single-handedly reminds Muslims of how the lineage between Islam and Judaism traces back to the time of the Prophets of past and even carries blood relations. Safiyyah always kept good kinship with the Jews even when she acknowledged Islam as the true religion, and this was affirmed by her husband that what she was doing was right.

Mainstream media dictates controversy and animosity between religions, particularly between Islam and People of the Book. Unfortunately, many people are swayed by it, naively unknowing that most of the problems are instigated by political propaganda or non-practicing or misinformed individuals. It takes time to read up on the history of interfaith relations, especially during the time of Prophet Muhammad, but it is worth it because he is the best example of how to peruse relations with others. Not everything always ran smoothly and there were turbulent phases of disagreement (like the Battle of Khaybar), but God gave a comprehensive list of directives on how the Prophet was to deal with each unique situation.

It pays to understand this because many are often misled by those who cause dehiscence within a very fragile society, but the underlying reminders often relay the kindness of Prophet Muhammad upon the Ahlul Kitab (the People of the Book) those who Muslims honor as people who were given revelations by God Himself: the Christians and the Jews.