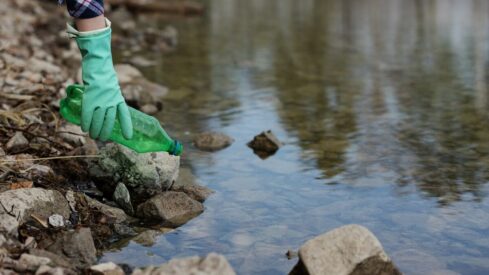 The idea of the Prophet Muhammad (peace and blessings be upon him) as a pioneer of environmentalism will initially strike many as strange. Indeed, the term “environment” and related concepts like “ecology”, “environmental awareness” and “sustainability”, are modern-day inventions, terms that were formulated in the face of growing concerns about the contemporary state of the natural world around us.

However, a closer look at the Prophet’s life reveals that he was a staunch advocate of environmental protection. One could say he was an “environmentalist avant la lettre”, a pioneer in the domain of conservation, sustainable development and resource management, one who constantly sought to maintain a harmonious balance between man and nature. From all accounts of his life and deeds, we read that the Prophet had a profound respect for fauna and flora, as well as an almost visceral connection to the four elements, earth, water, fire and air.

He was a strong proponent of the sustainable use and cultivation of land and water, proper treatment of animals, plants and birds, and the equal rights of users. In this context the modernity of the Prophet’s view of the environment and the concepts he introduced to his followers is particularly striking; certain passages of the Hadith could easily be mistaken for discussions about contemporary environmental issues.

The Prophet’s environmental philosophy is first of all holistic: it assumes a fundamental link and interdependency between all natural elements and bases its teachings on the premise that if man abuses or exhausts one element, the natural world as a whole will suffer the direct consequences. This belief is nowhere formulated in one concise phrase; it is rather an underlying principle that forms the foundation of all the Prophet’s actions and words, a life philosophy that defined him as a person.

The Prophet’s environmental philosophy is holistic

The three most important principles of the Prophet’s philosophy of nature are based on the Qur’anic teachings and the concepts of tawheed (unity), khalifa (stewardship) and amana (trust).

Tawheed, the oneness of God, is a cornerstone of the Islamic faith. It recognises the fact that there is one absolute Creator and that man is responsible to Him for all his actions. The Qur’an says what means: (To God belongs all that is in the heavens and in the earth, for God encompasses everything.) [4:126]

The Prophet considered all of God’s creations to be equal before God and he believed animals, but also land, forests and watercourses should have rights. Therefore abusing one of His creations, whether it is a living being or a natural resource, is a sin.

The concepts of khalifa, stewardship, and amana, trust, emerge from the principle of tawheed. The Qur’an explains that mankind holds a privileged position among God’s creations on earth: he is chosen as khalifa, “vicegerent” and carries the responsibility of caring for God’s earthly creations. Each individual is given this task and privilege in the form of God’s trust. But the Qur’an repeatedly warns believers against arrogance: they are no better than other creatures: (Surely the creation of the heavens and the earth is greater than the creation of man; but most people know not.) [40:57]

The Prophet incited believers to share the earth’s resources

The Prophet believed that the universe and the creations in it – animals, plants, water, and land – were not created for mankind. Man is allowed to use the resources but he can never own them. Thus while Islam allows land ownership, it has limitations: an owner can, for example, only own land if he uses it; once he ceases to use it, he has to part with his possession.

The Prophet recognised man’s responsibility to God but always maintained humility. Thus he said: “When doomsday comes, if someone has a palm shoot in his hand, he should plant it,” suggesting that even when all hope is lost for mankind, one should sustain nature’s growth. He believed that nature remains a good in itself, even if man does not benefit from it.

Similarly, the Prophet incited believers to share the earth’s resources. He said: “Muslims share alike in three things – water, herbage and fire,” and he considered it a sin to withhold water from the thirsty.

The Prophet’s attitude towards the sustainable use of land, conservation of water and the treatment of animals is a further illustration of the humility of his environmental philosophy.

The Prophet believed that Earth had rights, just as the trees and wildlife living on it

Sustainable Use of Land

“The earth has been created for me as a mosque and as a means of purification.” [Al-Bukhari I:331] With these words the Prophet emphasises the sacred nature of earth or soil, not only as a pure entity but also as a purifying agent. This reverence towards soil is also demonstrated in the ritual of tayammum, or “dry wudu’” which permits the use of dust in the performance of ritual purification before prayer when water is not available.

The Prophet saw earth as subservient to man, but recognised that it should not be overexploited or abused, and that it had rights, just as the trees and wildlife living on it. In order to protect land, forests and wildlife, the Prophet created inviolable zones known as hima and haram, in which resources were to be left untouched. Both are still in use today: haram areas are often drawn up around wells and water sources to protect the groundwater table from over-pumping. Hima applies particularly to wildlife and forestry and usually designates an area of land where grazing and woodcutting are restricted, or where certain animal species are protected.

The Prophet not only encouraged the sustainable use of fertile lands, he also told his followers of the benefits of making unused land productive: planting a tree, sowing a seed and irrigating dry land were all regarded as charitable deeds. Thus any person who irrigates a plot of “dead”, or desert land becomes its rightful owner.

In the harsh desert environment where the Prophet lived, water was synonymous to life. Water was a gift from God, the source of all life on earth as is testified in the Qur’an:  (We made from water every living thing) [21:30]

The Qur’an constantly reminds believers that they are but the guardians of God’s creation on earth and that they should never take this creation for granted: (Consider the water which you drink. Was it you that brought it down from the rain cloud or We? If We had pleased, We could make it bitter.) [56:68-70]

Saving water and safeguarding its purity were two important issues for the Prophet: we have seen that his concern about the sustainable use of water led to the creation of haram zones in the vicinity of water sources. But even when water was abundant, he advocated thriftiness: thus he recommended that believers perform wudu’ no more than three times, even if they were near to a flowing spring or river. The Prophet also warned against water pollution by forbidding urination in stagnant water.

The Treatment of Animals

The Prophet once said, “If anyone wrongfully kills even a sparrow, let alone anything greater, he will face God’s interrogation” [Mishkat al-Masabih]. These words reflect the great reverence, respect and love that the Prophet (peace and blessings be upon him) always showed towards animals. He believed that as part of God’s creation, animals should be treated with dignity and the Hadith contains a large collection of traditions, admonitions and stories about his relationship to animals. It shows that he had particular consideration for horses and camels: to him they were valiant companions during journey and battle, and he found great solace and wisdom in their presence.

Even in the slaughter of animals, the Prophet showed great gentleness and sensitivity. While he did not practice vegetarianism, the Hadiths clearly show that the Prophet was extremely sensitive to the suffering of animals, almost as though he shared their pain viscerally. Thus he recommends using sharp knives and a good method so that the animal can die a quick death with as little pain as possible. He also warned against slaughtering an animal in the presence of other animals, or letting the animal witness the sharpening of blades: to him that was equal to “slaughtering the animal twice” and he emphatically condemned such practices as “abominable”.

It is impossible to do justice to the full scope and significance of Prophet Muhammad’s environmental philosophy in this short article. His holistic view of nature and his understanding of man’s place within the natural world pioneered environmental awareness within the Muslim community.

Sadly, the harmony that the Prophet (peace and blessings be upon him) advocated between man and his environment has today all too often been lost. As we face the effects of pollution and overexploitation, desertification and water scarcity in some parts of the world and floods and violent storms elsewhere, it is perhaps time for the world community as a whole, Muslims, Christians and Jews, Hindus and Buddhists, atheists and agnostics, to take a leaf out of the Prophet’s book and address the current environmental crisis seriously and wisely.