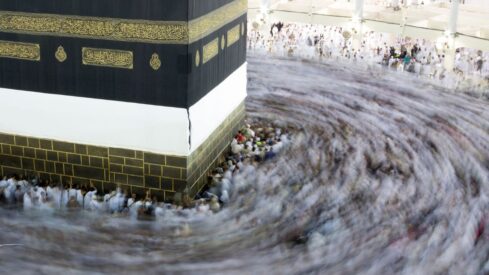 Ar-Ramal is the ritual where male pilgrims are required to walk briskly with their chests thrust forward and with their shoulders rolling slightly during the first three circuits of Tawaf ul-Qudum (Arrival Tawaf). Ladies are not required to practice Ramal.

Ar-Ramal was prescribed for Muslims as when they carry out this ritual they look like a wide ocean or a huge army; the matter which makes Muslims appear very strong in the eyes of their enemies. Really, this scene is enough to frighten the enemies of Islam and to persuade them shun their harm and evil intended for Muslims. Also, may this great scene soften and penetrate the hearts of those infidels and polytheists and make them surrender to Allah’s Will and thus find nothing better than embracing His True Religion, Islam.