Belief in the Unseen Does Not Justify Defeatism 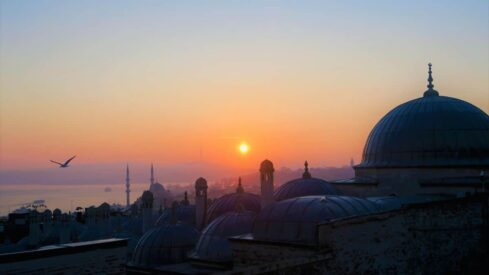 Among the worst maladies that befall nations is that when a nation fails to face its reality, it flees from it to another; it flees to a remote history to tickle its feelings through its victories, or to an unseen, glorious future. In both cases, either fleeing to the past or to the future, it avoids, consciously or unconsciously, facing its bitter reality and failure. This, indeed, is the worst malady that can befall the Ummah. The victories of the past are of no use if they do not infuse the present generation with an overwhelming desire to regain the lost glory and might. Similarly, there is no good in relying on the unseen and hoping for the coming victories if this hope does not turn into a power that snatches from the jaws of defeatism which we suffer.

Recently, it is noticeable that some Muslims deal improperly with the texts foretelling some signs of the Hour. They cite these texts as excuse for the painful reality of Muslims, putting, therefore, no blame on the Ummah for its setbacks. Their interpretation of the ongoing events ignores the fact that the afflictions we suffer are the bitter fruit of our own negligence; rather they argue that the Ummah’s conditions are the result of external factors, and that the Ummah is too feeble to change them. All what we can do, their argument goes, is only to wait for the coming of Al-Mahdi, the appearance of the Dajjal (antichrist) and descension of Jesus. Until this happens, Muslims need only to do their best to learn the signs of the Hour and what should be done when they appear. As for the bitter reality, it will certainly come to an end by the final and crucial war for which the Ummah has to wait.

Here I would like to highlight two important points:

First, when people encounter a setback or a difficulty in their lives, they are likely to take one of two courses of actions. They may face the problem and embark on a process of self-assessment through which they can identify their mistakes and shortcomings, and then try to amend them and change for the better. This is the message implied in the Prophet’s advice,

“Seek help from Allah and do not lose heart. If any adversity comes to you, do not say: ‘If I had only done such-and-such, it would have been such-and-such.’ But instead, say, ‘Allah has decreed (it) and what He willed, He has done,’ for verily, (the word) ‘if’ opens the way for the work of Satan.” (Muslim)

The Prophet here guides us to seek help from Allah and not to succumb to feebleness nor grieve over the past. The hadith implies that we should direct our attention to learning from our mistakes and moving on without wasting time in crying over the spilled milk. This, in fact, is the proper approach that should be taken by a wise nation. The setback should be an impetus for further struggle and endeavor, and, in this way, today’s defeat can be turned into a glorious victory tomorrow.

On the other hand, some people, when faced by bitter reality and difficult challenges, consciously or unconsciously resort to fleeing from this reality through various ways. They either identify with the glorious past, crying for its lost victories, or dream of the glowing future without taking any step towards it.

Actually, what happens to individuals can befall nations, and I believe that the Ummah is experiencing something like that. We, undoubtedly, undergo unfavorable circumstances; most the news is displeasing. This led some people to evade this reality by waiting for the future, which will bring about “magic” solutions to all the problems. They rely on some hadiths that give glad tidings of coming victories, and instead of taking them as an incentive for tireless work, they deal with them passively, taking them as miracles that need no human effort or intervention.

The second point to highlight is that our reality is not that dark or gloomy as many people think. There are still bright sides, and it is better for the Ummah to consider these bright sides as victories or at least as indications of a brighter future. Now, after the successive setbacks suffered by the Ummah, we see that the Zionist occupation is dealt painful slaps in Palestine and the occupants’ reverse-immigration is growing. This is the news that comes from the enemy itself. Now, instead of running away from our reality to daydreaming, why don’t we deal with it positively, developing our strong points and amending any shortcomings.

But how should we deal with the texts foretelling some future, unseen signs of Hour? Should we cease striving and wait for their appearance? Should we direct all our effort, as some people suggest, to find out the time of their occurrence and to determine whether the current events represent these signs or not?

In fact, we need to adopt a practical approach in dealing with these matters because among the most outstanding features of our religion is that it urges work and discourages occupying oneself with futile and useless matter. Among the great supplications reported from the Prophet (peace and blessings be upon him) is his saying “and I seek refuge with You from useless knowledge” (At-Tabarani, with good chain of transmission). The useless knowledge is that which does not result in any good for man in his religion or life.

So, Islam warns against preoccupation with futile matters. It associates knowledge with work, and theory with practice, and this is reflected in the fact that Muslims are the ones who elevated the position of experimental and practical sciences at a time when Greek thought was theory-oriented. This is the very methodology applied by Islam in dealing with the matters of the unseen, especially those connected with the signs of Hour. Following are some proofs:

1. It was reported by Al-Bukhari and Muslim that a man asked the Messenger (peace and blessings be upon him) about the Hour saying, “When is the Hour?” The Prophet did not answer his question, since this is a matter of the Unseen; however, he directed him to the more useful approach, saying “What have you prepared for it?”

Here the Prophet guided this man to what he should occupy himself with. It is as if the Prophet taught him and us to set a criterion for dealing with any matter. This criterion lies in its practicality and expected benefit.

2. The Prophet (peace and blessings be upon him) used to talk to his Companions about the Dajjal (antichrist) and his description until they committed that to memory. It happened that during the lifetime of the Prophet (peace and blessings be upon him) a lad having the same description of the Dajjal appeared. He was called Ibn Sayyad. Some of the Companions thought that this lad was the Dajjal; even `Umar swore that it was he. This assumption, of which `Umar was so certain, led him to ask permission from the Prophet to kill the lad. The Prophet answered, “If he is (really) the Dajjal, then (Allah) will not enable you to (kill) him. If not, then there is no use of killing him.”

This citation clarifies that although `Umar was sure that Ibn Sayyad was the Dajjal and he wanted to kill him, the Prophet did not allowed him to do so, giving him a simple but practical answer. If this boy was the real Dajjal, then `Umar would not be able to kill him because it is established that the Dajjal will be a sign of the Hour and some events related to him are bound to occur. Otherwise, there would be no need for killing him. So the Prophet teaches us to have a practical, rather than a theoretical, approach and to assess the usefulness of any action we intend to take.

3. The Qur’anic approach in dealing with historical events teaches us that our interest should be directed to learning lessons from history and knowing the norms and laws underlying the rise and downfall of civilizations; to studying the characteristics of people, whether righteous or wicked, without giving great importance to the trivial details like defining persons’ names or dates exactly. For example, who cares whether Pharaoh was Ramses II or anyone else? What matters, and what the Qur’an directs attention to, is to study the personality of Pharaoh as an example of a tyrannical governor who arrogantly rejected the guidance when it came to him. Such kind of people exists, and a Muslim should not be one of them.

First, have unshakeable belief in them if they are authentic.

Second, pay attention to the role a Muslim should play in the reality he lives. Otherwise, Allah will hold him accountable for his negligence.

A Muslim may happen to live in a time when the Ummah suffers painful conditions; he is not to be blamed for this. However, what he is to be blamed for is lagging behind and showing an indifferent attitude. How can any Muslim afford to stand idle while the Ummah faces these tremendous, unprecedented challenges? Is it sensible to claim that we have to wait for Jesus to rectify our situation? What would happen if he did not appear during our lifetime? What would be our excuse before Allah for letting our Ummah down? Indeed, taking such a stance would make us ultimately unqualified and unworthy of receiving Jesus and fighting under his leadership.