Between Atheism and Monotheism 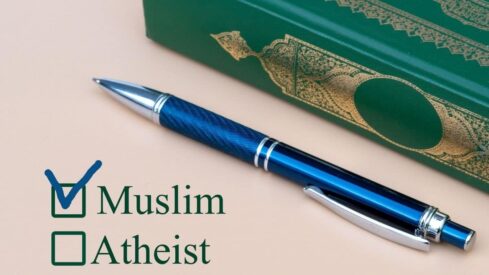 We need to explain first that there is a big difference between the concept of monotheism and the concept of atheism. If people who say that atheism is not a sin, say in the meantime that monotheism is not a sin then they are in a big discrepancy, since both concepts basically run against each other. Atheism – according to Longman Dictionary of English Language and Culture – means the disbelief in the existence of God. This is while monotheism – according to the same dictionary – refers to the belief that there is one God only.

Thus, while atheism is the denial of God, that He is not there and that nature and the world is self functioning, which makes Man the god of himself. On the other hand, monotheism is the peak of belief and the deep conviction in the existence of One true God ruling this universe and running its affairs.

Atheism – to all monotheists and even polytheists – is one if not the biggest sin ever committed simply because it represents Man’s revolt against the Power that created him, the Maker that fashioned him and the One who gives him everything. Can Man be degraded to such an extent that he leads a life with no guide? All atheists who led such a life ended up with confessing that such a life is a scenario of mere wretchedness and misery.
Here, we should raise up the question, do we need God?

The answer is yes. In reality, man cannot live without God. We need God to guide us, to help us. Even if we deny His existence for some reasons, we will find no way but to resort to Him at the time of a plight, when we run out of all helpers and supporters. We will resort to the Great Helper, the Savior and the Guide. The Qur’an reveals this fact, which may be refused by Man due to arrogance and sheer ignorance. It reads what means:

*{And when harm toucheth you upon the sea, all unto whom ye cry [for succor] fail save Him [alone], but when He bringeth you safe to land, ye turn away, for man was ever thankless.}* (Al-Israaï؟½ 17:67)

The Qur’an follows a very challenging and logical way of discourse when discussing this issue with atheists who denied the existence of God. Even in his many hadiths, the Prophet, peace and blessings be upon him, explained that the biggest and the most heinous sin is to associate some one with Allah. If this is the most heinous sin, then, more heinous than this one is to deny the existence of Allah completely.

If Man refuses God, then he refuses his own existence and declares that he is satisfied by remaining astray in the wilderness of life. To refuse God is tantamount to saying that you are not there. If God is not there, then who brought you here? Is it nature? If yes, then how come that it is subjected to us? How come that nature – the fake god – is in the service of its servants? If Man created himself, then how come that he is not perfect and how come that he dies and decays? Is god that mean and helpless creature that needs to eat and drink and answer the call of nature?

There is a big need to God, in order to control the very movement of this universe and its functioning. The existence of God, is there appearing in every corner of this globe. This fact was comprehended by a Bedouin living in the far desert of Arabia. He once said:

“The footprints would indicate that someone was stepping here, the excretion of a camel denote that a camel has passed by the place. Now, with these high skies, vast earth, is not this all sufficient to say that there is a God?”

As you can see, atheism is a totality of ignorance, a bundle of degradation and a clear act of revolt of man against his Creator, his Maker and Fashioner.

Monotheism is, on the contrary, is the clear declaration of submission and surrender. The manifesto of obedience of the One True God and the Only Governor of this universe. While monotheism is the perfect truth, atheism is regarded, by believers of monotheism, as the complete ignorance and sheer blindness. This is since they regard an atheist as being blind and cannot see the truth about himself.

There are more to be said in this issue, but not much space. So, I will jump to the other point you referred to, namely the purpose of man’s existence on earth. This is, actually, linked a great deal to your first question. Man is here to worship and show obedience to Allah, the One True God and Creator.

Man is – as declared in the Qur’an – the vicegerent of God on earth to function according to His laws and act according to His Will, to show obedience to Him and abide by His guidance in order to gain the reward allocated to those who follow the true path. Man is here in this sojourn life to be tested, whether he is going to follow the laws of God or not. If he fulfills such laws and abides by it, then he has successfully fulfilled the mission. If not then, he is lost. For the successful, there is reward and bliss in the Hereafter while losers will dwell in the Hellfire.

People are informed through prophets and messengers sent by God and Books revealed by Him, about such laws they are to abide by and the destiny of those who abide by the laws and those who revolt. Everyone has the free will to choose which way to follow and he is responsible for the destiny he chooses for himself. Man is given choice. This is in simple words the mission of man on earth. To see whether he will stick to the will of God or not.

Man chooses for himself and with his free will decides where to go. Almighty Allah says in the Qurï؟½an what means:

*{Lo! We offered the trust unto the heavens and the earth and the hills, but they shrank from bearing it and were afraid of it. And man assumed it. Lo! he hath proved a tyrant and a fool.}* (Al-Ahzab 33:72)