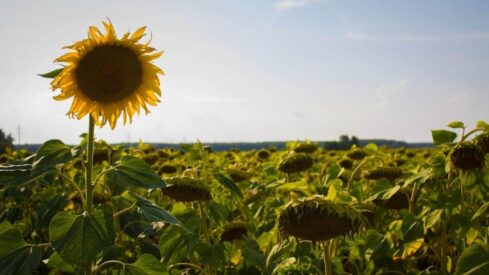 Anas (May Allah be pleased with him) reported that the Prophet (peace and blessings be upon him) said, “If the Hour (the day of Resurrection) is about to be established and one of you was holding a palm shoot, let him take advantage of even one second before the Hour is established to plant it.”

The spirit of constructive positivism and active endeavour is one of the principles stressed by Sunnah. This spirit should control the Muslim’s mind, senses, thought, and conduct. It symbolizes interest in deeds rather than verbal eloquence and rhetoric. It lays great importance on construction rather than destruction, and in lighting candles rather than cursing darkness.

This tiny shoot is a symbol of the value of activity per se. A Muslim worships Allah through his work in constructing and developing the land. He is to keep on working until his last breath.

This positive orientation is evident in elevating the mastery of one’s work to the level of obligation and worship. Encouraging Muslims to attain the highest degree of quality and perfection in their work, the Prophet (peace and blessings be upon him) told us that Allah likes one to perfect one’s work, no matter how big or small this work.

This principle appears in many hadiths that prohibit cursing and swearing. Even with regard to Satan, the open enemy to humans, we are ordered not to waste a moment in cursing him; rather, we should busy ourselves with more useful and fruitful acts such as remembering Allah and seeking His support and help. Abu Hurairah reported that the Prophet said, “Do not abuse Satan, but seek Allah’s Refuge from his evil” (Sahih al-Jami` as-Saghir).

Cursing Satan is futile. Instead, one should remember Allah the Exalted and seek His refuge from the evils of Satan. One of the most famous hadiths concerning this matter is as follows: Abu Tamimah Al-Hujaimi reported: One day as I was riding behind the Prophet on a donkey, it stumbled and I shouted, “Let Satan perish!” The Prophet said, “Do not say ‘let Satan perish,’ for if you say so he will feel important and haughty and he will say, ‘I thwarted him with my power!’ Instead say, ‘In the name of Allah,’ so that he will (feel humiliated and) be smaller than a fly” (Sahih at-Targhib wat-Tarhib).

This means that the devil becomes puffed up with pride whenever one curses him or invokes Allah against him. However, when one remembers Allah and ignores Satan, then Satan feels dwarfish and grovels. Certainly, pronouncing “in the name of Allah” is a positive act because it means that one is remembering Allah and seeking His refuge; whereas saying “let Satan perish” is a negative act, as it does not offer solutions nor achieve anything; thus Satan rejoices on hearing it.

*By Dr. Yusuf A. Al-Qaradawi

*Based on the book: The Sunnah: A Source of Civilization