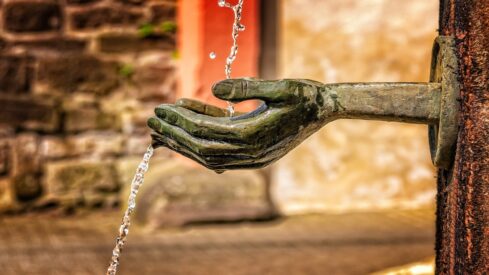 According to experts, drinking water can improve memory, help absorb nutrients and increase energy, so it is necessary to know the sufficient amount of water daily to ensure that we get these benefits, since water is the main chemical component of our body and makes up about 60% of body weight. Hence, water should be our favourite drink over sugary drinks full of calories.

The Centers for Disease Control and Prevention (CDC) reported that water helps the body maintain a normal temperature, lubricate joints, protects the spinal cord and other sensitive tissues, and sweeps away toxic waste from the body.

Other health benefits of water include reducing fatigue during the day, improving memory, nourishing the skin, improving digestion, helping absorb nutrients, removing toxins from the body, and improving blood circulation.

One-fifth of the fluids in our diet of foods

Nutritionist Juliette Kellow and dietitian Dr. Sarah Brewer said that everyone needs to drink a different amount of water, noting that everyone’s daily water requirements depend on weight, age, gender, activity level, and climate in which they live.

But a woman should drink about two litres of water each day, and two and a half litres for a man. Kello and Brewer explained that: “For most of us, about a fifth of the fluids in our diet come from foods, such as milk,”. Soup, yogurt, fruit and vegetables as research conducted by the European Food Safety Authority indicates that adequate daily consumption of water is about 2 liters for women and 5.2 liters for men and if 20% of this liquid comes from food, then women need to drink 6.1 liters and men two liters of water.

This, according to the European Food Safety Authority, “is about six to eight cups every day. Good hydration helps the body to work better over an extended period of time.

“Compared to other methods of hydration, water is incredibly effective for the simple reason that 60 percent of our bodies are water,” Chloe said, adding: “It has been shown to significantly reduce the risk of various health conditions and even certain forms of cancer, thanks to the fact that it enhances the function of our living organs as well as improving their health,” adding: “In addition, it expels harmful toxins and waste products from the body that could have been kept, which means that higher moisturizing levels are equal to removing them.” More poisons. This leads to a longer and healthier life, because living with.” Symptoms of dehydration will only have negative effects on an individual’s overall health, even if they live a healthy lifestyle and noted: “Multiple studies have confirmed that there is a correlation between optimal hydration levels and increased shelf life, which means that drinking the right amount of water for body weight each day is one of the ways in which an individual can increase their longevity in addition to their overall health.”

During a normal day, we lose about two liters of water only through breathing, sweating and other body functions, according to the physician Blanca Lizola Mayo, who explains that: “Even during sleep, we can lose more than one kilogram of water weight not only through sweating, but also through breathing, and even conditioning the air has dehydrating effects on our bodies.”

Many know the importance of drinking water and its benefits for better health, but also it should be noted that eating substantial amounts of water can lead to dilution of salt in the blood, and with the frequent drinking of water, a person may turn into a patient with a lack of sodium in the blood.

Doctors also advise against drinking too much water for kidney failure patients, and those who take certain medications that cause water retention in the body, such as NSAIDs, antidepressants or others.

To know the right amount of water, without decrease or excess, WebMD points out that the general rule is to eat 15 cups a day for men and 11 cups for women.

But we should keep in mind that this amount includes the rest of the fluids that the body gets, which gets 20% to 30% of the water through food. More other drinks such as juice, tea and milk can be obtained.

There are also important benefits of drinking adequate amounts of water in the following:

Better performance of the joints

Water forms a large part of the formation of joint cartilage that helps absorb shocks and make bone movements smoother. Drinking water reduces the severity of suffering from gout.

The body loses a lot of water when sweating, especially at relatively elevated temperatures. Without enough water, it can also lose the sodium and potassium it needs. The mouth dries out and the person feels dizzy or at least unstable due to the lack of fluid in the body.

Water helps the kidneys remove waste products from the blood. If the kidneys do not get enough water, these wastes can accumulate with acids, clogging the kidneys with proteins known as myoglobin. Dehydration can also lead to the formation of kidney stones and urinary tract infections.

Some suffer from a low level of concentration, not remembering things easily, or thinking calmly and clearly when the water level in the body is low. These problems can be avoided by drinking the right amount of water, so that it is at least 4 cups a day for a person weighing 70 kg and the amount increases with weight gain.

Lack of fluid in the body or even mild dehydration leads to a feeling of fatigue and fatigue. Therefore, it makes sense when compensating sweat during exercise with water and minerals such as sodium and potassium to hydrate the body and boost energy, giving a boost and activity to build muscle, improve the functioning of the heart and pump oxygen-laden blood to the brain, thus getting better mental fitness.

Studies have shown that people who made sure to eat 2 or 3 extra glasses of water a day had less fat, sugar, and salt in their blood, while achieving higher calorie burning rates, which ultimately meant helping to lose excess weight. Drinking water also helps to achieve a feeling of fullness which limits the intake of soft drinks or juices with high calories and sugars. Water helps improve digestion as well, as well as the space it occupies in the stomach which automatically reduces the number of meals.

Drinking enough water may not improve the functioning of the heart but not taking the right amount of water, leads to mild dehydration, affects blood vessels and weakens them with the same effect as smoking on them. Lack of water drinking also leads to a decrease in the amount of blood in the body, resulting in low blood pressure and an increase or acceleration in heart rate. It only takes 15 to 20 minutes for getting enough water to get back in order.

Some people faint from blood donation if there is a lack of fluids in the body. We should drink adequate amounts of water to avoid low blood pressure and fainting if the weather is hot, or when exercising, or when sweating and urinating frequently.

On the other hand, there are some health warnings regarding the risk of drinking plenty of water just before bedtime. So are there any harms to drinking too much water before going to bed?

Despite the importance of drinking water for the body and its great benefits both to protect against dry skin and its role in losing weight, restoring vitality and vitality, some doctors and health experts warn of the danger of drinking water just before bedtime.

Urologist Vanita Sima Chiang explained why drinking water before going to bed is harmful to health. She explained that drinking large amounts of water shortly before going to bed pushes a person to get up during the night in order to enter the bathroom to urinate, which negatively affects the hours of sleep and their quality. The doctor pointed out that it depends not only on the inconvenience of waking up, but also on its serious consequences for health.

The total number of hours you spend in bed doesn’t matter, but what matters is the amount of deep sleep you get. In other words, even if you get a full 8 hours of sleep, waking up in the middle of the night can disrupt your sleep cycle, leading to poor concentration and limited energy the next day.

A study conducted in Boston, US, on more than 5,000 people also indicated that waking up to enter the bathroom during the night is associated with an increased likelihood of developing symptoms of depression, according to the US website (MBG Health).

Lack of deep sleep can also lead to a weakening of the immune system, according to Dr. Heather Moodai, a specialist in functional medicine, “as the body rests, the cells of the immune system concentrate all efforts and energy to resist viruses and bacteria.” Moday stressed the importance of keeping the immune system in more good condition, especially considering the pandemic.

To avoid this problem, experts advise refraining from drinking water 3 or 4 hours before bedtime, except in cases of thirst.