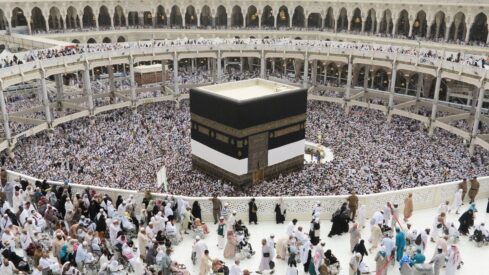 In order for the Muslim nation to reunite and continue its righteous path, it is to develop awareness of the importance and status of the Muslim sanctified places and values, call to mind the principles and ethics of Islam, and revive hearts and souls with realizing the significance of the days of Almighty Allah. Allah Almighty says:

[We verily sent Moses with Our signs, saying: Bring thy people forth from darkness unto light. And remind them of the days of Allah. Lo! therein are signs for each steadfast, thankful (heart).] (Ibrahim 14:5)

Hajj is a divine ordinance that brings to the memory of the Muslim nation the need and importance of unity, revives energy into Muslims’ hearts, and makes them yearn for spiritual uplifting.

On performing Hajj, pilgrims not only pay attention to the Sacred House of Almighty Allah, they also visit Al-Madinah Al-Munawarah and bring into mind Al-Quds (Jerusalem) and Al-Aqsa Mosque. These three places have special status in Muslims’ hearts owing to their sanctity and their having witnessed special events in the history of Islam.

The sanctified Ka`bah is the place to which Muslims turn on performing Prayer, and head for and circumambulate on making Hajj. Allah Almighty says:

[And when We made the House (at Makkah) a resort for mankind and a sanctuary, (saying): Take as your place of worship the place where Abraham stood (to pray). And We imposed a duty upon Abraham and Ishmael, (saying): Purify My house for those who circumambulate it and those who meditate therein and those who bow down and prostrate themselves (in worship).] (Al-Baqarah 2:125)

Regarding Al-Madinah Al-Munawarah, it is the place where the Muhajirun (the Muslims who migrated with the Prophet to Madinah) and the Ansar (the dwellers of Madinah who supported the Prophet) entered into a bond of brotherhood, and the land which Allah Almighty has made the final resting place of the Prophet’s body in this world.

As for Al-Quds and Al-Aqsa Mosque, the Prophet’s Night Journey and Ascension was the event that related Makkah, Al-Quds, and Sinai. This blessed journey started from Makkah, and during it the Prophet (peace and blessings be upon him) and angel Gabriel passed by Sinai, and Al-Quds was the destination. From there the Prophet (peace and blessings be upon him) ascended to the Heavens, and then returned to Makkah. That miraculous event took place only in a little part of the night. Allah Almighty says:

[Glory to (Allah) who did take his servant for a journey by night from the sacred Mosque to the farthest Mosque, whose precincts we did bless, in order that we might show him some of Our Signs: for He is the one who heareth and seeth (all things).] (Al-Israa’ 17:1)

Besides, Allah Almighty swore by Makkah, Sinai, and Al-Quds in the Qur’an. He Almighty says in this regard:

“The Fig and the Olive” [the fig referring to Damascus and the olive to Al-Quds, according to some scholars’ explanation of this verse] implies mention of Al-Quds where Prophet Jesus (peace and blessings be upon him) was born and where he called to worshiping Almighty Allah alone.

“The Mount of Sinai” refers clearly to Sinai where Almighty Allah spoke directly to Prophet Moses (peace and blessings be upon him).

“The City of Security” refers to Makkah, where Prophet Muhammad (peace and blessings be upon him) was born, sent to people to call them to Islam, and sincerely strove in Allah’s cause.

Mentioning these three places indicates, in fact, mention of the messages of monotheism whose light spread all over the world.

The Prophet (peace and blessings be upon him) also referred to the sacred places in Islam—Makkah, Madinah, and Al-Quds—together in one hadith: “Do not set out on a journey except for three mosques (the Sacred Mosque [Allah’s Sacred House], the Prophet’s Mosque, and the Mosque of Al-Aqsa.)”

These three mosques have special importance in Islam and offering Prayer in them is of multiplied rewards. They are really worthy of getting all attention and care of Muslims.

The Muslim nation needs to implant into the minds of the Muslim generations the awareness of the significance and sanctity of these sacred places. These places are, in fact, trusts in Muslims’ hands, which they must preserve and defend with all possible means. Should Muslims cede Al-Quds, this would mark the beginning of losing their honor and all other of their sanctified places.

The occasion of Hajj revives Muslims’ awareness of this matter. Sincere pilgrimage molds the Muslim pilgrims anew, uplifts their spirituality, and helps them improve their behavior. It reawakens in them loyalty to Almighty Allah and His Messenger, adherence to the teachings of Islam, and earnestness of preserving and defending their honor and the sanctity of the sacred places.

Reciting the Qur’an, this time in the places where it was revealed, pilgrims experience a new feeling and deeply contemplate the occasions and events of the revelation of its verses, especially the verse that says:

[As to those who have rejected (Allah), and would keep back (people) from the way of Allah, and from the Sacred Mosque, which We have made (open) to (all) people, equal is the dweller there and the visitor from the country and any whose purpose therein is profanity or wrongdoing them will We cause to taste of a most grievous penalty.] (Al-Hajj 22:25)

It is this new mode of spirituality that affects the life of true pilgrims and helps them keep steadfast on the right path until the Day of Judgment.