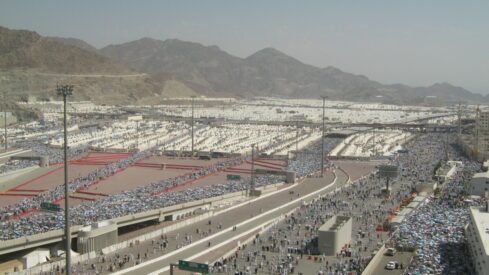 You have to spend two or three nights following the first day of `Eid in Mina. If you intend to spend just two nights in Mina, you have to leave before the Maghrib Prayer of Dhul-Hijjah 12.

Throughout the three days following the first day of `Eid you are not obliged to stay in Mina in the daytime, yet staying in Mina is the sunnah. These three days are called the Days of Tashreeq. The Prophet (peace and blessings be upon him) is reported to have said, “The Days of Tashreeq are days of eating, drinking, and remembering Allah.” It is recommended, therefore, that you repeat the Takbir of `Eid throughout these days, especially after each prayer.

2. Throwing Pebbles at the Three Jamarat

On each day of Dhul-Hajjah 11-13, you throw pebbles at the three Jamarat, starting with the small Jamarah (Al-Jamarat As-Sughra), then the middle one (Al-Jamarat Al-Wusta), and finally the big Jamarah (Al-Jamarat Al-Kubra). The time for throwing the pebbles starts from the Fajr Prayer of each day and extends to the next day’s Fajr Prayer. Some people insist that the time for throwing the pebbles starts after Zhuhr Prayer; this is the opinion of some scholars but it is a weak one. Furthermore, it poses a great difficulty on both pilgrims and Saudi authorities because of the huge number of pilgrims.

If you plan to spend only two days and nights in Mina, you throw the pebbles on Dhul-Hijjah 11 and 12 only.

Now that you are going to leave the sacred sites, you have to bid farewell to the sacred mosque and refresh your eyes with the sight of the Ka`bah before departing. This is done by performing Tawaf Al-Wada` (Farewell Tawaf), which you should do immediately before leaving Makkah. This Tawaf is performed in the same way as Tawaf Al-Ifadah; no idtiba` (exposing the right shoulder) or ramal (jogging) is involved.

You may prefer to delay Tawaf Al-Ifadah until you are about to leave Makkah. This practice is acceptable, but note that the intention of this Tawaf should be that it is Tawaf Al-Ifadah. After finishing it, you need not make another special Tawaf for leaving.