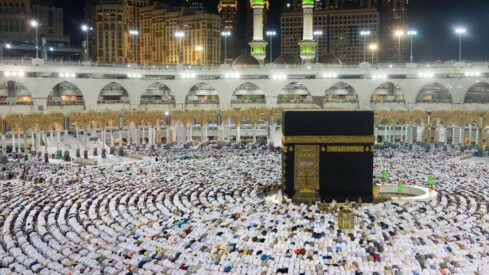 The first steps in Hajj are to put on the clothing of ihram and then to make the intention of ihram at the miqat. The intention of ihram varies according to the mode of Hajj you choose. For detailed information on ihram, its etiquettes, its exact location, time limits, and its restrictions, refer to the article “All About Ihram.”

What to do after that depends too on the mode of Hajj as follows:

Having made the intention of `Umrah, you should make a full `Umrah. After finishing it, you automatically go out of the state of ihram. The restrictions of ihram no longer apply to you until you go into the state of ihram once again on Dhul-Hijjah 8, this time for making Hajj.

Having arrived at Makkah, you make the Tawaf of arrival, which is recommended, not obligatory. It is performed in the same way the Tawaf of `Umrah is performed. (For more details on how to perform Tawaf, you can review the article “How to Make `Umrah.”)

You remain in the state of ihram until you are done with the major rituals of the `Eid day, Dhul-Hijjah 10. It is recommended to repeat Talbiyah from time to time until you cast the pebbles of Al-`Aqabah on the day of `Eid.

Generally speaking, pilgrims who perform Qiran perform the same rituals of ifrad with one exception, they have to offer hadi (animal slaughtered in Makkah as a gift for its poor people.)

If you are performing tamattu` Hajj, put on your ihram clothing again and make the intention of Hajj saying “Labbayka Allahuma Hajjan” (O Allah, I answer Your call by performing Hajj.) Now you are ready to undertake the rituals of Hajj. Pilgrims who perform ifrad or qiran Hajj are already in the state of ihram so they skip this step.

On the morning of Dhul-Hijjah 8, it is recommended for all pilgrims to go to Mina where they spend the rest of the day and the night, performing five prayers there, namely Zhuhr, `Asr, Maghrib, `Isha’ and the Fajr of Dhul-Hijjah 9, shortening the prayers of Zhuhr,`Asr, and`Isha’ to two rak`ahs.

After the sun rises on Dhul-Hijjah 9, pilgrims leave Mina to `Arafah. Staying in `Arafah is a major pillar of Hajj. The Prophet said, “Hajj is (staying in) `Arafah.”

The time for staying in `Arafah starts from the Zhuhr Prayer of Dhul-Hijjah 9 and ends at the Fajr Prayer on Dhul-Hijjah 10. Staying for any portion of time within this range is acceptable. The Prophet stayed in `Arafah until the sun set, and therefore some scholars hold that pilgrims should not leave `Arafah before sunset. The preponderant opinion, however, is that this is not necessary, especially if there is a need for leaving `Arafah earlier. In `Arafah you pray Zhuhr and `Asr, joining them at the time of Zhuhr if possible, and shortening each of them to two rak`ahs.

While being in `Arafah, you should busy yourself with dhikr, du`aa’, and asking for Allah’s forgiveness. The Day of `Arafah is a very blessed day. `A’ishah (may Allah be pleased with her) narrated that the Prophet (peace and blessings be upon him) said,

There is no day in which Allah frees a greater number of His slaves from the Hellfire than the Day of `Arafah. Allah comes close to His slaves and boasts about them to the angels, then asks (a rhetorical question): “What do these slaves seek?” (Muslim)

The Prophet (peace and blessings be upon him) also said,

The best supplication is that of the Day of `Arafah, and the best thing that I and other Prophets before me said, is:

There is no god but Allah alone. He has no partners. To Him belong the sovereignty and all praise. He has power over all things.

Mistakes to Be Avoided at `Arafah

One of the most serious mistakes that some pilgrims make is to stop outside `Arafah and then stay there until the sun sets, after which they leave for Muzdalifah. Those who stand in these places have not performed Hajj. There are big and clear signs showing the boundaries of `Arafah.

Some people think that they have to go to the place where the Messenger of Allah (peace and blessings be upon him) stood beside the mountain and to stand there. They put themselves through a great deal of trouble in order to reach that place. This is wrong. It was proven that the Prophet (peace and blessings be upon him) said, “I am standing here but all of `Arafah is the place of standing.”

Some pilgrims think that the mountain by which the Prophet (peace and blessings be upon him) stood is holy, so they go and climb it seeking blessings from the stones and soil around it. These are unacceptable bid`ahs (innovations in religion).

Some people think that it is essential to pray Zhuhr and `Asr Prayers with the imam in the mosque, seeking that place from far away. This causes them a great deal of difficulty and many of them go astray, which makes Hajj extremely hard for them, and they crowd one another and upset one another.

The Night of Dhul-Hijjah 9

After spending some time in `Arafah, preferably from Zhuhr till Maghrib Prayers, you leave to Muzdalifah. On your way from `Arafah, keep remembering Allah and seeking His forgiveness.

On reaching Muzdalifah, join Maghrib and `Isha’ Prayers at the time of the latter; three rak`ahs for Maghrib and two for `Isha’.

If you fear that you may miss these prayers due to the throng of people at Muzdalifah, then you may perform prayers on your way to it. Then when you reach Muzdalifah, you can sleep till dawn. This is the Sunnah of the Prophet. However, according to some scholars you can leave after midnight. The Maliki school even holds that it is adequate to pray Maghrib and `Isha’ in Muzdalifah, have a meal, and then leave for Mina. This opinion is preferred by the prominent scholar Dr. Yusuf Al-Qaradawi because of the huge number of pilgrims these years.

Take note of this: Muzdalifah is an open area; you will find no tents there. So remember to ask your journey’s organizers if they will provide you with blankets or sleeping bags; these will prove very useful, especially if it is cold that night.