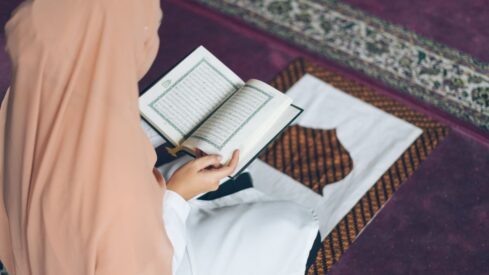 The Quran is the word of the Ever-Living God; it has been sent down to guide humans for all times to come. No book can be like it. As you come to the Quran, God speaks to you. To read the Quran is to hear Him, to converse with Him, and to walk in His ways. It is the encounter of life with the Life-giver.

(God—there is no god but He, the Ever-living, the Self-Subsisting (by whom all subsist). He has sent down upon you the Book with the Truth) (3:2-3)

For those who heard it for the first time from the lips of the Prophet Muhammad, the Quran was a living reality. They had absolutely no doubt that, through him, Allah was speaking to them. Their hearts and minds were therefore seized by it. Their eyes overflowed with tears and their bodies shivered.

They found each word of it deeply relevant to their concerns and experiences, and integrated it fully into their lives. They were completely transformed by it both as individuals and as a corporate body into a totally new, alive, and life-giving entity. Those who grazed sheep, herded camels, and traded petty merchandise became the leaders of mankind.

Today we have the same Quran with us. Millions of copies of it are in circulation. Day and night, it is ceaselessly recited in homes, in mosques, and from pulpits.

Voluminous exegetical works exist, expounding its meaning. Words pour out incessantly to explain its teachings and to exhort us to live by it. Yet eyes remain dry, hearts remain unmoved, minds remain untouched, lives remain unchanged.

Ignominy and degradation appear to have become the lot of the followers of the Quran. Why?

Because we no longer read the Quran as a living reality. It is a sacred book, but it tells us something of the past concerning Muslims and non-Muslims, Jews and Christians, the faithful and the hypocrites, who, once upon a time, used to be.

Can the Quran, 1,400 years later, be a living, relevant force, as powerful for us now as it was then?

This is the most crucial question that we must answer if we wish to shape our destiny afresh under the guidance of the Quran.

There appear, however, to be some difficulties. Not least of which has to do with the fact that the Quran was revealed at a certain point in time. Since then, we have traveled a long way, made gigantic leaps in technological know-how, and seen considerable social changes take place in human society.

Moreover, today, most of the followers of the Quran do not know Arabic; and many who do, have little idea of the living language of the Quran. They cannot be expected to absorb its idiom and metaphor, so essential to exploring and absorbing the depths of the Quranic meaning.

Yet its guidance, by its own claim, has an eternal relevance for all people, being the word of the Eternal God.

For the truth of this claim, it seems to me that it must be possible for us to receive, experience, and understand the Quran as its first recipients did, at least in some measure and to some degree. We seem almost to have a right to this possibility of receiving God’s guidance in its fullness and with all its riches and joys.

In other words, despite the historical incidence of the revelation in a particular language at a particular time and place, we should be capable of receiving the Quran now (because its message is eternal), capable of making its message as much a real part of our lives as it was for the first believers, and with the same urgent and profound relevance for all our present concerns and experiences.

But how do we do this?

To put it frankly, only by entering the world of the Quran as if God was speaking to us now and today and by fulfilling the necessary conditions for such an encounter.

First, we must realize what the Quran as the word of God is and means to us, and bring all the reverence, love, longing, and will to act that this realization demands.

Secondly, we must read it as it asks to be read, as Prophet Muhammad instructed us, as he and his Companions read it. Thirdly, we must bring each word of the Quran to bear upon our own realities and concerns by transcending the barriers of time, culture, and change.

For its first addressees, the Quran was a contemporary event. Its language and style, its eloquence and rationale, its idiom and metaphor, its symbols and parables, its moments and events were all rooted in their own setting. These people were both witnesses to and, in a sense, participants in the whole act of revelation as it unfolded over a period of their own time. We do not have the same privilege; yet, in some measure, the same ought to be true for us.

By understanding and obeying the Quran in our own setting, we will find it, as far as possible, as much a contemporary event for ourselves as it was then. The essence of man has not changed; it is immutable.

Only man’s externalities — the forms, the modes, the technologies — have changed. The pagans of Makkah may be no more, nor the Jews of Yathrib, nor the Christians of Najran, nor even the faithful and the unfaithful of the community at Madinah; but the same characters exist all around us. We are human beings exactly as the first recipients were, even though many find it extremely difficult to grapple with the deep implications of this very simple truth.

Once you realize these truths and follow them, once you come to the Quran as the first believers did, it may reveal to you as it did to them, make partners of you as it did of them.

And only then, instead of being a mere revered book, a sacred fossil, or a source of magic-like blessing, it will change into a mighty force, impinging, stirring, moving and guiding us to deeper and higher achievements, just as it did before.

This article is based on the book “Way to the Qur’an” by Khurram Murad, published by the Islamic Foundation. It is republished here with kind permission.