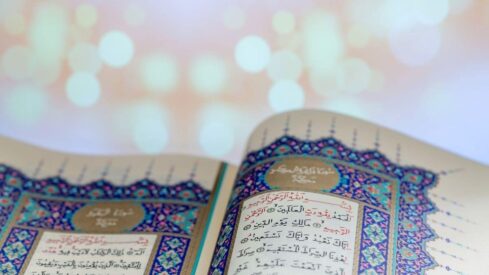 The precise and clear Quranic statement amazes you, in the minutes of its words and the depth of its choices. This shows a clear indication of the specialization of each word in it with a precise meaning, which is distinguished from others in the context – the light and brightness in the Noble Qur’an. If we knew Arabic, to replace a word in which there is another word, will not perform its meaning and replace it in any case, for the Qur’anic word is in love with its place, and is not replaceable.

This is what stopped the masters of commentators, and scholars of rhetoric in contemplation of the Qur’an and knowing the exact differences in the wording, for example, Allah says : (Their example is that of one who kindled a fire, but when it illuminated what was around him, Allah took away their light and left them in darkness [so] they could not see.) [Al-Baqarah 17]

What is the secret of the variance?

What is the difference in use?

The one who relaxes his mind says, synonyms, as used frequently by people as they speak.

As for Ibn al-Atheer (637 AH) – may Allah have mercy on him – in his book al-Atheer, the walking parable, tried to differentiate between them, so he was guided to say, “The illumination ‘diyaa’ in it is a sign of light, ‘nur’ and more. If he said: God took their illumination; The meaning would have given the disappearance of that increase, and the survival of the so-called light ‘nur’; Because illumination is excessive light…, and the purpose of his saying: (God has taken away their light) is to remove the light from them in the first place, and if he removes it, he has removed the illumination.”

And to his opinion, a group of commentators and rhetoricians relied, and it was strange for Ibn Abi Al-Hadid in the revolving astronomy! as he denounced Ibn al-Atheer with heavy and severe words; Like iron!

What was more, he reviled those who contemplate the subtle differences and meanings, and rhetorical taste depends on the delicate sense of graphic taste, which stems from an abundant scientific collection, and a deep rhetorical understanding.

The truth is that Ibn al-Atheer was not unique in this saying, as Imam al-Suhaili preceded him in saying this, in his book. but his saying is buried between lines, and this is the book with his interest in it explaining the Seerah of ibn Hisham, Except it’s a big treasure from the treasures of Bayann, Including many detailed interpretations of language, and this is the case of every scholar who excelled in his art, and who mixed his flesh and blood, cheering him on wherever he went and traveled in the orchards of science and knowledge. Therefore, Imam Al-Suhaili chanted what he had in mind,when standing at the house of Warqa bin Nofal, in which he said:

And there appears in the country an illumination of light. It resides in the wilderness that ripples.

He said: “This verse explains to you the meaning of light, and the meaning of illumination, and that illumination is spreading from the light, and that light is the origin and from it, it begins, and from it, it emanates and in the revelation: (when it illuminated what was around him, Allah took away their light  ) [Al-Baqarah 17]. And in it (He made the sun a brightness(illuminating) and the moon a light) [Yunus 5] because illumination does not spread from light what is spread from the sun. Also, in the Sahih, “prayer is light and patience is brightness/illumination” and that is because prayer is the pillar of Islam, and it is remembrance and the Qur’an, it forbids indecency and evil, so patience from evil and patience in obedience is the illumination that emanates from this light, which is the Qur’an and remembrance.” Ar-Rawd al-Anf 2/165

Light is brighter than illumination and it has degrees, starting from the beginnings of light and extending to degrees whose intensity and strength we do not know. And that illumination is a state of light, it is excessive light, and light is the origin and principle of illumination

That is why – Glory be to Him – described His light, saying: {Allah is the Light of the heavens and the earth.  } Nur:35 His light is great with no limits to it.

Since illumination is excessive light, it has intensity and heat, and it is not the gentle light that has no heat in it. Therefore, it fits the description of the sun with light, and the moon with illumination, in the Qur’an.

The Qur’an has many signs and expanded connotations and its meanings were multiplied by a wonderfully concise wording when the Almighty said: {but when it illuminated what was around him, Allah took away their light  }

When he described this kindled fire with intense glowing light, burning and hot, then Allah took away their light, not their illumination.

Until it comes to the whole meaning; By eradicating all the light that is the principle and origin of luminosity, and if their illumination was gone; It would have been possible for the illumination to go away, which is excessive light, with some light remaining. This expression was like this; accuracy and precision in place.

And in the indication of light here – also – a broad suggestion of meanings for the enlightened insights with the light of divine revelation, for it is the light of insights, just as the sensory light is the light of sight. Thus, when the hypocrites turned away from the light of revelation with their hypocrisy and disbelief, the light disappeared from them with all its meanings, its origin, its roots, and its luminosity. The light of sight and insight, for they have no light.

When you describe prayer with light, it is because it is the pillar of Islam, and patience is an extension of it, with the heat of patience and overcoming its hardships. It was described as luminous.

With the softest look, and the most thoughtful of thoughts in the minutes of the miracle of the statement; you find a deep and detailed description of the light of the believers in the Hereafter, which does not spread, but is specific to the person and the holder without the other, in the verse: {On the [same] Day the hypocrite men and hypocrite women will say to those who believed, “Wait for us that we may acquire some of your light.” It will be said, “Go back behind you and seek light.” And a wall will be placed between them with a door, its interior containing mercy, but on the outside of it is torment.} [Surat Al-Hadid 13]