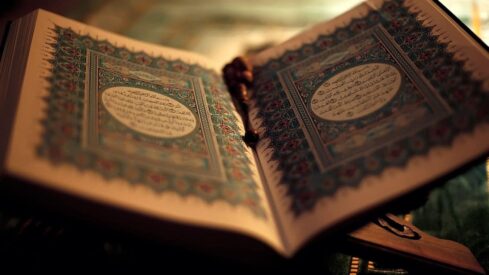 The growth and development of the Muslim Ummah is marked by two great phases:

– The period in Madinah, after the Hijrah.

Naturally the revelation from Allah to guide the Muslims also responded, to some extent, to these particular situations.

The Makkan phase of the revelation lasted about 13 years, from the first revelation up to the Hijrah. This phase is determined by the prime task of the Prophet to call people to Islam. The main themes of this call, based on the Qur’anic revelation are:

The role of the Prophet in this phase is in particular that of an announcer and warner.

The Madinan phase lasted about 10 years, from the Hijrah to the death of the Prophet (peace and blessings be upon him). While the basic themes of the Makkan phase remain, the factor of the Muslims’ growing together into a community and the formation of the Ummah, now makes its presence clearly felt.

In Madinah, there are four groups of people to be met:

In addition to these, the Qur’an also continued to address an-nas (mankind), that is, all people, and referred to the disbelievers and ignorant ones.

Surahs of the Qur’an have also been classified, according to their origin, into Makkan and Madinan surahs.

A surah is said to be of Makkan origin when its beginning was revealed in the Makkan phase, even if it contains verses from Madinah.

A surah is said to be of Madinan origin when its beginning was revealed in the Madinan phase, even if it has verses from the Makkan period in its text.

The following 85 surahs are, according to Az-Zarkashi, of Makkan origin:

There is a difference of opinion as to what was last revealed in Makkah. Some say, following Ibn `Abbas, that it was Surah 29 (Al-`Ankabut); others say Surah 23 (Al-Mu’minun); still others say Surah 83 (Al-Mutaffifun). Some believe that Surah 83 is actually Madinan.

The following 29 Surahs are, according to Az-Zarkashi, of Madinan origin:

Some hold that Surah 1 (Al-Fatihah) is of Makkan, others that it is of Madinan, origin.

The Makkan surahs constitute about 11, and the Madinan about 19 juz‘ (parts) of the text.

From the above division, it is obvious that the Madinan surahs are the longer ones and comprise a much larger part of the Qur’an.

According to a list based upon Nu`man ibn Bashir and given in Ibn An-Nadim’s Fihrist, the chronological order of the revelation of the surahs is as follows:

Importance of Knowing the Chronology

Knowing the origin and order of some of the revelation is important for understanding its meaning, which can often be more easily grasped if one knows the time and circumstances that relate to it. For instance, many verses from the Makkan period may be especially meaningful to Muslims living in a strongly un-Islamic environment, while some of the Madinan period would appeal much to Muslims who are in the process of formation of the Ummah. In some cases, unless one knows which of two or more related verses was revealed first, one cannot decide which legal ruling is now binding upon the Muslims. Here knowledge of the chronology is directly linked with the issue of naskh (abrogation).

Knowledge about the Makkan and Madinan surahs is derived from the Companions (Sahabah) and Successors (Tabi`un), and nothing is said about this by the Prophet himself. This is because at his time everyone was a witness and well aware of the occasions of revelation.

Often there is internal evidence as to which part of the revelation is Makkan or Madinan. There are a number of guiding criteria that help to distinguish between them:

The knowledge of Makkan and Madinan revelations is one of the important branches of `ulum Al-Qur’an (sciences of the Qur’an). It is not merely of historical interest, but particularly important for the understanding and interpretation of the respective verses.

Many surahs of the Qur’an do contain material from both periods of revelation, and in some cases there exists difference of opinion among scholars concerning the classification of a particular passage. However, on the whole, it is a well-established distinction, fully employed in the science of tafseer (exegesis) and best derived from the internal evidence of the text of the Qur’an itself.