Moses and Al-Khadr: Model of Resolution 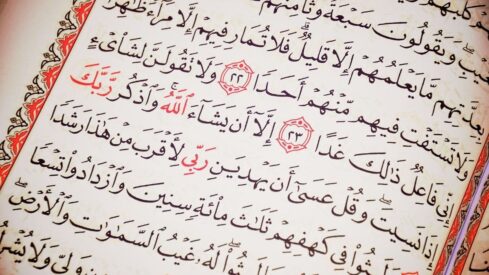 One of the stylistic tools used by the Glorious Qur’an to convey its message is narratives (qasas), which can be found in the Qur’an in different forms and for different purposes. The Qur’an relates the stories of the previous nations, stories of the prophets, descriptions of certain events, etc. All in all, the objective is clear: It is a teaching, glad tidings for believers, a reminder, and a warner. So in all the stories of the Qur’an, there is a lesson for people to derive, not just a narration or a mere tale-telling, as Allah says: “There is, in their stories, instruction for men endued with understanding. It is not a tale invented, but a confirmation of what went before it, a detailed exposition of all things, and a guide and a mercy to any such as believe.” (Yusuf 12:111)

One of these is the story of Moses and Al-Khadr, which, according to Abu Al-`Ala Al-Mawdudi in his beautiful commentary on the Qur’an, sends a message to man to have “full faith in the wisdom of what is happening in the Divine Factory in accordance with the will of Allah.”

In addition to that, the story reflects a true lesson of life for people, as it teaches us to have a true vision and to strive to attain our goals with determination and valour. This is reflected in the following verse: “Behold, Moses said to his attendant, “I will not give up until I reach the junction of the two seas or (until) I spend years and years in travel.”   (Al-Kahf 18:60)

In this glorious verse, Prophet Moses (peace be upon him) demonstrates an unflinching resolution in his course of attaining his goal, making it clear that nothing would stop him from reaching his goal, even if that requires him to travel for ages. And for this fateful journey one thing was clear in his mind: As long as he has ikhlas (sincerity) for the sake of Allah, success is his. This shows that having determination is one thing, but coupling it with ikhlas for Allah is something else; both are very important in everyone’s endeavour in life.

Also we should not forget necessary provision as an important ingredient in any life journey, just as the case is in this story. We have seen many times that a plan may fail due to poor logistics. This is an important point that tells us that no matter what you want to be, you have to prepare for it, and not only that, you also have to imbue yourself with strong determination coupled with ikhlas for Allah. All this will help you sail through, even amidst the turbulent ocean of life. Just remember Moses’ word: “I will not give up until I reach the junction of the two seas or (until) I spend years and years in travel.” (Al-Kahf 18:60)

Another point also derived from the story is keeping oneself steadfast in the face of difficulties. Allah says: “But when they reached the junction, they forgot (about) their fish, which took its course through the sea (straight) as in a tunnel. When they had passed on (some distance), Moses said to his attendant: “Bring us our early meal; truly we have suffered much fatigue at this (stage of) our journey.” He said: “Did you see when we took refuge on the rock, and I forgot the fish — and none but Satan caused me to forget to mention it — it took its way into the waters by a marvel.” He said, “This is that which we have been seeking. So they retraced their steps again.” (Al-Kahf 18:61-64)

In the above verses, we could see that the journey of life is full of hardships, and at the same time, it is full of surprises. It takes a lot of patience, wisdom, and courage to overcome life’s vicissitudes and to withstand its surprises. But as we journey, we have to be alert, for we will be passing through different signs of God; it is through signs that God speaks to us. He never lets us down, unless we do not grasp His message, and unless we fail to notice His signs. He (the almighty) says: “And how many signs in the heavens and the earth do they pass by? Yet they turn (their faces) away from them!” (Yusuf 12:105). Moses grasped the message of God through His sign, so he was guided to the spot of his mission: “He said: This is that which we have been seeking” (Al-Kahf 18:64).

How many of us have failed to notice the signs of our Lord, for failing to grasp His message leads us rambling around in the wilderness thinking that He has let us down. No, He never lets down any of His servants, especially those who call unto Him, believe in Him, and follow His instructions.

This is also an important lesson, especially for young Muslims. As they set out on their life journey they must be mindful of their Lord, for through His light they will see and will not get lost. They should listen to the following instruction of Prophet Muhammad )peace and blessings be upon him: “O young man, be mindful of Allah; He will protect you! Be mindful of Allah; you will find Him always there for you.” (At-Tirmidhi)

Another significant point in the story is when Moses realized that he had missed the track, his destination, he immediately turned back. One could imagine how gruelling this would be, especially to someone who had been traveling for a long time and thus been worn down with fatigue. But here Moses (peace be upon him), and of course his attendant, demonstrated exemplary courage and steadfastness, daring fatigue and weariness; he forgot the meal he had just asked for and retraced his steps to attain the precious goal.

This indicates that the moment we realize a flaw in our plan, in steps already taken, we should never hesitate to reverse the process to put things back to normal again without despair or boredom. With such courage and perseverance, we can bring everything within our reach and make our dream become a reality. We just need to remember Moses’s words: “I will not give up until I reach the junction of the two seas or (until) I spend years and years in travel.” (Al-Kahf 18:60)

This article has a list of mistakes people do on the day of Eid.