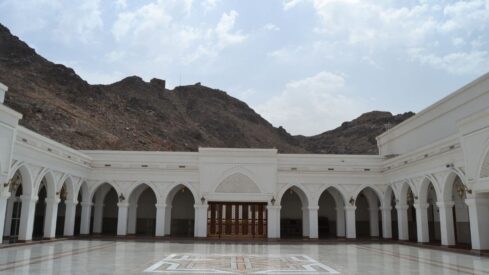 Mus`ab ibn `Umayr was born and grew up in the lap of affluence and luxury. His rich parents lavished a great deal of care and attention on him. He wore the most expensive clothes and the most stylish shoes of his time.

Mus`ab knew that Muhammad and those who believed in his message were gathering in a house near the hill of As-Safa to evade Quraysh harassment. Mus`ab went there and met the Prophet who welcomed him.

In this first meeting with the Prophet (peace and blessings be upon him), the young and decisive Mus`ab declared his acceptance of Islam.

After embracing Islam, Mus`ab’s concern was his mother who totally opposed his Islam, tied and confined him under her watchful eyes so as to prevent him from contacting Muhammad and his faith. Despite his ordeal, Mus`ab did not waver.

His Migration to Abyssinia:

Mus`ab heard that a group of Muslims were preparing secretly to migrate to Abyssinia to seek refuge and relief. His immediate thoughts were how to escape from his prison and join them. At the first opportunity, when his mother and his warders were off-guard, he managed to slip away quietly. Then with utmost haste, he joined the other migrants, and before long they sailed together across the Red Sea to Africa. For him, as for many other Muslims, life in Makkah was becoming more and more intolerable.

After about ten years of inviting people to Islam, most of Makkah still remained hostile. The Prophet (peace and blessings be upon him) then went to At-Ta’if seeking new adherents to the faith. He was repulsed and chased out of the city. At that time, the future of Islam looked bleak.

Mus`ab as an Ambassador to Yathrib:

It was just after this that the Prophet (peace and blessings be upon him) chose Mus`ab to be his “ambassador” to Yathrib to teach a small group of believers who had come to pledge allegiance to Islam and prepare Madinah for the day of the great Hijrah.

No doubt that Mus`ab was chosen for this task because of his noble character, his fine manners and his sharp intellect. His knowledge of the Qur’an and his ability to recite it beautifully and movingly was also an important consideration.

He entered Madinah as a guest of Sa`d ibn Zurarah of the Khazraj tribe. Together they went to people, to their homes and their gatherings, telling them about the Prophet (peace and blessings be upon him), explaining Islam to them and reciting the Qur’an.

Mus`ab continued to play a major role in the building of the new community. The next momentous situation in which we meet him was during the great Battle of Badr.

Mus`ab also participated in the battle of Uhud, and he fell a martyr in that battle. After that battle was over, the Prophet (peace and blessings be upon him) then cast his tender eyes over the battle field on which lay the dead Companions – including Mus`ab – and said: “The Messenger of Allah testifies that you are martyrs in the Sight of Allah on the Day of Judgment.”

Then turning to the living Companions around him he said: “O People! Visit them, send peace on them. By Him in whose hand is my soul, any Muslim who sends peace on them until the Day of Judgment, they would return the salutation of peace.”

Share Share
# The Prophet's companions # Islam
Read more in this series: "An Islamic Jurisprudence of the Environment"