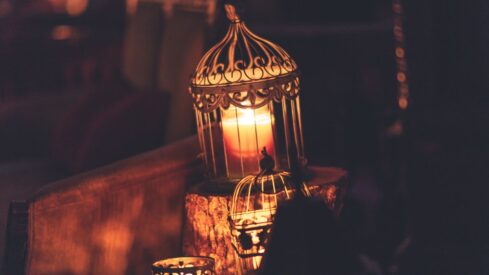 There are two dilemmas facing a Muslim living in the west today. The first is how to have a feast when every day is a feast. The point of Eid is feasting after fasting. We enjoy the abundance of food at Eid after the frugality of Ramadan. For a day or so we are encouraged to enjoy some of the special luxuries whilst the norm for the rest of the year is moderation and the pattern for Ramadan is extra restraint.

But what if chocolates and sweets are no longer treats but have become everyday food for children in this part of the world? What if people have come to expect cakes and biscuits at iftar as a reward for fasting? What is the thrill of roasted meat when a family eats meat at suhoor and meat at iftar all through the holy month? We all know the principle that the more you get the more you want, so what is the thrill for a child when daddy produces a bag of sweets just like you’ve had every day of the year? He would have to buy up the sweet shop to impress today’s children.

In a land where a pair of shoes can be bought for a couple of pounds and worn out and thrown out with the household refuse, what is the excitement of shiny new shoes? In a place where people chuck clothes into their trolley with the supermarket shop what is the thrill of the prospect of a new outfit? The dilemma – what to give the Muslim who has everything? How to make the indulged child satisfied?

Well, we have a secret weapon. As we know, by the grace of Allah few of us in this part of the world are wanting for clothes and food but what we crave is the company of good people. That’s what many of the Muslims here are losing caught up in the hurly burly of trying to amass material wealth. So Eid is a chance for many branches of a family to gather and spend time together. For some Muslims here, it’s the only chance they get to see the inside of a mosque and to meet their co-religionists. Though many ignore the advice of the Imam who every year lectures about proper dress on Eid, especially for ladies because he always give that advice before Eid, the newcomers can feel a particular pride at being part of this well dressed, sweet smelling congregation who have undergone the rigors of Ramadan and now stand in disciplined rows before Allah. It’s true that the women often get ticked off for talking through the khutbah (sermon) but it is usually because they are often placed in a room sealed off from the main congregation and have to contend with a fuzzy sound system. They are usually bursting with pleasure at greeting old friends and marveling at how great people look in their Eid best.

When children grow up and you ask them what they remember about `Eid, it will be these gatherings they will remember: the presence of beloved grandparents, aunts and uncles and their presents.

The second dilemma for Muslims in the west is how to compete with the Christmas scene. This has been particularly obvious in the past few years when Eid and Christmas have fallen around the same time. The Christmas celebrations no longer bear much relation to Christian teachings but they include elaborate, meticulous decorations, catchy songs, well organized parties and dinners, Santa and his grotto and the prospect of all the toys you ever wanted and if children are allowed to watch local TV they will see it. Schoolchildren are drilled in the nativity rites from early November. Some Muslim parents ask for their children to be excused whilst others don’t want little Hassan to be left out. The teachers are greatly concerned that Muslim children will miss out on the fun because Christmas has become a kind of multicultural knees-up which welcomes people of all religions and none. They are not reassured when we say, ‘it’s OK we have our Eid’. So if little Hassan is exposed to the full regalia of Christmas festivities who can blame him if when `Eid comes and faced with the prospect of a disorganized party in a tatty hall, he is less than over-awed?

It has taken Muslim communities a long time to get their party organizing genes into gear and the professionalism of Eid arrangements has improved. This is because when set against Christmas they have a lot to live up to. For parents brought up in the Muslim world, a little toy would have meant a lot. For their children they would have to produce two or three presents from the catalogue. The parents of their non-Muslim pals will have been saving all year to get their children all the latest toys. Who can blame the Muslim children for being materialistic when for many of them their parents or grandparents came to the west to improve their standard of living? Well, here it all is in abundance. For those brought up with all the luxuries in the west, the challenge is what to resist. ‘Eid is all about family Hamza’. ‘Yea right Mum. Now this is the video game I was talking about’.

Many of the older or newcomer Muslims living in the UK today did not have a tradition of organizing public events and doing it properly. It takes planning and plenty of help. Very hard in a community where everyone wants to be the mudir (manager) and no one wants to sweep the floor or shift the tables. On the 28th of Ramadan it dawns on someone. ‘Oh we’d better get something organized for `Eid!’ The Christmas committees will have planned and practiced for at least a month to put on their pageants, concerts and parties.

But things are getting better. As the generation of Muslims born here are becoming parents themselves, we have learnt from Muslims in the US for example and we can run our own show a bit better. The openness of Muslim hospitality provides a welcome refuge for the lonely and disenfranchised non-Muslims who have no family to go to. Even the government are endorsing our Eid. This year we are graced with greetings from the Prime Minister himself in a glossy magazine given out containing Eid listings. The shine is rather taken off the gesture by the fact that the publication comes complete with entreaties to Muslims to join the Navy or the Raf. Incidentally, the Raf accepts anyone regardless of nationality, religion, etc. and regardless of gender, except that is, if you are a woman. In the small print it says-‘for reasons of combat effectiveness women cannot join the Raf regiment’. What a disappointment we hear the Muslim women cry and there we were ready to join up after Eid! God help us! Everyone knows that the best Eid present the Prime Minister could give us would be to get his armies off our people’s backs and to stop arming people who love to kill Muslims. That’s really the limit, eh! Eid in the West .Eid Mubarak to you all and excuse us while we bomb the living daylights out of you.

It remains for me to pray that Allah accepts our fasting and our prayers.

This year I pray that Allah helps us turn our dua’ tears into actions so that future Eids will be a time of joy for all the Ummah and there will never be children who face `Eid morning with the same sense of dread as every other day of the year.

We are blessed. We are in the best religion.