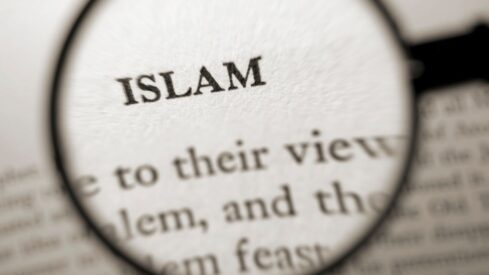 There is no doubt that each nation has the right to enact laws that guarantee the protection of its identity. By the same token, the Muslim nation should protect its identity, mission, and society against any external or internal danger by implementing penalties. Only ignorant people or oppressors would deny this right.
In Islam, the penalty of apostasy is meant to achieve the above-mentioned aim, namely to preserve the identity of the Muslim nation.
Then, let us think about what apostates actually leave behind. Do apostates forsake Islam, the religion of universality, tolerance, human brotherhood, justice, kindness even to non-Muslims, and freedom? No, most often, apostates leave Islam either because of misconception or due to their desires.
Islam is a religion and also a source of knowledge. Religion comes through divine revelation, while knowledge should be in tune with reality and based on clear evidence.

Accordingly, apostates who leave Islam do not have any sound proofs for their stance. Rather, they adhere to ignorance, doubt, blind imitation, and suspicion.
It should be noted that only the state has the right to remove any doubt if the apostate is truthful in seeking the truth. Nevertheless, it will be appropriate to quote the following dialogue between Al-Ma’mun and an apostate as follows:
Al-Ma’mun said, “To me, it is more beloved to save your life rather than to behead you, and to prove your acquittal rather than to assure your guilt. So why do you forsake Islam? Tell us so we can treat your disease. If our treatment benefits you, make use of it, but if you find it of no avail, you will be blameless.”

The apostate replied, “Your differences among yourselves caused me to forsake Islam.”Al-Ma’mun said, ” Differences among ourselves are of two categories. First, our differences over subsidiary (fari) issues of the Shariah, which are regarded as mercy and ease for people. Second, our differences in interpreting the revelation while we are in agreement regarding its origin. In this context, it is noteworthy that if Allah has willed, He would have made His revelation in no need of interpretation. Yet religion is always in need of efforts and searching, which require hard working and racing.”

Realizing the truth, the apostate proclaimed, “I witness that there is no god but Allah Who has no equal or son, that Jesus is His servant, that Muhammad (peace and blessings of Allah be upon him) is truthful, and that you are the true commander of the believers.”
Al-Ma’mun ordered his people to “save his honor and do not be kind towards him this day lest his enemies might say ‘He embraced Islam to gain the Muslims’ favor.’ Later, don’t neglect to support, aid, and console him.”

If we reflect on the above dialogue, we will see the peak of freedom, democracy, and tolerance. According to Ibrahim An-Nakhi, an apostate should not to be killed, but rather, should be advised about Islam and asked to repent. According to a narration of Umar ibn Al-Khattab, apostates should be asked to repent, but if they refuse, then they should be imprisoned.

We can conclude that the issue of the penalty prescribed for apostasy is dependent on the public interest of the nation. Therefore, there is no harm in ignoring the apostasy of an individual as long as he or she does not harm the nation. On the other hand, if a group of apostates endangers the security and interests of the Muslim community, then the Muslim ruler should consider them to be a danger and threat to society.

Quoted, with slight modifications, from Good Argumentation With the Doubters of Islam, translated by Wael Shihab, Egypt: Dar Al-Manarah for Translation, Publishing and Distribution, 2001.