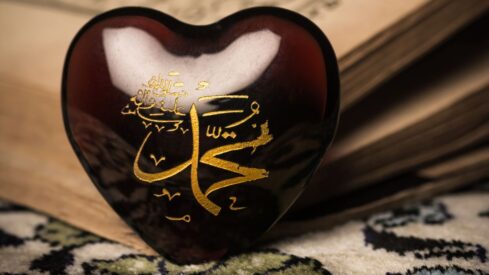 Before his mission, Muhammad’s life was relatively easy. He had a good and happy marriage, children, no financial worries
At age 40, Prophet Muhammad was an established trader and family man given to periods of contemplation and reflection.
He was a well-respected citizen of Makkah and the people were accustomed to coming to him to settle disputes, for advice and to look after their valuables.
All this however was about to change because during one of his periods of isolation and contemplation he was visited by the angel Gabriel and the verses of Quran began to be revealed to him.
His mission had begun; his life was no longer his own – it was now devoted to spreading the word of Islam.
Perhaps now some of the events in his life began to make sense. Perhaps he could see that God had planned things for him, for in retrospect we can see that the signs of Prophethood had been visible in many aspects and scenarios throughout Prophet Muhammad’s life.

Before his mission, Muhammad’s life was relatively easy. He had a good and happy marriage, children, no financial worries and no doubt was surrounded by friends and family who loved and respected him.
Declaring his Prophethood soon made him poor, a social outcast and his life was threatened on more than one occasion.
Greatness, power, wealth and glory were the furthest thing from his mind. In fact he already had these things, albeit on a small scale. He had nothing to gain from declaring a Prophethood and mission that were not true. Prophet Muhammad, his family and his followers were ridiculed, derided and physically beaten, his lifestyle drastically changed for the worst.
One of Muhammad’s companions said:
“The Prophet of God did not see bread made from fine flour from the time God sent him (as a Prophet) until he died.” (Al-Bukhari, 5413)
Another declared that:
“When the Prophet died, he did not leave either money or anything else except his white riding mule, his arms, and a piece of land which he left to charity.” (Al-Bukhari, 2739)

Before he died, Prophet Muhammad was the leader of an empire, with access to a national treasury but he lived simply, concerned only with completing his mission and worshipping God.
Despite his responsibilities as a Prophet, teacher, statesman, general, judge and mediator, Muhammad used to milk his own goats, mend his clothes and shoes, as well as help with the general household work.
Prophet Muhammad’s life was an outstanding example of humility and simplicity. His dress and lifestyle did not differentiate him from his followers. When someone walked into a gathering there was nothing about Prophet Muhammad that distinguished him from the other men in the gathering.
In the early years of his mission, long before there was even a remote possibility of success, Muhammad received an interesting offer from the leaders of Makkah.
Thinking that Muhammad must be making these claims of Prophethood for personal gain an envoy came to him and said:
“…If you want money, we will collect enough money for you so that you will be the richest one of us. If you want leadership, we will take you as our leader and never decide on any matter without your approval. If you want a kingdom, we will crown you king over us…”
For any human being, in any historical period this would be a very hard offer to turn down; however Muhammad had no wish for personal gain or recognition. Although there was only one condition to this generous offer it was one that went against everything that Muhammad now stood for. The Makkan leaders expected him to give up his call to Islam and to cease worshipping God alone, without any partner. Prophet Muhammad flatly refused the offer. (Al-Seerah Al-Nabaweyyah, Ibn Hisham, vol.1)

On another occasion Muhammad’s uncle Abu Talib feared for his nephew’s life and begged him to stop calling people to Islam. Again Muhammad’s answer was as decisive and sincere, he said:
“I swear by the name of God, O Uncle!, that if they place the sun in my right-hand and the moon in my left-hand in return for giving up this matter (calling people to Islam), I will never desist until either God makes it triumph or I perish defending it.”
Many means were taken by the disbelieving people of Makkah to tarnish Muhammad’s character and to belittle the message he was trying to spread. They were particularly merciless when disparaging the Quran itself.
They asserted vehemently that the Quran was not divinely revealed and that Muhammad wrote it himself. This was done to discourage people from following Muhammad or believing his claim to be a Prophet of God.
Prophet Muhammad did not write the Quran. He was an unlettered man, completely unable to read or write. He was unable to know or even guess some of the scientific facts that Quran mentions easily and often.
In addition to this, it makes sense to say that if the Quran had been written by Muhammad he would have praised and mentioned himself a great deal more. The Quran in fact mentions both Prophet Jesus and Moses many more times by name than it mentions Prophet Muhammad.
The Quran also reprimands and corrects Prophet Muhammad. Would an imposter prophet run the risk of making himself look like a person that can make mistakes?
Prophet Muhammad was an unlettered Arab trader. His life might have been unremarkable except that from the beginning of his existence God was with him, preparing him for Prophethood and preparing him to guide the whole of humanity into a new era of religious growth.

As Muhammad grew up, he became known to be truthful, honest, trustworthy, generous, and sincere. He was also known to be very spiritual and had long detested the overt decadence and idolatry of his society.
When we look at the life of Prophet Muhammad from the distance of time we can see clearly that his life was one of service to God, his sole purpose was to deliver the message.
The weight of the message weighed heavily on his shoulders and even at his final sermon he was concerned and asked the people to testify that he had delivered God’s message.
If Muhammad had wanted power or fame he would have accepted the offer to be the leader of Makkah.
If he had been looking for riches he would not have lived a simple life, dying with barely any possessions, unlike any other powerful leader of an empire.
The simplicity of Prophet Muhammad’s life and his unwavering desire to spread the message of Islam are strong signs of the validity of his claim to Prophethood.

Source: The Religion of Islam – http://www.islamreligion.com/