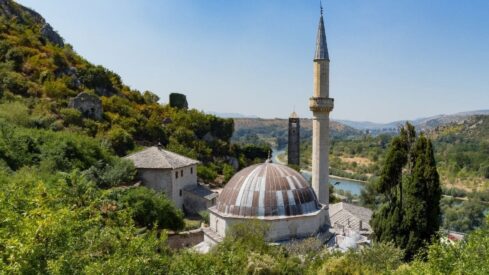 “Once a man already is,

He should try to be.

And once he is trying to be and he is,

As it often tends to be the case.”

I began the story of my journey to Islam with a quote from a famous Czechoslovakian actor, comedian, and philosopher. I did not pick this quote at random. There were a few reasons for my choice — starting with my admiration for this man inculcated in me by my parents — and ending with the similarity of my own life to the message of this quote. I always strived to be someone else, until I found myself through my discovery and acceptance of the faith in One God.

But let me start my story at the beginning and share it with you as it unfolded. I was born in a town in central Slovakia. I lived there during my early childhood according to the spirit of the times. I did not become interested in religion and the belief in God until I was about 10 years old. This is when I first visited a church and read the Bible.

I gradually became more interested in the historical events that had been mentioned in the Bible and began to make unpleasant, yet interesting discoveries. I was particularly fascinated by the contradictions between the New Testament and the historical facts. My doubts about the authenticity of the Gospels began here. It was only later when I started to realize the contradictions within Christianity itself. The truths and realities as stated in the Scripture were all too different from the visible realities in everyday life. Yet, I resisted exploring this any further because I didn’t want to “be.”

During my childhood, I was a carefree child who later became a youth without any interest in religion or God. My main interest was how to make it to the next day, month or year, and where and how to have some fun. Of course, I was still interested in history and education and it was thanks to this (but first and foremost thanks to God) that I gradually returned to the path of discovery and learning.

In hindsight, the key turning point was when I came across a certain book. In those days, it was very difficult to find books about religion and even more so about Islam. The book that opened for me the door to the study of the teachings of Islam and the Divine Message that God had left for humanity through the Prophet Muhammad (peace and blessings be upon him) was the historic work of Ibn Khaldun, Al-Muqaddima. Through this book, I gradually became familiar with the words Allah, Prophet Muhammad, Qur’an, Sunnah, and so on. I started to discover the teachings of Islam and I gradually started to “be.”

I came across Al-Muqaddima when I was in high school. I was a young person who, in addition to seeking fun, something that the young people typically do, began to discover myself, the meaning of human existence, and my relationship with the Creator. I longed to know more, to know God, the Qur’an, and myself.

Shortly before finishing high school, I started to think about what I should do next. My parents — especially my mother — wanted me to go on to the university to become a lawyer, an economist, or a doctor. Fortunately — or rather thanks to God — they did not insist. At that time I had made my decision. I wanted to study Islam. I wanted to leave home for a country where Islam was alive and present in its daily form.

My aim was to go to Egypt and study at the famous and respected Al-Azhar University. But the events took a different turn so I could write this story today. Perhaps out of fear or perhaps out of a sense of responsibility and dedicated love for my parents, I put conditions on my departure. I decided to send in my university application to the department of political science and law, intending to leave as planned should I not get admitted.

I didn’t spend much time preparing for the entrance exam, hoping I would not get in. But today I’m convinced that it was God’s will for it to happen otherwise. I ended up studying political science. Paradoxically, I received the highest score in the entrance exam and instead of going to Egypt, I went off to study in the “Rome of Slovakia” (the town of Trnava).

In my first year I continued to learn about Islam. In addition to Ibn Khaldun’s book, I learned about the Qur’an and in one of my term papers I even wrote on the topic of the Shari`ah and human rights. I started to feel that I was finally what I was — a man serving his God. But I was not a Muslim.

In addition to studying at the university, I also gradually learned the “benefits” of the university lifestyle. I stopped reading and searching for God and started to dedicate more of my time to partying, staying up late at night, and to drinking alcohol. All this was closer to me than “Egypt” which was becoming more distant by day.

Yet, I was doing well in my studies, and so I assumed, with satisfaction, that I was on the right track. From time to time, I did not feel like myself; I was unfriendly and aggressive towards my friends, and when I became alone I felt completely empty. But I was not paying too much attention to this initially. Bad days would follow good ones, but I thought this was the way it is supposed to be. Four years had passed and I had to choose my dissertation topic. I had quite a few ideas, but in the end I chose to write about Islam in Europe.

I began to work on it. I returned to the study of Islam. I was rediscovering things that I had frivolously thrown behind me a few years before. When writing my dissertation, I wanted to meet some real Muslims in an effort to get to know Islam at a more intimate level, not just from books. I had managed to contact an Islamic organization based in Slovakia.

I met a few times with Muhammad — the man to whom I am grateful for helping me with my dissertation and for reawakening my interest in reverting to Islam. But my story does not end here. Despite my resolve to become a Muslim, I was still too scared to make the final step. Most probably I wasn’t yet meant to “be.”

My dissertation turned out well and I successfully completed my studies. I was a university graduate who did not know what he wanted to be. What next? I again thought about Egypt, about Islam, and about life. Soon enough after finishing school I had managed to find a job — I became a teacher. Working with students — many of whom were my age — felt almost like the student life all over again.

Work, fun, and nothing else. After maybe a year, I realized that I was going down the very same familiar path, in the direction in which I had already once treaded. In May 2004, I decided to end this life. I longed to be finally what I wanted to be and what I was — a Muslim.

In the fall of the same year I decided to try fasting during the month of Ramadan. My friends made fun of me, my colleagues at work were perplexed, but I managed to complete this test with success. I had learned the Shahadah (testimony of faith in Islam) and I often repeated it to myself — either out loud or in my thoughts. But I was scared to move any further.

Finally, after a long period of hesitation, I decided to call my friend Muhammad, whom I had not seen for two years. I met with him shortly before Christmas 2004 with an intention to convert. I spent the following month reading stories of converts and pondering over how such a step would change my relationship with others, especially with my family.

After returning from the Christmas break, in front of the packed prayer hall in Bratislava, I finally recited my Shahadah on the day of Eid al-Adha celebration in 2005 CE (AH 1425). Looking into the eyes of dozens of Muslims, brothers from different parts of the world, I finally felt that I am “what I am supposed to be and not what I am not, as it often tends to be the case.” I was extremely happy and remain so until today. I have realized that since I already am created by God, I want to be a Muslim.