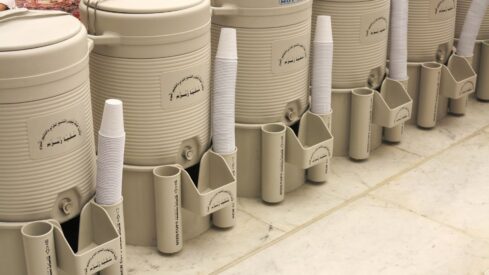 Come the Hajj season, and I am reminded of the wonders of Zamzam water. Let me go back to how it all started. In 1971, an Egyptian doctor wrote a letter to the European Press, saying that Zamzam water was not fit for drinking purposes. I immediately thought that this was just a form of prejudice against the Muslims and that since his statement was based on the assumption that since the Ka`bah was a shallow place (below sea level) and located in the centre of the city of Makkah, the wastewater of the city collecting through the drains fell into the well holding the water.

Fortunately, the news came to the ears of King Faisal, who got extremely angry and decided to disprove the Egyptian doctor’s provocative statement. He immediately ordered the Ministry of Agriculture and Water Resources to investigate and send samples of Zamzam water to European laboratories for testing the potability of the water.

The ministry then instructed the Jeddah Power and Desalination Plants to carry out this task. It was here that I was employed as a desalting engineer (chemical engineer to produce drinking water from seawater). I was chosen to carry out this assignment. At this stage, I remember that I had no idea what the well holding the water looked like. I went to Makkah and reported to the authorities at the Ka`bah explaining my purpose of visit.

They deputed a man to give me whatever help was required. When we reached the well, it was hard for me to believe that a pool of water, more like a small pond, about 18 by 14 feet (5.5 by 4.3 meters), was the well that supplied millions of gallons of water every year to Hajis ever since it came into existence at the time of Prophet Ibrahim (peace and blessings be upon him) many, many centuries ago.

I started my investigations and took the dimensions of the well. I asked the man to show me the depth of the well. First he took a shower and descended into the water. Then he straightened his body. I saw that the water level came up to just above his shoulders.

His height was around 5 feet, 8 inches (173 centimetres). He then started moving from one corner to the other in the well (standing all the while since he was not allowed to dip his head into the water) in search of any inlet or pipeline inside the well to see from where the water came in. However, the man reported that he could not find any inlet or pipeline inside the well.

I thought of another idea. The water could be withdrawn rapidly with the help of a big transfer pump that was installed at the well for the Zamzam water storage tanks. In this way, the water level would drop, enabling us to locate the point of entry of the water. Surprisingly, nothing was observed during the pumping period, but I knew that this was the only method by which one could find the entrance of the water to the well. So I decided to repeat the process. But this time I instructed the man to stand still at one place and carefully observe any unusual thing happening inside the well. After a while, he suddenly raised his hands and shouted,

“Al-hamdu lillah! I have found it. The sand is dancing beneath my feet as the water oozes out of the bed of the well.”

Then he moved around the well during the pumping period and noticed the same phenomenon everywhere in the well.

Actually the flow of water into the well through the bed was equal at every point, thus keeping the level of the water steady. After I finished my observations, I took the samples of the water for European laboratories to test. Before I left the Ka`bah, I asked the authorities about the other wells around Makkah. I was told that these wells were mostly dry.

When I reached my office in Jeddah, I reported my findings to my boss, who listened with great interest but made a very irrational comment that the Zamzam well could be internally connected to the Red Sea. How was it possible when Makkah is about 46.6 miles (75 kilometres) away from the sea and the wells located before the city usually remain dry?

The results of the water samples tested by the European laboratories and the one we analysed in our own laboratory were found to be almost identical. The difference between Zamzam water and other (city water) was in the quantity of calcium and magnesium salts.

The content of these was slightly higher in Zamzam water. This may be why this water refreshes tired Hajis, but more significantly, the water contains fluorides that have an effective germicidal action. Moreover, the remarks of the European laboratories showed that the water was fit for drinking.

Hence the statement made by the Egyptian doctor was proved false. When this was reported to King Faisal, he was extremely pleased and ordered the contradiction of the report in the European Press. In a way, it was a blessing that this study was undertaken to show the chemical composition of the water. In fact, the more you explore, the more wonders surface and you find yourself believing implicitly in the miracles of this water that Allah bestowed as a gift on the faithful coming from far and wide to the desert land for pilgrimage.

Some of the Features of Zamzam Water

This well has never dried up. On the contrary, it has always fulfilled the demand for water. It has always maintained the same salt composition and taste ever since it came into existence. Its potability has always been universally recognized as pilgrims from all over the world visit the Ka`bah every year for Hajj and `Umrah, but have never complained about it. Instead, they have always enjoyed the water that refreshes them. Water tastes different at different places.

Zamzam water’s appeal has always been universal. This water has never been chemically treated or chlorinated as is the case with water pumped into the cities. Biological growth and vegetation usually take place in most wells. This makes the water unpalatable owing to the growth of algae causing taste and odour problems.

But in the case of the Zamzam water well, there wasn’t any sign of biological growth. Centuries ago, Hajar searched desperately for water in the hills of Safa and Marwah to give to her infant son Isma`il (peace and blessings be upon him). As she ran from one place to another in search of water, her child rubbed his feet against the sand. A pool of water surfaced, and by the grace of Allah, shaped itself into a well that came to be called Zamzam water.