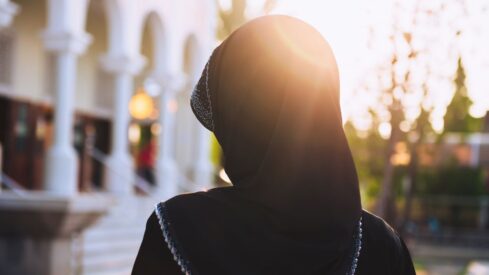 According to some scholars, it is allowed for Muslim women to take off hijab before other Muslim women as well as reputable non-Muslim women. So if this woman is a woman of character and integrity, you are allowed to treat her like anyone else and you can swim in her presence.

Muslim parents are allowed to send their children to public swimming lessons if they are under the age of puberty after having taken reasonable safeguards, such as sending them with proper attire for swimming and making sure there is no chance for girls and boys to be isolated.

If we have our own alternative ways of teaching swimming, then we must definitely avoid sending them to such public lessons. It is my firm opinion that Muslim communities in the West and non-Muslim countries have no excuse for not organizing their own swimming programs without the need to have recourse to non-Muslim instructors. Remember skills such as swimming are considered as fard kifayah (collective duty); therefore it is high time for Muslims to train their own people as instructors.

** Sheikh Ahmad Kutty is a Senior Lecturer and an Islamic Scholar at the Islamic Institute of Toronto, Ontario, Canada.