An Exalted Example of Character 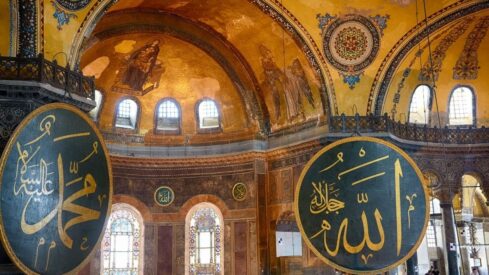 Referring to Prophet Muhammad (peace and blessings be upon him), Allah Most High says: “And you (stand) on an exalted standard of character” (Al-Qalam 68:4); “Ye have indeed in the Messenger of Allah a beautiful pattern (of conduct) for any one whose hope is in Allah and the Final Day, and who engages much in the praise of Allah” (Al-Ahzab 33:21).A Unique Character

The uniqueness of the Prophet Muhammad (peace and blessings be upon him) is that he was not only a great person in his own time, but he is great for all times, for all people of any race, colour, nationality or geographical location. His example was good for the 7th-century Arabs and it is good also for the humanity living now at the beginning of this 21st century. He is an excellent example for the rich and poor, for young and old, for rulers and ruled, for the most intelligent as well as the most common people. Allah sent him as His Prophet for all humanity. Allah says in the Qur’an: [Say: O people! I am sent unto you all, as the Messenger of Allah, to Whom belongs the dominion of the heavens and the earth: there is no god but He: it is He that gives both life and death. So believe in Allah and His Messenger, the unlettered Prophet, who believed in Allah and His Words: follow him that (so) you may be guided] (Al-A`raf 7:158).

Prophet Muhammad (peace and blessings be upon him) practiced what he preached. He very carefully and meticulously followed the Qur’an, Allah’s Word that was revealed to him. He followed and lived the Qur’an at every moment in every detail of his life. His life was the reflection of Allah’s Words. He became the Qur’an in person, the embodiment of the Qur’an, or one may even say in a metaphorical sense “the Word in flesh.” It is reported in a hadith: Sa`d ibn Hisham said that he asked `A’ishah (may Allah be pleased with her), “Tell me about the character of the Prophet (peace and blessings be upon him). She said, “His character was the Qur’an” (Ahmad).

Some of His Attributes

The morality of the Prophet (peace and blessings be upon him) was not restricted to just a few moral attributes, but included diverse traits and aspects of life. He was kind, compassionate, caring, generous and humble, but he was also strong, brave, eloquent, wise and insightful. He was a great planner, organizer and thinker, yet he was also a man of faith, trust and devotion to Allah. He was involved and active with his family and community but he did not neglect his prayers, fasting and devotion to Allah. Actually, he prayed so much that no one prayed like him. He was exemplary as a teacher, preacher, imam, leader, statesman, judge, commander of the armies as well as a husband, a father, a grandfather, a businessman, a neighbour, and a friend.

Before he received the honour of prophethood, he was known among the people of Makkah as “As-Sadiq Al-Amin,” the most honest and trustworthy person. He kept this character throughout his life. He never broke a pledge or promise. Even his enemies could not accuse him of being dishonest.

He was the most humble person. He used to mingle with the poor and sit with them. He stopped people standing up for him. He used to sit wherever there was a place available in an assembly and never sought a prominent or elevated place. The newcomers sometimes would not know who was the Prophet among the people. When he entered the city of Makkah as a conqueror leading a big army, he entered in a most humble manner. In a unique demonstration of humility his forehead was touching the saddle of his camel!

A Mercy to Mankind

He was the most merciful person. Allah called him [a mercy to the worlds] (Al-Anbiya’ 21: 107). He was merciful to his family, followers, friends, even enemies. He was merciful to young and old, to humans and to animals. Those who persecuted him in Makkah and killed his relatives and his followers, when they were defeated in the battles and brought as captives, were forgiven by him. He did not ever take revenge or retaliated. He was the most forgiving person.

Constancy was a very important aspect of his moral behaviour. Once he established some good way or practice he used to follow it and adhere to it always. He used to say “The most dear deed to Allah is the one that is performed regularly, even if it was a little” (Al-Bukhari).

Muhammad (the praised one), Ahmad (most praiseworthy), Hamid (the giver of praise and thanks), Ar-Rasul (the Messenger), An-Nabi (the Prophet), Shahid (the witness), Rashid (the righteous), Bashir (the giver of good news), Nadhir (the warner), Da`i (the caller to Allah), Hadi (the guide), Mahi (the remover of evil), Fatih (the conqueror), Ra’uf (the compassionate), Rahim (the merciful), Mujtaba (the chosen one), Mustafa (the selected one), Murtada (the well-pleasing in the sight of Allah), As-Sadiq (the truthful), Al-Amin (the trustworthy), Musaddiq (the confirmer of truth), Habib Allah (Allah’s beloved one), Safi Allah (the one selected by Allah), Naji Allah (the one protected by Allah), Shakur (the most grateful one), Karim (the noble one), Hakim (the wise one), Sayyid (the leader), Siraj Munir (the shining lamp), Jawwad (the generous one), `Adil (the Just), and Khatam Ar-Rusul (the final Messenger). May peace and blessings of Allah be upon him!

Excerpted, with slight modifications from, http://pakistanlink.com/religion.html