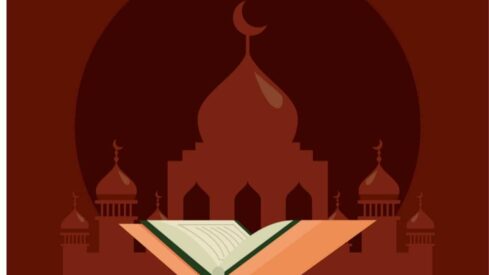 The guidance of the Noble Qur’an calls for building a person from the inside, his heart, his feelings and his will, so that if his condition remains in balance and moderation, and he settles on guidance from Allah, he will be able to face difficulties and crises and the worldly matters that are exposed to him, such as wealth, poverty, health, disease, and so on.

This character that the Qur’an wants is the one who does not rejoice in arrogance if he obtains what he wants from the comforts of this world, as Qarun rejoiced with his accumulated money out of ignorance of the way of Allah in examples like him. And one who does not become frustrated and grieve when he loses what he possesses or what he seeks, and does not become arrogant if he gains control of matters, and does not accept lowness and humiliation if  faced with the difficulties of life. The Almighty said: {And if We give man a taste of mercy from Us and then We withdraw it from him, indeed, he is despairing and ungrateful.* But if We give him a taste of favor after hardship has touched him, he will surely say, “Bad times have left me.” Indeed, he is exultant and boastful -* Except for those who are patient and do righteous deeds; those will have forgiveness and great reward.} (Hud 9-11). The commentators said: Mercy here is all that a person benefits or needs from his worldly affairs, and disbelief means that he is a disbeliever in blessings, and bounties are health, money, and so on. And the saying “Bad times have left me.”  means that they have left for no reason or because of something he has done or for some other wrong belief he has, I.e., they have left-according to his disbelief- not as a result of Allah’s blessings.

The content of the verses indicates that this character is of the nature of man, and only those who are patient and do righteous deeds are excluded from this, those who have been brought up through religion to bear hardships and give thanks for blessings, and what made them do that is nothing but the love of Allah and faith in the Last Day.

The Noble Qur’an calls on the Muslim to be a strong and solid in character that is not shaken by sermons and is not broken in the face of accidents, so he sits broken and does not find a way. The Almighty said: {Indeed, those who have said, “Our Lord is Allah” and then remained on a right course – the angels will descend upon them, [saying], “Do not fear and do not grieve but receive good tidings of Paradise, which you were promised.} Fussilat: 30 i.e. Do not be afraid of what you are doing in the affairs of your life, and do not grieve for what you have missed, because feelings of sadness, distress and grief are negative feelings that do not solve problems

Ibn Taymiyyah, may God have mercy on him, said: “Many people, if they see evil or change in many conditions of Islam, grieve and mourn as the people of calamities mourn, and he is forbidden from this, rather he is commanded to be patient and steadfastness on the religion of Islam and that the consequence is piety.” And about our poet Iqbal says:

The believers rely on the care of their Lord

No fear terrifies them, nor do they grieve in accidents

The generous self-confidence rises in him above time

Sadness is a deadly poison, do not drink the poison of sadness

Yes, a Muslim does not grieve the negative sadness that prevents him from working, and his habit becomes complaining or nostalgia for the past and does not present anything to the present, but the Muslim grieves the positive sadness, which is the length of the thought that leads to a feeling of responsibility, and this sadness keeps him away from trivial matters, luxury and amusement, and invites him Because of jealousy over what Allah has forbidden, and then he is preached with {Praise be to God who has relieved us of sadness. Indeed, our Lord is Forgiving, Most Merciful}.

And about building a healthy human personality, the Almighty said: {And do not turn your cheek [in contempt] toward people and do not walk through the earth exultantly. Indeed, Allah does not like everyone self-deluded and boastful.} Luqman 18. Sheikh Al-Ghazali, may Allah have mercy on him, says: “Arrogance is a childlike feeling of grandeur and pride, and a person’s talk about himself or his people with pride arises from ignorance or astonishment about the rights of others, and in Islam there is a continuous war against arrogance. The Messenger of Allah peace be upon him, said, “Allah, the Most High has revealed to me that you (people) should be humble, so that no one transgresses another, or boasts to the other.”  And the abundance of knowledge and the preciousness of talent should be covered with the cloak of servitude to Allah and a sense of His bounty” (The Five Axis in the Holy Qur’an / 206)

These Qur’anic directives created among Muslims a degree of moderation and balance that is unparalleled in any part of the world. It taught Muslims to face the difficulties of life and bear its restrictions without complaint or boredom, and called them to be strong, always.