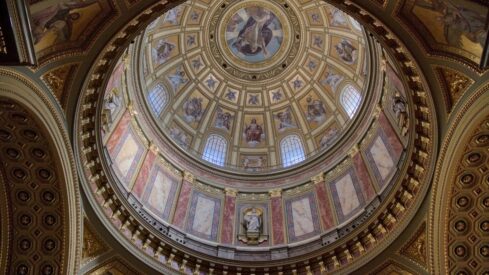 This day have I perfected your religion for you, completed My favor upon you, and have chosen for you Islam as your religion… (Holy Qur’an, Surah 5, verse 3)The Roman Catholic religion is dictated by the Pope from the top down to the priests at the bottom. If a Muslim were to walk into a Catholic church, it would be like walking into a different world. He would find row upon row of pews in which the worshipers sit, stained glass windows with perhaps scenes of the last supper or the Messiah carrying a cross, etc. On the front wall in all churches is the Messiah on a cross and below is an altar where the priest delivers his Sunday sermon. In some older churches, you may even find magnificent statue figures of Jesus, saints, Mary the mother of Jesus and so on. Church services are mainly repetitive rituals, singing, and prayers to Jesus or Mary or God and sometimes to saints. This is the type of world in which I lived and grew up most of my life.

If you were to ask me why I converted to Islam, my answer would fill volumes. However, if you were to ask me what led me to Islam I would have to say, now looking back, that it was my first encounter reading the Bible at the age of about ten. I used to sit bewildered reading the Bible into a tape recorder. After finishing, I would play the tape back in hopes of grasping the meaning of what I had just read, usually to no avail. So on Sundays I watched sermons on television, ordered free Bibles, and donated as much as I could (which could not have been much for a boy of ten) to the television evangelists. I received letters of gratitude and blessings and that made me feel good.

This continued for a year or so until finally I became too frustrated, lost, and honestly bored with the whole process. I tucked the Bible away in my dresser drawer, and I would only refer to it occasionally throughout my childhood and teenage years. I accepted the fact that I would never truly understand the Bible. That is, ironically, until later when I became Muslim. Only then did I begin to gain a complete understanding of it.

What had confused me reading the Bible then was the contradiction between the book and what I had been taught all my life by priests and religious pedagogues. I found that almost every aspect of my belief was shaken or simply did not make sense at all upon referring to the Bible. The very core of my faith, I had learned, was false. This brought me to the point in my life where I was pessimistic and cynical toward religion. I mocked my religion in my teens by going to church chewing gum and halfheartedly participating in services. I would grunt at the mere mention of God or Jesus. I did not know what I believed anymore. The only thing I was sure of was that there was a God. All of my confusion and disenchantment, starting from the age of ten, would ultimately trigger my quest for Truth and finally lead me to the religion called Islam.

My first encounter with Muslim people was through business dealings. Their warm and generous hospitality won my heart. Their loyal remembrance of Allah intrigued me in phrases like, al-Hamdulillah (all Praise be to God) and in sha Allah (God Willing). I have never come upon people in a state of such strong faith before. Their kindness, generosity, and compassionate nature, I would discover later, were all part of being a Muslim. I wanted to be like them. This is what attracts people to Islam; this is what attracted me.

I began to learn the basics of Islam. The more I learned the more I wanted to know. Before long, I was studying Islam through books written by Muslims in addition to reading a translation of the Holy Qur’an. Only a select few knew that I was studying Islam, since I did not want any interference from Muslims and especially from my Christian and Jewish friends. I knew that if anyone was going to guide and aid me in my quest for Truth it would be Allah.

As time passed, my knowledge expanded into realms of Truth hitherto unbeknownst to me. Islam became a powerful force like a magnet drawing me closer and closer to it. Allah was the only thing on my mind during the day, as I drifted to sleep, and the first thought when I awoke. Islam appealed to my intellect as well as my heart, and so my passion grew for it. I eventually learned Surat Al-Ikhlas (A chapter in the Holy Qur’an called Purity In Faith) and although I was not yet Muslim, I began to teach myself to pray using a book and reciting the only Surah I knew. I felt an overwhelming need to prostrate in reverence to the All Mighty to ask for forgiveness and guidance in the way that made most sense to me.

Shortly thereafter, I departed on a holiday taking the Qur’an with me. Four days later, alone in a foreign country, I became severely ill. I was bed stricken for a month each day losing almost a pound of my body weight. Facing my mortality and alone in my agony I remember pleading to Allah not to let me die incomplete. I had not yet converted but I knew in my heart that I wanted to be a Muslim. I was procrastinating trying to learn everything humanly possible. I now believe that this was my wake up call from the Most Merciful. That is to say that life is too short to put things off that you want to do. You never know if tomorrow will ever come.

Two weeks after my return to Canada, al-Hamdulillah (all praise be to God), I converted to Islam. al-Hamdulillah I did not die before saying the shahadah (Bearing witness that there is only ONE God & Muhammad is His Messenger and Servant). Allah is ever so Merciful. He gives people many chances and signs. The part that is difficult is not so much recognizing them, but rather acting upon them with all your heart.

Islam is like a medicine. It changes deviant behavior and soothes the sobbing soul. Islam is the religion of Truth and the Qur’an is the guide for all aspects of life. The Qur’an gave me all of the answers to my questions. It alleviated my confusion and turned it into clarity and understanding. Never did I know that there is a religion that is absolute Truth in its purest form. If all mankind only realized that this truth is the religion of Islam. I pray to Allah to guide all of us to the straight path. The path of all the Prophets of Allah including Abraham, Noah, Moses, Jesus, and Muhammad (peace be upon them all). Ameen.