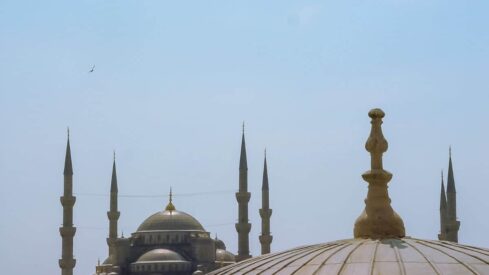 First, I would like to respond to the article by Rick Mathes and then answer your questions. Rick Mathes and his wife Trish are the founders of Mission Gate Prison Ministries, an outreach to those who are incarcerated and their families in Missouri and Illinois.

In the story, Rick Mathes claims that he told the imam: “Well, sir, I have a real problem trying to imagine Pope John Paul commanding all Catholics to kill those of your faith…”

In fact, most people will really have a number of problems with his story, which purports “to prove” that Islam demands its adherents to kill all others.

And what is more, isn’t it ridiculous to say that any belief system, not only Islamic, can be pushed down the throat of a human being at the point of the sword? Can’t you see that Islam has withstood the vicissitudes of fourteen centuries and is still outstripping all other faiths at an astonishing rate? Can a religion that preaches the killing of all outside its confines capture the minds and hearts of millions throughout history? Sorry, the Rick Mathes story does not stand to reason.

Now to answer the questions:

It must be evident to anyone who observes the Christian coalition or Zionist Christians that they are bent upon doing everything in their power to wipe out Islam from the face of the earth. For this they would stoop to any level; and this is no surprise, as St. Paul is their exemplar in their strategies. Read the following from his Epistles, which are foisted on the masses as the Word of God:

“But be it so, I did not burden you: nevertheless being crafty, I caught you with guile” (2 Corinthians 12:16).

What better illustration of hypocrisy can we give? For the sake of the truth, Paul will use all means of deceit in order to gain more followers. If St. Paul teaches this, can we really blame his present followers, the likes of Rick Mathes, Pat Robertson, or Jimmy Swaggart?

Please read this too:

“For if the truth of God, hath more abounded through my lie unto his glory: why yet am I also judged as a sinner?” (Romans 3:7).

Just think, if Paul really believed he had the truth, why should he use lies to make “the truth of God” “more abounded,” as he says?

Rick Mathes and his tribe adopt the same Pauline technique of using the lie as a means to promote Christianity at the expense of Islam. Even in the title, “Allah or Jesus?” the same guile is used. It really is funny how they try to advance “the truth” with falsehood!

2. Is it true that an “infidel” is a non-believer (like me)? If so, is it true that the Qur’an actually instructs Muslims to kill non-believers to guarantee them a place in heaven? If so, what are the exact words (or as near as they can be in translation)?

“Infidel” is an English word and we get its meaning from any English dictionary. Here is the definition from Dictionary.com: “An unbeliever with respect to a particular religion, especially Christianity or Islam.”

About Heaven we find the following among other verses in the Qur’an, on the same theme:

1. *{Verily We shall give life to the dead, and We record that which they send before and that which they leave behind, and of all things have We taken account in a clear Book [of evidence]}* (Ya-Sin 36:12).

2. *{Who receiveth guidance, receiveth it for his own benefit: who goeth astray doth so to his own loss: no bearer of burdens can bear the burden of another: nor would We visit with Our wrath until We had sent an apostle [to give warning]}* Al-Israa’ 17:15).

3. *{Those who do wish for the [things of] the Hereafter, and strive therefore with all due striving, and have faith,- they are the ones whose striving is acceptable [to God]}* (Al-Israa’ 17-19).

4. *{God will say: “This is a day on which the truthful will profit from their truth: theirs are gardens, with rivers flowing beneath,- their eternal Home: God well-pleased with them, and they with God: That is the great salvation, [the fulfillment of all desires]}* (Al-Ma’idah 5:119).

5. *{He that works evil will not be requited but by the like thereof: and he that works a righteous deed—whether man or woman—and is a believer, such will enter the Garden [of Bliss]: Therein will they have abundance without measure}* (Ghafir 40:40).

To continue on the subject of killing, it is true that God has permitted fighting; but this fighting must be against oppression and injustice, not against non-Muslims as such! Where innocent men, women and children are attacked, or when intolerable atrocities are committed, Muslims are asked to fight to protect the innocent and safeguard their rights.

Those who blame Allah—and this is just the Arabic name for God—for commanding the Muslims to fight can turn the pages of their own book and see how Joshua at Jehovah’s command “left none remaining, but utterly destroyed all that breathed, as the Lord God of Israel commanded” (Joshua 10:40).

I would particularly like to make it clear that the Qur’an does not instruct Muslims to kill non-believers to guarantee them a place in Heaven, as you have said. On the contrary, God commands the believers to invite others to His way in the most peaceful manner. In this call, the Muslims are commanded to appeal to their common sense and to their own faith in truth and justice. Most certainly God has categorically prohibited forcing anyone to accept Islam, let alone killing! The Qur’an says what means:

*{Let there be no compulsion in religion. Truth stands out clear from error: whoever rejects evil and believes in God hath grasped the most trustworthy hand-hold, that never breaks. And God heareth and knoweth all things}* (Al-Baqarah 2:256).

*{Goodness and evil can never be equal. Repel [evil] with good: then will he between whom and you was hatred become as it were your friend and intimate}* (Fussilat 41:34).

*{Invite [all] to the way of thy Lord with wisdom and beautiful preaching; and argue with them in ways that are best and most gracious: for thy Lord knoweth best, who have strayed from His path, and who receive guidance}* (An-Nahl 16:125).

From these verses it is clear that anyone who uses force to convert a non-Muslim or harm any human being on that score, breaks the divine command; and such a person is not what a Muslim should be.

3. What is jihad? Is this a real ongoing endless call for the murder of “unbelievers” (a bit like Bush’s War on Terror), or is it a metaphor describing the need to fight for what you believe in and share your faith with the doubters? Explain.

Jihad simply means “striving,” and any effort can be called a jihad. But in Islamic parlance, it stands for the Muslims’ effort to obey the commands of God in their life, even when the odds are against them. In certain contexts, as mentioned above, where fighting for truth and justice becomes unavoidable, that effort can also be called jihad. But today the word is terribly misinterpreted and misunderstood to mean “holy war.” The concept of a holy war comes from the Christian history of the Crusades. Islam never considers war as holy. Fighting is allowed in Islam only as a last resort, as a necessary evil, not as something holy. The Qur’an says what means:

*{To those against whom war is made, permission is given [to fight], because they are wronged;- and verily, Allah is most powerful for their aid…}* (Al-Hajj 22:39).