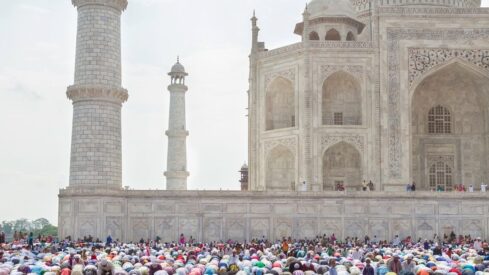 All praises are due to Allah, we praise Him and ask Him for His help, we seek His guidance, we ask Him for forgiveness, and we seek refuge in Allah from the evil of ourselves and our sinful actions. Whomever Allah guides no one can lead astray and whomever He misguides will find none to guide him aright. I testify that there is no god except Allah. He is One and has no partner. He gives life and causes death and He has power over all that exists. And I testify that Muhammad is His servant and messenger, the best of His creation, and His most beloved. He delivered the message, fulfilled the trust, advised the nation, removed the darkness from it, and strove in the path of the religion until his death. May Allah’s blessings and peace be upon him, his family, his Companions, and those who have trodden his path of excellence and followed his guidance until the Day of Judgment.

Dear Muslims, Allah the Almighty said to the believers: [This day I have perfected your deen for you, completed My Favor upon you, and have chosen for you Islam as your deen] (Al-Ma’idah 5:3). Yes, the favors of Allah upon us are many and cannot be counted. The greatest among them is that He has guided us to Islam. If He had not guided us to Islam, we would not have been guided.

When some of the Jews heard this verse, they commented that if such a verse had been revealed to them, they would have made this day an Eid because of the greatness of its meaning. When Umar (may Allah be pleased with him) heard their comment, he said, “I know the day and the place that this verse was revealed. It was revealed on the day of Arafah, on a Friday. Friday is already our weekly Eid and Arafah is our annual Eid.”

Allah the Almighty has completed and perfected this deen with a complete and comprehensive law. This law covers all aspects of human life. For this reason, in Islam, we can find law that covers our beliefs, acts of worship, behaviors, and all interactions, including social, political, and economical ones. It is no surprise, because the lawmaker is our Creator, the One Who knows what is best for His creation. Allah says: [Should not He Who has created know? And He is the Most Kind and Courteous (to His slaves) All-Aware (of everything)] (Al-Mulk 67:14).

Out of his mercy, Allah set aside two `Eids for Muslims to be holidays of happiness. They are also times when Muslims thank Allah for His blessings and bounties that He bestowed upon them. Allah says: [And if you count the Bounties of Allah, never will you be able to count them] (Ibrahim 14:34).

Allah made us to worship Him throughout the year and on special days and holidays. He multiplied the rewards of good deeds. Therefore, Eid Al-Fitr comes after the month of fasting (Ramadan), and Eid Al-Adha comes after Hajj and the day of `Arafah. This is the day when Allah forgives many sins of His servants.

Eids in Islam are not man-made; Allah is the One Who created them. He also laid down special rules and etiquette to be followed during these two Eids. Muslims should not transgress Allah’s laws.

Dear Muslims, we meet here this morning to pray and to listen to this sermon. We have gathered together in one place to worship Allah the Almighty — even though we have different traditions, speak different languages, and are of different colors.

This blessed meeting is practical proof that all Muslims form one body and one Ummah, as Allah says: [Truly! This, your Ummah is one Ummah, and I am your Lord, therefore Submit to Me (Alone)] (Al-Anbiyaa’ 21:92). This is how Allah wants us to be — a united Ummah.

This is why He ordained in this religion everything that strengthens the bonds of love and harmony. He even warned us against anything that could separate believers’ hearts. He says: [The Believers are nothing else than brothers] (Al-Hujurat 49:10). He also says, addressing the Prophet Muhammad (peace and blessings be upon him): [If you had spent all that is in the earth, you could not have united their hearts, but Allah has united them] (Al-Anfal 8:63).

Dear brothers and sisters in Islam, in this `Eid, let us remember the saying of the Messenger of Allah (peace and blessings be upon him) in which he described the believers: “The believers having love among themselves, being merciful among themselves, and being kind to each other are like one single body; If any part of the body is not well, the whole body shares the sleeplessness and the high fever with it” (Al-Bukhari and Muslim).

To further deepen this brotherhood among us, the Prophet (peace and blessings be upon him) ordered us to greet each other with peace upon meeting each other by shaking hands, smiling, and saying, “As-salamu `alaykum.” The Prophet (peace and blessings be upon him) once said, “I swear by Him in Whose hand is my soul, you will not enter Paradise until you believe, and you will not believe until you love each other. Do you want me to guide you to something which if you practice, you will love each other? Spread greetings of peace among you” (Muslim).

To deepen this brotherhood among us, the Prophet (peace and blessings be upon him) ordered us to be merciful, to help people in overcoming their hardships, and to help people in satisfying their needs. He (peace and blessings be upon him) said, “He who is not being merciful with the people, Allah will not be merciful with him.” And he also said, “A Muslim is a brother to another Muslim. He does not oppress him, He does not abandon him when he needs help; Whoever helps his brother when he is needed, and Allah will help him at the time of his need. And whoever clears a distress for a Muslim, Allah will clear for him one of the distresses of the Day of Judgment” (Al-Bukhari and Muslim).

The Prophet (peace and blessings be upon him) taught us through his manners and behavior how to tolerate the misbehavior of others. It was reported that a Bedouin had gone to the Prophet and grabbed his robe until it left a mark on his neck. The Bedouin then said, “O Muhammad, give me from the money of Allah that you have.” The Prophet (peace and blessings be upon him) looked at him and smiled; he then ordered money to be brought for him (Al-Bukhari and Muslim).

Dear Muslim brothers and sisters, after hearing all of this, we know the right way that we must follow in order to achieve brotherhood among us and to protect it against any threats.

In this blessed gathering, on this happy day, we have to start taking sincere steps towards love and harmony. Let’s forget what might have happened between us because of unintended mistakes. Let’s decide to achieve closer bonds in our relationships. Let’s remember everything that Allah asked us to do. Look at what Allah says: [Let them pardon and forgive. Do you not love that Allah should forgive you] (An-Nur 24:22).

Dear brothers and sisters in Islam, we today celebrate along with the whole Muslim Ummah, `Eid Al-Adha, which means celebration of sacrifice. To sacrifice on this day is the best thing a Muslim can do.

However, sacrifice for the sake of Allah is to be found in so many things in our lives. The sacrifice that Muslims are obligated to perform is the sacrifice of their time and relaxation to meet the duties and responsibilities required by their Lord and Creator, toward themselves and their families, toward their community and the whole world.

Allah has prescribed great responsibilities for us once we accepted Islam because it is the religion of duties and responsibilities. It is a great honor that Allah offered this to the skies, the earth, and the mountains and they refused to take it, but man took it although he is ignorant and unjust. That’s why man lost out except when he obeyed the orders of Allah. As Allah says: [By Al-Asr (the time). Verily! Man is in loss, except those who believe and do righteous good deeds, and recommend one another to the truth, and recommend one another to patience] (Al-Asr 103:1-3). This great responsibility is basically to have faith, to do righteous deeds, to join together to benefit from mutual teaching, and to be patient. As long as we ignore these duties and responsibilities in our lives, we will continue to have problems and difficulty in our lives.

Dear brothers and sisters, it is also greatly recommended for Muslims to greet one another on the day of `Eid, as the Companions of Prophet Muhammad (peace and blessings be upon him) used to do and say: “May Allah accept from us our good deeds.”

Finally, I hope this day will be a good day for us all and for the all Muslims all over the world. We pray to Allah to save the Muslims from their enemies and from the danger around them. We ask Allah to accept our good deeds, forgive our faults and mistakes, and beg Him to keep us on the straight path. We ask Him to give us the strength to be good examples of Islam as the Prophet (peace and blessings be upon him) and his Companions were. May Allah bring this day every year while you are in good health and condition. Peace, mercy, and blessings from Allah upon you all.

There are two dilemmas facing a Muslim in the west today- feasting and competing with Christmas.

The first House appointed for men was that at Bakka: full of blessing and guidance for all beings.