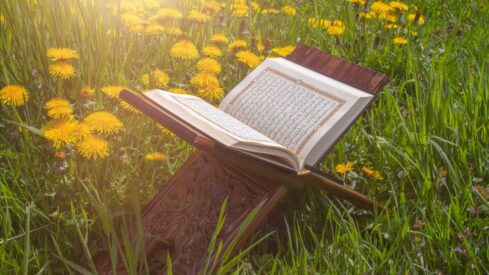 Adam was given the ability to reason, make choices and identify objects and their purpose. This helped to prepare him for his coming role on earth

Islam provides us with the astonishing details of the creation of Adam. Both Christian and Jewish traditions are remarkably similar yet importantly different to the Quran.
The Book of Genesis describes Adam as being made from “the dust of the earth,” and in the Talmud, Adam is described as being kneaded from mud.

In Islam there is astonishing details of that creation:
{And God said to the angels: Verily, I am going to place mankind generations after generations on earth.’ They said: ‘Will You place therein those who will make mischief therein and shed blood, while we glorify You with praises and thanks and sanctify You.’ God said: ‘I know that which you do not know.} (2: 30)

So begins the story of Adam, the first man, the first human being; God created him from a handful of soil containing portions from all its varieties on Earth. Angels were sent to earth to collect the soil that was to become Adam. It was red, white, brown, and black; it was soft and malleable, hard and gritty; it came from the mountains and the valleys; from infertile deserts and lush fertile plains and all the natural varieties in between.

The descendants of Adam were destined to be as diverse as the handful of soil from which their ancestor was created; all have different appearances, attributes and qualities.
Throughout the Quran, the soil used to create Adam is referred to by many names, and from this we are able to understand some of the methodology of his creation. Each name for soil is used at a different stage of Adam’s creation.

Soil, taken from the earth, is referred to as soil; God also refers to it as clay. When it is mixed with water it becomes mud, when it is left to stand the water content reduces and it becomes sticky clay (or mud).
If it is again left for some time it begins to smell, and the color becomes darker – black, smooth clay, from this substance God molded the form of Adam. His soulless body was left to dry, and it became what is known in the Quran as sounding clay. Adam was molded from something akin to potter’s clay. When it is rapped it produces a ringing sound.

{And (remember) when your Lord said to the angels: ‘I am going to create a human (Adam) from sounding clay of altered black smooth mud. So when I have fashioned him and breathed into him (his) soul created by Me, then you fall down prostrate to him.} (38: 71-2)
God honored the first human, Adam, in countless ways. Allah blew his soul into him, He fashioned him with His own hands and He ordered the Angels to bow down before him. And God said to the Angels:
“And We created you, then fashioned you, then told the angels: prostrate to Adam! And they prostrated except Iblees (Satan), who was not of those who make prostration” (7: 11)

While worship is reserved for God alone, this prostration by the Angels to Adam was a sign of respect and honor. It is said that, as Adam’s body trembled into life, he sneezed and immediately said ‘All praise and thanks is due to God;’ so God responded by bestowing His Mercy upon Adam. Although this account is not mentioned in either the Quran or the authentic narrations of the Prophet Muhammad, peace be upon him, it is mentioned in some commentaries of the Quran.
Thus, in his first seconds of life, the first man is recognized as an honored creature, covered with the infinite Mercy of God.

Adam was instructed to approach a group of Angels sitting near to him and greet them with the words Assalamo Alaikom (May God’s peace be upon you), they answered ‘and also upon you be God’s peace, mercy and blessings’. From that day forward these words became the greeting of those submitted to God. From the moment of Adam’s creation, we, his descendents, were instructed to spread peace.

God told mankind that He did not create them except that they should worship Him. Everything in this world was created for Adam and his descendants, in order to aid us in our ability to worship and know God. Due to God’s infinite Wisdom, Adam and his descendants were to be the caretakers on earth, so God taught Adam what he needed to know to perform this duty.

God gave Adam the ability to identify and designate names to everything; He taught him language, speech and the ability to communicate. God imbued Adam with an insatiable need for and love of knowledge: {He taught Adam all the names of everything.} (2: 31)
The Angels were given no specific knowledge or freedom of will, their sole purpose being to worship and praise God. Adam, on the other hand, was given the ability to reason, make choices and identify objects and their purpose. This helped to prepare Adam for his coming role on earth. So Adam knew the names of everything, but he was alone in Heaven.

One morning Adam opened his eyes and looked into the beautiful face of a woman gazing down at him. Adam was surprised and asked the woman why she had been created. She revealed that she was to ease his loneliness and bring tranquility to him.

Eve is Hawwa in Arabic; it comes from the root word hay, meaning living. Eve is also an English variant of the old Hebrew word Havva, also deriving from hay. Adam informed the Angels that Eve was so named because she was made from a part of him and he, Adam, was a living being.

Both Jewish and Christian traditions also maintain that Eve was created from Adam’s rib, although in a literal translation of the Jewish tradition, rib is sometimes referred to as side.

{And God said: ‘O Mankind! Be dutiful to your Lord, Who created you from a single person (Adam) and from Him (Adam) He created his wife (Eve), and from them both He created many men and women.} (4:1)
Adam and Eve dwelt in tranquility in Paradise, what, too, is agreed upon by Islamic, Christian and Jewish traditions. Islam tells us that all of Paradise was theirs to enjoy and God said to Adam:
{eat both of you freely with pleasure and delight of things therein as wherever you will…} (2: 35)
God continued his instructions to Adam and Eve by warning them {…come not near this tree or you both will be of the wrongdoers.} (2: 35)

In paradise Adam and Eve lived a tranquil existence and understood that they were forbidden to eat from the tree while Satan was waiting to exploit the weakness of them.

Satan is a creature from the world of the Jinn, a creation of God made from fire. They are separate and different from both the Angels and mankind; however, like mankind, they possess the power of reason and can choose between good and evil. The Jinn existed before the creation of Adam and Satan was the most righteous among them, so much so that he was elevated to a high position amongst the Angels:
{The Angels prostrated themselves all of them together. Except Satan, he refused to be among the prostrators. God said: ‘O Satan! What is your reason for not being among the prostrators? ‘Satan said: ‘I am not the one to prostrate myself to a human being, whom You created from sounding clay of altered black smooth mud.’ God said: ‘Then get out from Here for verily you are an outcast or cursed one. Verily the curse shall be upon you till the Day of Resurrection.} (15: 30-5)
Satan was there in the paradise of Adam and Eve and his vow was to misguide and deceive them and their descendents:

{He (Satan) said ‘surely I will sit in wait against them (human beings) on Your Straight Path. Then I will come to them from before them and behind them, from their right and from their left…} (7: 16-7)
An arrogant, Satan considered himself better than Adam, and thus mankind. He is crafty and cunning, but ultimately understands the weakness of human beings; he recognizes their loves and desires. He did not say to Adam and Eve “go eat from that tree” nor did he out rightly tell them to disobey God; he whispered into their hearts and planted disquieting thoughts and desires:

{Then Satan whispered to them that he might manifest unto them that which was hidden from them of their shame, and he said: Your Lord forbade you from this tree only lest you should become angels or become of the immortals.} (7: 20)

As their minds became filled with thoughts of the tree, and one day they decided to eat from it, Adam and Eve behaved as all human beings do; they became preoccupied with their own thoughts and the whisperings of Satan and they forgot the warning from God.
By Aisha Stacey