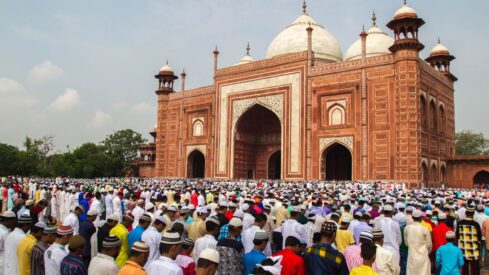 Many Muslims have contradictory feelings; one of joy on the occasion of Eid Al-Fitr, and sadness because of the attacks on Al-Aqsa Mosque, the Gaza Strip, and the occupied territories since 1948. We do not know whether we should rejoice or grieve. How do we rejoice on our holiday while sadness fills us because of what is happening in Palestine and our holy site?

However, joy and sadness are among the feelings all people experience, and the Muslim combines joy in what makes him happy in obedience to God, or what is good for him, and grieves when harm and sorrow befall him and his nation and for this reason Ibn al-Jawzi said in “the reminder in preaching” (p.: 31): “Blessed is a servant, if his Lord is good to him, praises and thanks him, and if he offends himself, he repents and asks forgiveness, and whenever he decrees a disobedience, he becomes sad and grieved, and whenever he’s granted the success to being obedient, he rejoices.”

The Muslim understands the nature of social life and that it is not a single color, but rather it is like the colors of the spectrum, dealing with every event in what suits it, “Life is not only joys and happy occasions, but it is joy and happiness, pleasure and sadness, wellness and distress, prosperity and hardship, smiles and tears, The true and conscious Muslim has his place in all of this, and he does not miss a part of it. He has on every side a message to perform, a word to say, and a duty to carry out.

The personality of the Muslim as formulated by Islam in the Book and the Sunnah, Muhammad Ali al-Hashimi (p.: 260): “Life is not only joys and happy occasions, but it is joy and happiness, pleasure and sadness, wellness and distress, prosperity and hardship, smiles and tears, The true and conscious Muslim has his place in all of this, and he does not miss a part of it. He has on every side a message to perform, a word to say, and a duty to carry out.

And one lives in changing conditions, and in them the poet said:

Eight runs on all people. and a person must meet the eight

There must be a balance between joy and sadness, and this balance is achieved by several things:

First – Belief in the Decree (Qadr):

Faith in the decree provides much relief when humans are afflicted with misfortunes and sadness, as he says: {Say, “Never will we be struck except by what Allah has decreed for us; He is our protector.” And upon Allah let the believers rely.} [Tawbah: 51], and he says: {but give good tidings to the patient, Who, when disaster strikes them, say, “Indeed we belong to Allah, and indeed to Him we will return” Those are the ones upon whom are blessings from their Lord and mercy. And it is those who are the [rightly] guided.} [Al-Baqara: 155 – 157]

Rather, a person does not reach the reality of faith, except by being satisfied with the decree of God and his destiny, as was reported on the authority of Abu al-Darda’ on the authority of the Prophet – may God’s prayers and peace be upon him and his family – he said: “Everything has a reality, and a servant has not reached the reality of faith until he knows that what struck him would not have missed him, and that what missed him would not have struck him.”

On the authority of Jaber bin Abdullah – may God be pleased with him – he said: The Messenger of God – may God’s prayers and peace be upon him and his family – said: ‘A slave (of Allah) shall not believe until he believes in Al-Qadar, its good and its bad, such that he knows that what struck him would not have missed him, and that what missed him would not have struck him.”

And the Prophet, may God’s prayers and peace be upon him, teaches us that all the affairs of the Muslim person are good, as he said: “How wonderful is the case of a believer; there is good for him in everything and this applies only to a believer. If prosperity attends him, he expresses gratitude to Allah and that is good for him; and if adversity befalls him, he endures it patiently and that is better for him”. (Muslim)

Rather, the good life is contentment and satisfaction as was mentioned by some of the predecessors. Abd al-Wahed bin Zaid said: Contentment is the greatest door of God, the paradise of the world, and the resting place for the worshippers.

One of the things that combines the balance between sadness and joy is that a person is patient with everything that is afflicted by him; because with patience, a person obtains everything he hopes for, and that is why God Almighty said: {Indeed, the patient will be given their reward without account [i.e., limit].} [Al-Zumar: 10].

And Abu Ubaidah confined himself, so Omar wrote to him saying: Whatever hardship comes down to a person, God follows it with relief, and that he will not overcome the hardship of two ease, and that he says: {O you who have believed, persevere and endure and remain stationed and fear Allah that you may be successful.} [Al-Imran: 200]

It may be that what you see will not last, and that you will see … a relief from the urgency of time

If hardship appears, ease is clear, then… God has decreed that hardship will be followed by ease

A person is not a machine that runs on one system, but a person is a soul, a body and feelings, and he is a social being that is affected by everything around him, if good it is good, and if evil it is bad, then a relative or friend may die, so we mourn his separation, and another friend may marry on the same day, we rejoice for his joy, and thus, the Muslim must perform his duty towards himself, his family, his brothers, his neighbors, and his nation, each according to his condition, whether he is happy or sad, or otherwise

However, with the manifestations of joy on Eid, we must not forget our duty towards Palestine, from praying for them and spending on them, for it is a legitimate duty that is not only recommended, and to spread their just cause, and to correct misconceptions, because the first battle is awareness, and to raise our children on the love of Palestine. The battle with the enemy is long, and preparation for it begins with education.