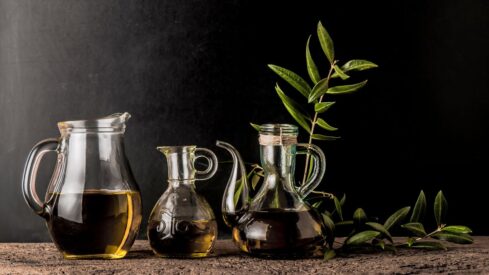 We can assume from this Hadith that the Prophet ate what suited his stomach. And what better time to eat the best and the most suitable foods than during Ramadan?

I have explored, in a five-part series, how some of the Prophet’s favorite foods are beneficial to our health. Part one deals with condiments; Part two, with fruits; Part three, with vegetables; Part four, with meat and milk products; and Part five, with grains.

In Bukhari (Volume 7: Book 65), Aisha narrates that, “Allah’s Apostle used to love sweet edible things and honey.” He also attributed many healing powers to honey. The Holy Qur’an (16:69) says, “From its [the bee’s] belly, comes forth a drink of varying colors wherein is a cure for people. Surely there is a sign for those who would give thought.”

Honey is not just a sugar, but also a complex combination of enzymes, organic acids, esters, antibiotic agents, trace minerals, and yet unidentified components! One pound of honey contains 1.4 grams of protein, 23 milligrams of calcium, 73 milligrams of phosphorus, 4.1 milligrams of iron, 1 milligram of niacin and 16 milligrams of vitamin C. Honey has been attributed externally with healing wounds and burns, and making the skin supple and smooth. Internally, honey is a cure-all, with specific benefits for the digestive system and as a tonic for general health and well-being.

The Prophet also advised us to, “Use olive oil as a food and ointment for it comes from a blessed tree” (Tirmidi, and the hadith is authentic). In Crete, a recent study showed that even though 90% of Cretans consume an average of 60-70 pounds of oil a year per person, the incidence of coronary disease is very low compared to other countries.

Olive oil also contains vitamins E and K, and polyphenols, which provide a defense mechanism that delays aging and prevents carcinogenesis, atherosclerosis, liver disorders, and inflammations. Oleates in the oil also promote bone formation in children and protect the bones of the elderly. Even The Journal of the National Cancer Institute reported that olive oil offers strong protection in the fight against breast cancer.

Contrary to popular modern belief, salt is also a beneficial condiment. The Prophet said, “Salt is the master of your food. God sent down four blessings from the sky – fire, water, iron and salt” (Ibn Majah and its chain is weak). UNICEF reports that the body needs only minute amounts of iodine (from iodized salt) to function properly. Yet, a lack of the nutrient causes various disorders, from stunted growth to cretinism, a most serious condition. Even mild deficiency produces mental impairment. Studies estimate that children living in iodine- deficient areas forfeit up to 10 to 15 IQ points.

Doctors often recommend replacing water and salt lost during exercise and when working outside in jobs such as agriculture. Increased salt intakes have been used successfully to combat Chronic Fatigue Syndrome as well. Dramatic deficiencies or “excessive” sodium intakes have been associated with other conditions and diseases such as stomach cancer. Testing the salinity of perspiration has proven to be a good test for cystic fibrosis.

The most talked-about effect of salt is the association of dietary sodium and elevated blood pressures (hypertension). However, the American Society published a good overview of recent scientific evidence as a supplement to The American Journal of Clinical Nutrition for Clinical Nutrition in February 1997, and the Medical Journal of Australia reviewed that debate earlier this year. They found that the kidneys efficiently process this “excess” sodium in healthy people. In fact, in cases of hypotension, genetic factors explain a quarter to a half of blood pressure variability – five times more than environmental factors such as stress, physical activity/exercise, smoking and, of course, diet. Among dietary risk factors, obesity is generally recognized as the most important followed by excess alcohol consumption and then salt intake.

In May 1998, JAMA published a large meta-analysis confirming a 1996 study and documenting, as well, a series of adverse changes to blood chemistry among those placed on low-sodium diets in clinical trials. All told, there have been six clinical trials, five of which were limited to randomized controlled trials. These provide consistent evidence of only a minor blood pressure response to a restriction of dietary sodium.

The Prophet has also called vinegar a “blessed seasoning” (Muslim). Modern science has confirmed that it indeed does have many “blessings.” A recent book called, simply, Vinegar talks about many ways in which vinegar benefits our health, and cites numerous scientific proofs of this claim. However, vinegar “miracles” were known even before the time of the Prophet (SAW). The first-century Greek doctor Dioscorides, who traveled widely with the Roman army, was a careful observer of the medicine of his time. In his writings, he describes the use of a substance he calls ‘oxymel,’ or sour honey, for arthritis-like pains.

Over the centuries, oxymel – a combination of apple cider vinegar and honey – has been widely used to dissolve painful calcium deposits in the body, and for other health problems such as hay fever. This is because apple cider vinegar is nutrient-rich, including amino acids, enzymes, manganese, magnesium, potassium, and silicon. It improves metabolism and can counteract the effects of excess lactic acid in the bloodstream released during exercise and stress.

It has also been used as a tonic to help those with arthritis, blood pressure, cholesterol, colds, constipation, cramps, diabetes, diarrhea, indigestion, muscle stiffness, and sore throat. In his over 300-page book Vinegar, D. Lawrence cites over 100 studies in praise of the condiment. Many more claims of vinegar’s benefits are documented in respected journals like Science Digest, The Pharmacological Basis of Therapeutics and The Journal of the American Medical Association.

Perhaps, though, the most important thing we can learn from Prophetic nutrition is moderation. As we sort through the wisdoms of Prophetic nutrition in our attempt to reconcile them with modern “science,” we must always remember what the Qur’an (20:8 1)
says, “Eat of the good things We have provided for your sustenance, but commit no excess therein.”