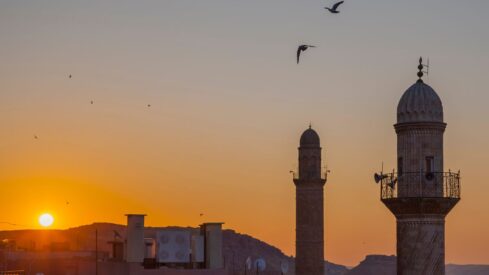 When the call is made for the sunset prayer, Maghrib, the Prophet tarries little before heading for the mosque.

He enters to find some of his companions already engaged in voluntary prayer. This is something he encourages saying:

Though he repeats it twice, he makes sure to add: “This is optional.” (Abu Dawud)

These two extra units of prayer are offered very quickly, since the time between the call for Maghrib and the commencement of prayer is very short.

When the Prophet arrives, congregational prayer commences. He always leads Maghrib at the earliest part of its time. There is still a good amount of light in the sky when the prayer is over. It is bright enough that a marksman would still be able to engage in target practice and make the bull’s-eye.

The Prophet rarely prolongs this prayer. He reads brief passages from the Quran. On one occasion, he reads the long chapter al-A`raf, and on another he reads al-Tur, but such occasions are rare. (The very last prayer he will ever lead his companions in will be the Maghrib prayer. On that occasion, he will read al-Mursalat.)

Prophet Muhammad does not sit and speak after Maghrib like he does after the other prayers. He knows that people want to get home and have dinner.

Prophet Muhammad returns home and offers two further units of prayer, which are the Sunnah prayers for Maghrib. Then he eats his meal. This is the usual time for dinner. Sometimes, if he is fasting, he takes this meal before Maghrib prayer. This is why he says:

“If dinner is served, then start with it before praying Maghrib. Do not be too hasty in eating dinner.” (Al-Bukhari)

Prophet Muhammad encourages his companions to invite the poor to share dinner with them. He likes to say:

Sometimes, when the Prophet has a good amount of food at his home, he might invite ten people to eat with him. At other times, he has nothing at home but dates and water. Then there are times when days go by and there is nothing at all for him to eat.  There is one evening when a man approaches the Prophet exhausted and emaciated, with signs of starvation written into the lines of his face. He says:

“O Messenger of Allah. I have fallen upon difficulties.”

The Prophet immediately sends the servant to the home of one of his wives to ask if there is any food to serve this distraught guest. She replies to the Prophet:

“I swear by Him who sent you in truth, I have nothing but water.”

He sends the servant to another of his wives’ homes, but she says the same thing. He receives the same answer from each of his wives in turn.  So the Prophet appeals to his companions:

“Who will be this person’s host today and receive Allah’s mercy?”

Abu Talhah speaks up and says:

“I will” (Al-Bukhari and Muslim) and takes the man to his home.

The Prophet eats his meals on a large mat that he spreads on the floor. He never eats off a raised table. When the food is served, he invokes Allah’s name and starts with what is immediately in front of him. He does not reach over to other parts of the mat. He eats with three fingers and instructs his followers to eat from the edge of the platter and leave the middle area, where the food is heaped, until the end of the meal. He says:

“This is where the blessings are.”

The Prophet does not make an issue out of his food. He eats whatever is ready at hand. He asks his family:

“Do you have anything for me to eat?”

“What an excellent condiment vinegar is.” (Muslim)

Prophet Muhammad never criticizes food. If he finds it palatable, he will eat it. Otherwise, he just leaves it alone.  When he eats in the company of his companions, he always engages in friendly conversation.

Occasionally, he speaks about more serious things, like etiquettes or religious knowledge, like the time he instructs Umar ibn Abi Salamah on table manners. Umar ibn Abi Salamah is the son of the Prophet’s wife Umm Salamah from a previous marriage. He is being raised in the Prophet’s household. Once when they are eating together, the child starts reaching all over the platter snatching up pieces of meat. The Prophet says to him:

“O child, start with Allah’s name, eat with your right hand, and eat from what is immediately in front of you.”  (Al-Bukhari and Muslim)

Later on in life, Umar will recall this incident and say:

“I have followed these table manners ever since.”

Once, the Prophet was sitting with his companions when they were served a dish of lamb on a bed of gravy-soaked bread. He was given from the shoulder, which is his favorite cut of meat. He takes a bite from it. Afterwards, he says:

“I shall be the leader of humanity on the Day of Resurrection. Do you know why? Allah will gather the entire human race, the first of them to the last of them, on one great flat plain. A summoning voice will be heard by everyone and they will all be exposed to plain sight and the sun will come near. Its heat will be unbearable. In desperation, some people will say to the others:

“Don’t you see the state you are in? Don’t you see what has overtaken you? Why don’t you find someone to intercede for you with your Lord?” Some of them will say: “Go to Adam…”

The Prophet then describes to his companions how the people will go to the various Prophets in turn, and all of them will decline to intercede for the people, until they approach him, and Allah will permit him to intercede on behalf of all humankind.

Whenever the Prophet finishes eating, he licks his fingers. He encourages his companions to make sure that all of the last remnants of food on the plate are sopped up and eaten, saying:

“You do not know in which part of your food the blessings lie.” (Muslim)

When the tablecloth is lifted off the floor, he says:

“Praise be to Allah, a bounteous, good and blessed praise.

Our Lord! You have fed us and given us drink. You have enriched us, fulfilled us, guided us, and sustained our lives. O Allah, yours is the praise for each and every thing that You provide.”

He washes his mouth after eating food. He also does so whenever he drinks milk. After dinner, he drinks nabidh, a local non-alcoholic beverage made from fruit that has been left soaking in water since morning. He also drinks this beverage after lunch, for which it is prepared from the night before.  When he takes dinner with one of his wives, he is warm and sociable while eating. He teaches:

“Even the morsel of food that you place in your wife’s mouth is a form of charity.” (Al-Bukhari)

Aisha tells us something of the playful manner in which she would take dinner with the Prophet, saying:

“Allah’s Messenger used to call me to eat with him. He would take a bone which had some meat on it and swear that I will have some of it. Then I would take a bite and put it aside. Then he would pick it up and place his mouth at the very place I had just taken a bite.

We can see from this the way Prophet Muhammad shows his wife how much he loves her. He turns the simple act of having dinner together into an expression of love and emotional sustenance for their marital life.