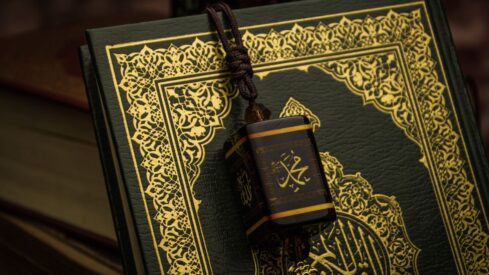 After the morning prayer, people in the mosque draw closer to Prophet Muhammad (Pbuh) assembling around where he is seated. They watch him as the rising sun casts its light upon his face, which is clear and honest.

Abdullah ibn Salam, a Jewish convert to Islam and companion of the Prophet, once said:

“When I first looked upon his face, I knew that it was not the face of a liar.” (At-Tirmidhi)

Sometimes, the Prophet gives a small sermon in the morning. Al-`irbad ibn Sariyah gives us an account of one of these sermons:

“Allah’s Messenger (peace be upon him) preached to us one day after the morning prayer. It was an eloquent sermon which brought fear to our hearts and tears to our eyes.

One of us said afterwards:

“This sermon seems like a farewell, so what do you enjoin upon us?”

He said: “I enjoin upon you to fear Allah, and to hear and obey even if an Ethiopian slave is made your ruler, for indeed, those of you who live on after me will witness a lot of dissention.

I warn you against newly invented matters, for they are misguidance. Those of you who come upon such matters should hold fast to my Sunnah and the Sunnah of the rightly-guided caliphs who come after me. Hold to it with all your might.” (At-Tirmidhi)

The Prophet always keeps his sermons short. He knew how to get his message across while holding the people’s attention.

For instance, he once asked after the black-skinned woman who used to volunteer to sweep out the mosque. They told him that she had passed away. Upon hearing this, he said:

“Why didn’t you tell me about it?”

He was upset. It was as if they had trivialized the matter.

They replied: “Messenger of Allah, she died last night and was buried. We did not wish to wake you up.”

On another occasion, the Prophet noticed the absence of Thabit ibn Qays ibn Shams and asked:

“What is the matter with Thabit? He is not to be seen. Does he have a problem?”

Sa`d ibn Mu`adh said: “He’s around. I do not know of him having any problem.”

Sa`d then went out to look for him and found him at home with his door shut. He was crying, and when Sa`d asked him: “What’s the matter.”

{O you who believe! Do not raise your voices above the Prophet’s voice, and do not speak to him loudly like you would to each other. You could negate your good deeds unknowingly.} (49: 2)

“I am a man with a very strong voice, and I am afraid that I have nullified my good deeds and am from those destined for Hell.”

The Prophet met with him thereafter and told him:

“You are not from those destined for Hell. Quite the contrary. You live in a good way and you will die in a good way. You are from the denizens of Paradise.” (Muslim)

We can see how the Prophet shows his concern for his companions. They are always on his mind and he never forgets about any of them. The Prophet gives attention to all those who are present and asks about those who are absent. In this way, he strengthens their sense of community and solidarity.

He then asks them about their dreams, saying:

“Whoever has had a dream, relate it to me. I will interpret it.”

He then hears their dreams and relates to them what Allah inspires him to say.

On one occasion, Abdullah ibn Salam related the following dream:

“I was in a vast, green garden, in the middle of which stood an iron pillar stretching far into the sky. At the very top was a handhold. A voice called out saying: “Climb.” I said I could not climb. Then a servant approached me and lifted the end of my robe from the back, and I rose up until I was at the top of the pillar. The voice then said: “Grab hold of it.” I grabbed the handhold and woke up.”

The Prophet interpreted it as follows:

“The garden is Islam. The pillar is the supporting pillar of Islam. The handhold is the trustworthy handhold. You will remain steadfast upon Islam until you die.”

True enough, Abdullah ibn Salam, who had been a Jewish rabbi before embracing Islam, lived for thirty-five years after the Prophet’s death, and he remained steadfast in Islam throughout his life.

On another day, the Prophet again asked his companions:

“Whoever has had a dream, relate it to me. I will interpret it.”

A man spoke up saying:

“Messenger of Allah, last night I dreamt that there was a cloud raining butter and honey. People were cupping their hands under it to collect it. Some received a lot and others received little.

There was also a rope hanging down from the sky until it reached the ground. You grab hold of it and climb up. Then a man follows you and climbs up. Another does the same. Then a third man follows suit, but the rope breaks. Then it is mended for him and he climbs up.”

Abu Bakr asked: “Messenger of Allah, I swear by God, allow me and I will interpret it.”

The Prophet said: “Go ahead.”

Abu Bakr said: “The cloud is Islam. The butter and honey that rain down represent the Quran in its sweetness and ease of style. Some people get more from the Quran than others. The rope descending from the sky is the truth that you are upon. You take hold of it, and Allah elevates you with it.

Another two men do the same, and Allah raises them up as well. Then another man follows but the rope breaks and is mended for him so Allah raises him up too.

Tell me, Messenger of Allah, am I right or wrong?”

The Prophet said to him:

Abu Bakr asked: “In what was I wrong?”

The Prophet replied: “You should not swear oaths.” (Al-Bukhari)

The Prophet related to them a dream of his own. First, he describes to them his dream, then he explains what it means. On one occasion, when the Prophet had asked:

“Has any of you had a dream last night?”

“But I’ve had a dream. Two men approached me and took me by the hands and brought me to the Holy Land… He then went on to describe some of the events that were to unfold in the Hereafter.” (Al-Bukhari)

The companions remain seated in the Prophet’s company and converse with one another. He listens to their conversation and participates in it.

Sometimes the conversation turns to their lives before Islam, and the foolish things they used to do without realizing how foolish they were until after God blessed them with Islam. They laugh when they recall how stupidly they used to behave. The Prophet smiles, since his laughter comes forth as a broad smile. They remain seated like this until the sun has risen high in the morning sky. Then the Prophet stands up and departs for his home. As he leaves the mosque, he says:

“In the name of Allah. May Allah’s peace and blessings be upon the Messenger of Allah. O Allah! Forgive me my sins and open to me the gates of Your bounty.” (Muslim)

The first thing the Prophet does when he gets home is brush his teeth to freshen his breath, Then he calls out a greeting to his family:

“Peace be upon you. How is everyone doing at home?”

He visits each of his wives in turn in her own private quarters. He greets them, invokes prayers for them, and stays with each for a little while. When he finds one of his wives is on her prayer mat engaged in prayer or the remembrance of God, he quietly leaves without disturbing her.

He asks generally if there is any food to be had.

As usual, he takes something very light. Today it is dates and cottage cheese.

Sometimes it is nothing more than a glass of milk or a date drink.

Once in a while, his wives tell him there is nothing to be had.

On those occasions, the Prophet replies:

“Then today I will fast.” (Ibn Majah)