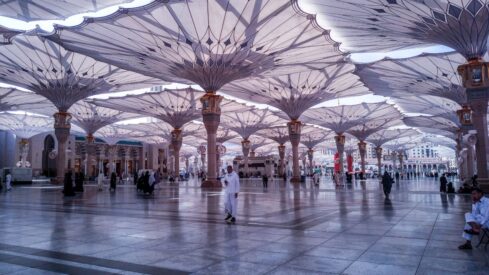 When the call for the late afternoon prayer, `Asr, is given, Prophet Muhammad waits for the people to gather at the mosque.

He encourages them to offer four units of voluntary prayer beforehand, saying:

“May Allah have mercy on those who observe four units before the `Asr prayer.”

Once everyone has gathered at the mosque, he enters. He leads the prayer in the early part of its time frame while the sun is still reasonably high in the sky. Anas tells us:

“No one was more punctual than Allah’s Messenger in offering the `Asr prayer.”

The Prophet stands in recitation about half as long as he does for the Dhuhr prayer. Afterwards, he turns to his companions. He sometimes likes to speak to them at this time. Today, he says:

“I do not know whether or not I should speak to you about something or remain silent.”

“O Messenger of Allah, if it is something good, then please speak to us about it. If it is otherwise, then Allah and His Messenger know best.”

“Whenever a Muslim purifies himself and does so thoroughly as prescribed, then offers these five daily prayers, those prayers will be an atonement for the sins that occur between them.”

This is similar to what he says on another occasion at this time:

“If any of you performs ablutions carefully and then says: ‘I bear witness that there is no God but Allah and Muhammad is His servant and messenger’, then the eight gates of Heaven will be open to him and he can enter through any one he likes. If any Muslim performs ablutions in an excellent manner and then offers two units of prayer with a fully devoted heart and countenance, then Paradise has become his due.” (Muslim)

At this time of day, he speaks briefly, unlike the long speeches he gives after the Dhuhr prayer. The people are tired and they need to complete their day’s work and prepare dinner.

After prayer, the Prophet returns home to his family. He spends some time with each of his households and shows them affection, but does not engage in any intimacy until he arrives at the home of the wife whose turn it is for him to spend the night.

Sometimes, his entire family gathers at that house, especially on winter days when the afternoon is too short for him to visit each of his households in turn. For instance, on one occasion they are all gathered at Aisha’s house. When the Prophet arrives, he inadvertently reaches out his hand to Zaynab bint Jahsh first. Aisha exclaimed:

The Prophet withdraws his hand, but the two women have already begun arguing and raising their voices. The two women are still at it after sunset when the Maghrib prayer is commenced at the mosque, and Abu Bakr comes by, hearing their loud voices. He calls out:

“Come, Messenger of Allah, and pray. May the mouths of both of them be smitten with dust!” The Prophet leaves the house. Aisha says:

“Now the Prophet is making up his prayer and my father Abu Bakr is going to deal with me.”

Sure enough, while the Prophet is at the mosque praying, Abu Bakr comes and says:

“Is this how you behave?” (Muslim)

He scolds her with harsh words. The Prophet always offers two units of voluntary prayer at home when he comes back from leading the `Asr prayer at the mosque. He does this in spite of the fact that he has prohibited his followers from offering voluntary prayers at this time.

He started doing so back on the day when the delegation from the tribe of `Abd Qays came to declare their acceptance of Islam. His attending to them prevented him from offering the two units of voluntary prayer he always offered after Dhuhr, so he made those two units up after `Asr. It is the Prophet’s personal practice that once he offers a prayer, he makes it a habit.

Therefore, he persisted thereafter in offering two units of prayer after returning home from `Asr. Aisha assures us:

“I swear by Him who took up his soul, he never left off observing two units after `Asr until the day he returned to Allah.”

The late afternoon is informal time that he spends socializing at home and engaging in familiar and affectionate talk with his wives. This does not mean that their conversations are superficial, or without substance. On some occasions, their discussions can take a serious turn.

For instance, on one occasion when he is at Aisha’s home, she asks him:

“Did you ever face a day more severe and intense than the Battle of Uhud?”

“Yes. I was subjected to worse things by your countrymen. The very worst I suffered from them was on the day of `Aqabah when I went to Ta’if to present Islam to Ibn `Abd Yalil ibn `Abd Kulal. He did not respond to me as I had hoped, and I had to flee from Ta’if in pain and distress. I did not recover until I arrived at Qarn Al-Tha`alib.

“O Muhammad, Allah listened to what your people said to you. I am the angel of the mountains, and my Lord has sent me to you so that you may give me your command. If you wish, I will bring together the two mountains that stand opposite each other at the extremities of Makkah to crush them in between.” But I said,

“No. I hope that Allah will raise from among their descendants people who will worship Allah alone, and not ascribe to Him any partners in worship.” (Al-Bukhari and Muslim)

We can see in Aisha’s question the deep concern she has for her husband’s feelings. This is why she asks him about the worst and severest day of his life.

We can also see in the Prophet’s account of that day the great favor that God has shown him. This is because the Prophet will live to see the day that the people of Ta’if embrace Islam, just as he had hoped.

Occasionally, after the `Asr prayer, some of his companions will ask him to attend to something with them. He complies with such requests. Once, a man from the clan of Banu Salamah says to him:

“We wish to slaughter a food camel that we have, and we would like you to be present.”

This is a big occasion for the man, since meat is scarce in the Prophet’s day and age. The Prophet accepts his request and goes with him, taking along some of his companions. They go to where the man is keeping the camel and it is slaughtered and sectioned. Then some of the meat is cooked so they can eat together before sunset.

This shows us how gracious the Prophet is. It is a hot summer day and the clan of Banu Salamah lives on the outskirts of Madinah to the north, at the farthest location from the mosque.

There is no reason to doubt that he goes all the way walking, simply to make their happy occasion more joyful by his presence. They will henceforth not talk to their neighbors about how they slaughtered a camel and had a feast, but instead how they had the Prophet as their guest who slaughtered the camel for them and shared in their meal.

The people of Banu Salamah will indeed talk about it for a long time.

The Prophet always hastens to share in the people’s happiness and make their occasions even happier. He is deeply loved by his companions.