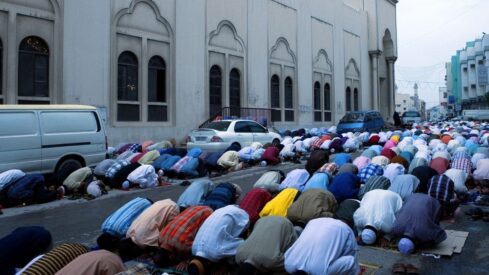 The Prayer is preceded by a sermon called a khutbah, which is delivered in two parts with a short break (about one minute) between the two parts.

The first thing to do in the mosque is to pray two rak`ahs of Sunnah Prayer, known as the tahiyyat or greeting of the mosque. Even if one arrives after the beginning of the sermon, he should pray two short rak`ahs before sitting down. While waiting for the sermon to start, one may recite Qur’an or listen to it being recited.

As the time approaches, the muezzin announces the first Adhan. Then the imam goes to the minbar (pulpit), faces the worshipers and greets them with, “As-Salaamu `alaykum!” (Peace be with you!)

He then sits down facing the congregants. At this moment, the second Adhan is announced, and the imam begins the sermon.

After the sermon, the two rak`ahs of Jumu`ah Prayer are offered in congregation. The imam recites the Prayer aloud.

By Ælfwine Mischler and Wa’il Shihab*