Living by the Qur’an 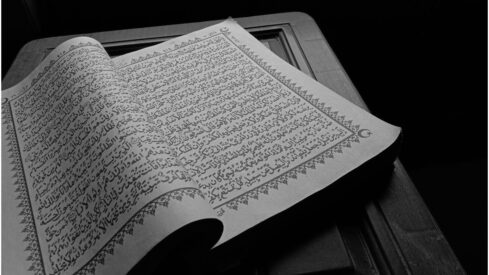 [Alif Lam Ra. This is a Book We have sent down to you so that you can bring mankind from the darkness to the light, by the permission of their Lord, to the Path of the Almighty, the Praiseworthy.] (Ibrahim 14:1)

Allah sent down the Qur’an for people to reflect upon, so that they can know that He is the only God, to learn how to worship Him, and to become heedful. The Qur’an, our only guide, provides us with explanations for everything we need, shows us the path which pleases Allah, and gives the good news of the great consequences of surrendering as a servant to Him:

[We have sent down the Book to you making all things clear and as guidance and mercy and good news for the Muslims.] (An-Nahl 16:89)

The Qur’an is the book Allah sent in truth to His servants. It is an admonition, a healing, and a mercy for believers. Believers who can grasp this important reality reflect deeply on every verse of the Qur’an and spend all their lives in compliance with it. Allah provides in the Qur’an the answer to any question they seek:

[We have brought them a Book elucidating everything with knowledge, as guidance and a mercy for people who believe.] (Al-A`raf 7:52)

Since the Qur’an explains everything relevant to being a servant to Allah, man is responsible for living by the Qur’n, observing its limits, and complying with its commands. On the Day of Reckoning, people will be questioned based on this book alone.

Therefore, never forget that the way you conduct yourself, your thoughts and decisions—in brief, your entire way of life—should be in compliance only with the Qur’an, and not with what the majority of people want. Living by the Qur’an is the unique way to salvation.

Moreover, it is necessary to read and comprehend the Qur’an in order to live by the religion revealed in it, even though those around you may be far from complying with it. The majority of people might have never read the Qur’an. Among those who are familiar with the Qur’an, on the other hand, there may be those who only memorize verses in Arabic without reflecting on their meaning. They may even consider the Qur’an as a kind of amulet (Surely Allah is beyond all that which they falsely ascribe to Him) and thus keep it on the upper shelves of closets. But if what you want to accomplish is salvation, you need to comply with Allah’s commands, not those of the majority of people. You need to read the admonitions Allah has sent down and know by heart His commands. The reason why the Qur’an was revealed is made clear in the following verses:

[It is a Book We have sent down to you, full of blessing, so let people of intelligence ponder its Signs and take heed.] (Saad 38:29)

As is seen in the above quoted verses, Allah informs us that only the people of intelligence, who have the faith described in the Qur’an, can take heed. The Qur’an is made easy for us to reflect and take advice:

[“Am I to desire someone other than Allah as a judge when it is He Who has sent down the Book to you clarifying everything?” Those We have given the Book know it has been sent down from your Lord with truth, so on no account be among the doubters.] (Al-An`am 6:114)

Aside from that stated in these verses, there is yet another fact we need to keep in mind: The Qur’an is a guide for believers; whereas it may misguide disbelievers. Those who do not believe that they will be gathered in the presence of their Lord on the Day of Judgment and that the Qur’an is the book in truth sent by the Lord, fail to grasp the divine purpose of its verses. They remain deaf and blind towards them. This condition is related in the Qur’an as follows:

[When you recite the Qur’an, We place an obscuring veil between you and those who do not believe in the hereafter. We have placed covers on their hearts, preventing them from understanding it, and heaviness in their ears. When you mention your Lord alone in the Qur’an, they turn their backs and run away.] (Al-Israa’ 17:45–46)

Undoubtedly, this attitude of the disbelievers results from their insincerity and their inclination to follow their whims and desires. Examples of this inherent lack of understanding among the disbelievers are as follows:

[We have only appointed angels as masters of the Fire and We have only specified their number as a trial for those who are disbelievers; so that those who were given the Book might gain in certainty, and those who believe might increase in their faith, and both those who were given the Book and the believers might have no doubt; and so that those with sickness in their hearts and the disbelievers might say, “What did Allah intend by this example?” In this way Allah misguides those He wills and guides those He wills. No one knows the legions of your Lord but Him. This is nothing but a reminder to all human beings.] (Al-Muddaththir 74:31)

Believers, on the other hand, are of an entirely different state of mind. As soon as they hear Allah’s verses, they conform to this most beautiful message, and thus, attain salvation both in this world and beyond. The attitude typical of a believer towards Allah’s signs is related in the Qur’an as follows:

[Allah has sent down the Supreme Discourse, a Book consistent in its frequent repetitions. The skins of those who fear their Lord tremble at it and then their skins and hearts yield softly to the remembrance of Allah. That is Allah’s guidance by which He guides whoever He wills. And no one can guide those whom Allah misguides.] (Az-Zumar 39:23)

Allah has informed us that believers with sincere faith will have the faculty to grasp the Qur’an as the book in truth. Only disbelievers harbor doubts about its justness:

[… and so that those who have been given knowledge will know it is the truth from their Lord and believe in it and their hearts will be humbled to Him. Allah guides those who believe to a straight path. But those who disbelieve will not cease to be in doubt of it until the Hour comes on them suddenly or the punishment of a desolate Day arrives.] (Al-Hajj 22:54-55)

People will be judged according to the Qur’an on the Day of Judgment. Allah reveals this truth in the following verse:

[So hold fast to what has been revealed to you. You are on a straight path. It is certainly a reminder to you and to your people and you will be questioned.] (Az-Zukhruf 43: 43–44)

That the majority of people are far removed from the Qur’an, and that they have almost abandoned it, should not deceive you. That is because, as people regard a lifespan of 60–70 years as guaranteed, they tend to wait for the later years of their lives as the appropriate time to follow the Qur’an. They wrongly conclude that living by the religion would deprive them of the pleasures of youth. By this insincere reasoning, however, they prepare a bitter end for themselves.

The sole guide that explains for you how to be a servant to Allah is the Qur’an. You must structure your life according to its commands. That is because, on the Day of Judgment, believers and disbelievers alike will be judged according to their obedience to the Qur’an. You can only hope to attain Paradise and deliverance from eternal punishment provided that you sincerely carry out what the Qur’an commands.