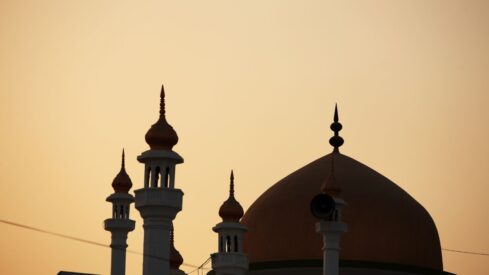 By God’s Divine wisdom, Prophet Muhammad (peace be upon him), in order to console the hearts of all orphans that would come after him, as he, the best of all mankind and the most beloved to God, was an orphan.

Muhammad used to care for orphans and he used to ask his companions to protect them and to treat them well. He also showed the merits that come from that.

“I and the custodian of an orphan are like this (together) in Paradise”, and he joined his forefinger and middle finger together.

The above Prophetic Hadiths show clearly that if someone takes good care of an orphan, he is sure to enter paradise by his good care.

Also, the Prophet praised a widow whose husband dies and would abstain from getting married again in order to devote herself to bring up her children. Sometimes the husband might pass away because of an accident or an illness at an early age leaving his wife with her orphan children.

Of course, she could get married again, but if she gets married the children would perhaps be lost or go astray. The new husband may not accept her with her children, and in this case she may have to put her children under the care of her parents who might be old: and with an elderly person, a young child might, quite often, get out of control.

A young widow who prefers to care for her children instead of getting married again was praised by Prophet Muhammad. Aouf Bin Malik Al-Ashjaii narrated that Prophet Muhammad said:

I and a woman with dark brown cheeks will be like these (i.e. together) on the Resurrection Day (and he joined his forefinger and middle finger together): a widow, although beautiful and noble, devoted herself for her orphans upon her husband’s death until they became strong enough or died.

Interpreters of the foregoing Prophetic Hadith, said that “a woman with dark brown cheeks” means a widow who abstained from getting married again and therefore she became pale with hard work and sorrow, and therefore the color of her cheeks became dark brown.

The foregoing Prophetic hadith shows clearly that the woman abstained from getting married to another husband, but consecrated herself to her children.

Now the question is: How dear is this young child to God so that the person who takes good care of them deserves Paradise.

The answer is implied within the two hadiths that there is no work in this life that is more noble or better than firmly establishing true faith in one’s children, taking good care of them, making them happy, and bringing them up to love God, His Messenger and his family.

“Tap on the heads of orphans, and feed the needy one.” (Ahmad)

I have a friend who died in a car crash at the age of thirty-five. He left behind a wife and three children. One day, I met one of his children, who was in the third secondary class. I asked him: “Do you need anything?” He said: “Yes, please. I need some help in the subject of Arabic.” I said: “Come to my place, and I‘ll give you some lessons.”

For the sake of my friend, I gave his son some lessons in Arabic. In fact, he was very weak in this subject, but I took care of him in a way that pleases Allah Almighty; and everyday I gave him a lesson until he became very good in Arabic and he passed his exams with high marks.

Every believer should be a parent for the orphan who lost one or both of his parents. If this orphan feels that people have mercy on him and treat him kindly, he will like them whether they are of their parent’s relatives or friends. In other words, the community of believers is cooperative and helpful to one another. God says in the Quran: {Have you seen him who denies religion? That is he who repulses the orphan.} (Al-Maun 107:1-2)

An orphan should not be repulsed, but should be treated kindly and gently. It is a great mistake to treat an orphan badly, but it is even worse to repulse him harshly, to humiliate him, or treat him unkindly.

Finally, we shall end up with this authentic Hadith: Abu Huraira narrated that Prophet Muhammad, peace be upon him, said:

“He who looks after a widow and a needy person is like a fighter for the Cause of Allah.”

“Like someone who stands up the night in prayer and worship and someone who is always fasting.” (Bukhari)