Muhammad’s Simple Life: A Proof of His Prophethood 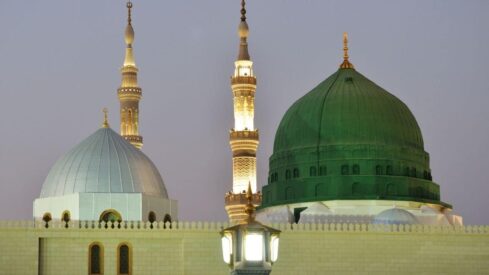 If we compare the life of Muhammad before and after his mission as a Prophet, we will conclude that it is unreasonable to think that Muhammad was a false prophet who claimed Prophethood to attain material gains, greatness, glory, or power.

Muhammad’s wife `A’ishah once said to her nephew, `Urwah ibn az-Zubayr, “O my nephew, we would sight three new moons in two months without lighting a fire (to cook a meal) in the Prophet’s houses.” Her nephew asked, “O Aunt, what sustained you?” She said, “The two black things, dates and water, but the Prophet had some neighbours of the Ansar who had milch camels and they used to send the Prophet some of the milk.”

Muhammad’s wife `A’ishah said, “The Prophet’s mattress on which he slept was made of leather stuffed with the fibre of the date-palm tree.”

`Amr ibn Al-Harith, one of Muhammad’s Companions, said that when the Prophet died, he left neither money nor anything else except his white riding mule, his arms, and a piece of land that he left to charity.

Muhammad lived this hard life till he died although the Muslim treasury was at his disposal, the greater part of the Arabian Peninsula was Muslim before he died, and the Muslims were victorious after eighteen years of his Mission.

Is it possible that Muhammad might have claimed Prophethood in order to attain status, greatness, and power?

The desire to enjoy status and power is usually associated with good food, fancy clothing, monumental palaces, colourful guards, and indisputable authority. Do any of these indicators apply to Muhammad? A few glimpses of his life that may help answer this question follow.

Despite his responsibilities as a Prophet, a teacher, a statesman, and a judge, Muhammad used to milk his goat, mend his clothes, repair his shoes, help with the household work, and visit poor people when they got sick. He also helped his Companions to dig a defensive trench by moving sand with them. His life was an amazing model of simplicity and humbleness.

Muhammad’s followers loved him, respected him, and trusted him to an amazing degree. Yet he continued to emphasize that he should not be deified; only Allah was to be worshiped. His Companion Anas reported that there was no person whom they loved more than the Prophet Muhammad, yet when he came to them, they did not stand up for him because he hated their standing up for him as other people do with their great people.

Long before there was any prospect of success for Islam and at the outset of a long and painful era of torture, suffering, and persecution of Muhammad and his followers, he received an interesting offer. An envoy of the pagan leaders, `Utbah, came to him saying, “If you want money, we will collect enough money for you so that you will be the richest one of us. If you want leadership, we will take you as our leader and never decide on any matter without your approval. If you want a kingdom, we will crown you king over us…” Only one concession was required from Muhammad in return for that, to give up calling people to Islam and worshiping Allah alone without any partner. Wouldn’t this offer be tempting to one pursuing worldly benefit? Was Muhammad hesitant when the offer was made? Did he turn it down as a bargaining strategy leaving the door open for a better offer? He answered with some verses of the Qur’an: “In the Name of Allah, the Most Gracious, the Most Merciful. Ha. Mim. A revelation from (Allah), the Most Gracious, the Most Merciful; a Book whereof the verses are explained in detail; a Qur’an in Arabic, for people who know, giving good news and warning, yet most of them turn away, so they do not listen.” (Fussilat 41: 1-4) And he recited until verse 38.

On another occasion and in response to his uncle’s plea to stop calling people to Islam, Muhammad’s answer was as decisive and sincere: “I swear by the name of Allah, O Uncle, that if they place the sun in my right hand and the moon in my left hand in return for giving up this matter (calling people to Islam), I will never desist until either Allah makes it triumph or I perish defending it.”

Muhammad and his few followers not only suffered from persecution for thirteen years, but the unbelievers even tried to kill Muhammad several times. On one occasion they attempted to kill him by dropping a large boulder on his head. Another time they poisoned his food. What could justify such a life of suffering and sacrifice even after he was fully triumphant over his adversaries? What could explain the humbleness and nobility that he demonstrated? Were they not due only with Allah’s help and not to his own genius? Are these the characteristics of a power-hungry or self-centred man?