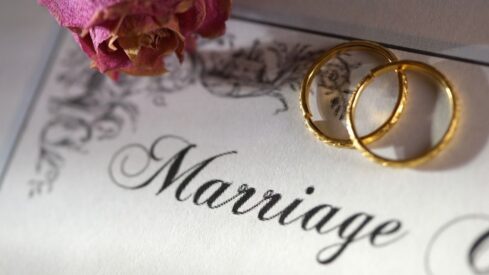 He bounded up the stairs so energetically that it was hard for me to believe that here was a man more than 80 years old — he had the vitality of a youth. Then I learned the reason why: Though he got married back in 1947 when he was about 30 years old, he was able to say to me, “I do not recall that I ever once got angry with my wife or that she was even once annoyed with me. And if I had a headache, it was impossible for her to sleep until after I fell asleep.”

Then he said with feeling, “I can never think of going out somewhere, even to purchase some household needs, without taking her with me and holding her hand. It is as if we are newlyweds.” When, because of a medical operation, she had become unable to bear children, he said to her, “You are more precious to me than children.”

He told me, “As long as she walks upon the earth, I could never even think of marrying anyone else.”

That man is a good example of how devotion can last even into old age. Unfortunately, when we look at the majority of people of any age, we can appreciate that his relationship is a rarity indeed, a sort of ideal.

Of course, we do not have to be held to such an ideal. Moreover, we should not go to our spouses and expect them to be like that when we ourselves have so many shortcomings.

(He created for you mates from among yourselves so that you can seek comfort in them and He has placed between you affection and mercy.) (Ar-Rum 30:21)

This is why each sex is drawn to the other in the first place, as if each person is looking for his missing other half.

When the wife of the famous jurist Abu Rabi`ah died, he carried out her burial himself with his own hands. However, when he returned home, he was overcome with grief and lamented to his Lord, his eyes filling with tears, “Now … my home has died as well. The home only lives for the woman who dwells inside it.”

Marital love requires extraordinary effort from both parties if it is to last and remain vital. The difficulty of marital love does not lie in those small disagreements that are a normal part of everyday life and that all couples have to work out. Indeed, such problems sometimes revitalize the relationship, like spice in a savory dish. The real problem lies in three things:

This is why it is necessary for people to understand the rules of the game when it comes to love.

Since marital love is prone to sickness and even death, it is imperative for couples to constantly work to revitalize and preserve it.

Husbands and wives must do the following:

A husband could say to his wife, “If I were sent back to the days of my youth, I would not choose anyone besides you for a wife.” Of course, the wife can easily say something similar to her husband.

Affectionate words have an effect, especially on women. They have, indeed, often been the weapons used by unscrupulous men to gain access to what is not theirs. Sweet words arouse a woman’s heart. A husband should take care to say them to his wife before someone else does.

If a wife finds that her husband has fallen asleep, she can give him a little kiss on the forehead, even if she thinks that he will not be aware of it. Indeed, on some level, his senses are working and even though he is asleep, he may very well be aware of it.

The Prophet (peace and blessings be upon him) emphasized the value of these little things, “…even the morsel of food that you place in your wife’s mouth (will be rewardable)” (Al-Bukhari and Muslim).

This type of behavior is governed by the tastes of the people involved. It may take some getting used to, but it really does not take a lot of effort. People who are not accustomed to such things may feel embarrassed just hearing about them and may prefer to leave matters the way they are rather than try to change their behavior and do things that they may see as ridiculous. Still, we must be willing to introduce new habits into our lives if we do not want our problems to go on forever.

Likewise, the husband might fall ill or come under a lot of stress. The wife must take these things into consideration. If people want their relationship to last, they must let each other feel that support.

We must accustom ourselves to living in the real world and to finding contentment in what Allah has decreed for us. We should not look longingly at what others have been given. Whatever little we have, will be a lot if we utilize it well.

It is quite possible that many who speak about their marital bliss and boast about their husbands and wives are untruthful in what they say—they just like to brag. The grass often does seem greener on the other side, but only because we are not looking at it up close.

*Excerpted with some modifications from “Nurturing Marital Love” on Islam Today.
**Sheikh Salman Al-Oadah is a prominent Saudi scholar. He supervises the website Islam Today.