Only the purified shall touch it 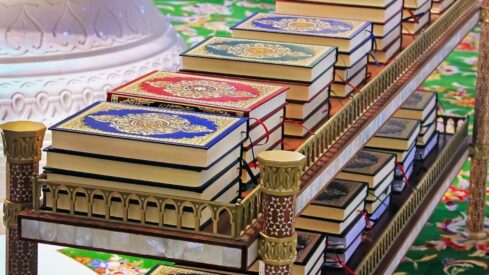 The meaning that only those who are purified can touch it in the words of Allah the Almighty: {Indeed, it is a noble Qur’ān.* In a Register well-protected* None touch it except the purified} (Al-Waqi’ah 77-79)

The imams agreed on the prohibition of touching the Qur’an or carrying it in the event of impurity, and not one of the companions disagreed with that, but Dawood and Ibn Hazm permitted it.

The majority who said that it is forbidden based it on this verse, on the basis that what is meant by the book is the Mushaf, and that touching is the well-known sensory touch.

This evidence has been discussed that the “Book” is interpreted by some of them as the Preserved Tablet, and only the purified ones touch it, meaning the angels. Others interpreted it as the previous books on the meaning that they contain a mention of the Qur’an and those to whom it was revealed. And it was also discussed that is the book mentioned was referring to the mushaf then the meaning of {None touch it except the purified} is that only those purified from polytheism touch it. Because the polytheists are unclean, so those who are allowed to touch it are the believers, whether they are pure or not.

Ibn al-Qayyim corrected in his book “Al-Tibyan fi Aqssam al-Qur’an” that what is meant by the book is that which is in the hands of the angels, and I mean that by the Almighty’s saying: {[It is recorded] in honored sheets * Exalted and purified, * [Carried] by the hands of messenger-angels, * Noble and dutiful.} Abasa: 13-16

He suggested this with ten pages that can be found in the second part of the Encyclopedia of the Family under the auspices of Islam (p. 213)

Those who are forbid to carrying the Qur’an or touching it without purity infer from the hadith “No one touches the Qur’an except the pure” narrated by Al-Nasa’i, Al-Daraqutni and Al-Athram. It is a strong hadith that was said to be similar to a Mutawatir, and it was said that it was Hasan. They also used the hadith “Do not touch the Qur’an unless you are pure” mentioned by Al-Haythami in “Majma’ Al-Zawa’id” with trustworthy men. They also inferred that Omar Ibn Al-Khattab’s sister prevented him from touching the scrolls she was reading. Because he was impure Al-Daraqutni narrated it.

The evidence for those who forbade it and the evidence for those who permitted it was discussed. This is in the case of ceremonial impurity. As for minor impurity (no wud’oo), the majority of scholars have prohibited touching the Qur’an and carrying it, and it was narrated from many companions and followers, and it was followed by the imams of jurisprudence Malik, Shafi’i and Abu Hanifa in one of the two narrations about him. Some scholars permitted that and it was quoted from a group of the predecessors, and Abu Hanifa went to it in a narration on his authority, and Dawood bin Ali permitted it.

And some of those who forbade touching the Qur’an and carrying it made an exception from the minor impurity – boys who did not reach puberty due to their need to memorize the Qur’an, and the same goes for the elders who need to memorize the Qur’an, so it is permitted for them to touch and carry it with minor impurity in order to facilitate the memorization of the Qur’an and not for the sake of worshipping by recitation, in that case purity is required for touching and holding it.