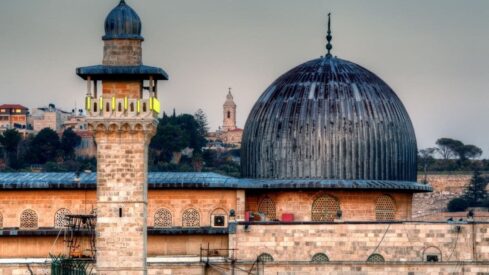 Indeed Islam is a religion of peace, yet it is also a practical religion that does not tolerate aggression and understands injustice has to be fought against. This takes place at a certain point, when pacifist methods do not change the situation.

Below are two cases when Muslims are to fight against injustice:

A. Fighting in Self-Defense:

Prophet Muhammad (pbuh) kept preaching the God’s message for years, without any kind of fighting. He endured the severe harmful effects inflicted upon him by the Arabs in Makkah, as well as that of the Jews in Madinah.

At that time, he had no permission from God (through the Qur’an) to fight back. Events then developed and polytheists used different methods to inflict harm on Muslims. Finally, they decided to kill the prophet!

When he (pbuh) learned of the intention, he immigrated to Madinah and was warmly welcomed by its people, who pledged allegiance to him in the cause of Islam.
The atheists were not content with the attempt to kill the prophet, but also provoked non-Muslim tribes against him, in order to put an end to his Message.

When the situation reached this stage, God gave permission to Muhammad to fight.
Upon examining closely the Qur’anic passages in which God requests Muslims to fight, we find them clarifying that war should be a means to drive away aggression and tyranny. God says in Surah 22, verses 39 – 40:

*{Permission is granted to those who are being persecuted, since injustice has befallen them, and God is certainly able to support them. They were evicted from their homes unjustly, for no reason other than saying, “Our Lord is God.” If it were not for God’s supporting of some people against others, monasteries, churches, synagogues, and masjids [mosques] – where the name of God is commemorated frequently – would have been destroyed. Absolutely, God supports those who support Him. God is Powerful, Almighty.}*

As for victorious Believers, God says in the following verse, number 41:

*{They are those who, if We appointed them as rulers on earth, they would establish the contact prayers [salat] and the obligatory charity [Zakat], and would advocate righteousness and forbid evil. God is the Ultimate Ruler.}*

In fact, according to Islam, military victory should not lead to expansion or dominance, as the case is with colonial regimes. Nor should it lead to control over sources of wealth, or to arrogance in the land to raise a race above another.

Victorious believers had better *{establish regular prayers}* to attain spiritual exaltation by worshipping God, and also to purify their souls. They *{establish the obligatory charity}* and thus, establish social justice by supporting the right of the needy to live a decent life. They *{advocate righteousness}* by spreading benevolence and right among people, and *{forbid evil}* by fighting against evil and corruption, uprooting them from society!

The prophet (pbuh) fought only to drive away aggression, after having received his divine orders, as it is revealed to him in Surah 2, verse 190:

*{You may fight in the cause of God against those who attack you, but do not aggress. God does not love the aggressors.}*

B. Fighting in the Cause of God:

The Islamic nation is commanded to establish justice on earth, and this requires Muslims to stand in the face of injustice and oppression, wherever they may be, and eradicate their causes. Nevertheless, they are not to take hold of the earth, enslave people or dominate their welfare, but establish the word of God on earth, without doubtful intentions.

*{You shall fight in the cause of God, and know that God is Hearer, Knower.}*

The Qur’an demands believers to fight in the cause of God, without any kind of worldly intentions or expectations? The following verses, of Surah 4: 74 – 75, revealed to the prophet in Madinah, clarify the aims of war:

A hint is made here that, in Islam, war is not for oppressing or enslaving people; it is waged for the cause of God and weak people, like those in Makkah who were persecuted and oppressed by the Makkan polytheists. It is the duty of every believer to support people like those and relieve them from oppression, people who no longer have any supporter and thus turn to God for refuge.

Evil means transgression of limits. Thus, when one transgresses limits, behaves arrogantly in the land of God, enslaves others and deprives them of their rights or of having a share in the riches of the earth, he is said to be fighting “in the cause of evil“. This is which God criticizes severely and considers as the motto of atheists.

The aim of fighting in the cause of God is to spread divine law, which calls for justice and freedom of religion in the world. This is without there being any selfish intent or arrogance in the land of Allah, as God wants the case to be typical to what He revealed in Surah 28, verse 83:

*{We reserve the abode of the Hereafter for those who do not seek exaltation on earth, nor corruption. The ultimate victory belongs to the righteous.}*

To this effect, Muhammad (pbuh) sent his delegates to eight neighboring rulers with messages, calling them to embrace Islam. The appeal was rejected. Some of them even killed the prophet’s delegates, while some tore the message and threatened the delegates who had brought it.

The rulers of the time were a clear obstacle in front of the individuals’ freedom and their right to live in justice or to choose their religion freely. Islam was the civilized step in the development of humankind, to which the despots of the time were considered a barrier. Thus, Islam declared war against an obsolete form of tyrannical governing. If Islam used force, then only to enforce justice that resulted in fascinating civilizations in every area, where Islam appeared.

“When the Arabs made ready to fight the Persians and Romans, these had already… [had] a history of oppression and tyranny, which exterminates citizens, inflicts unfair burdens on them, and kills their patriotic feelings and loyalty to rulers.

Mazdaism and Christianity branched into a number of major schools, which inherited only hostility and hatred, and inflicted suffering on each other… Thus, Islam faced no public resistance during its spread.. The Arabs were definitely more truthful, just and merciful.